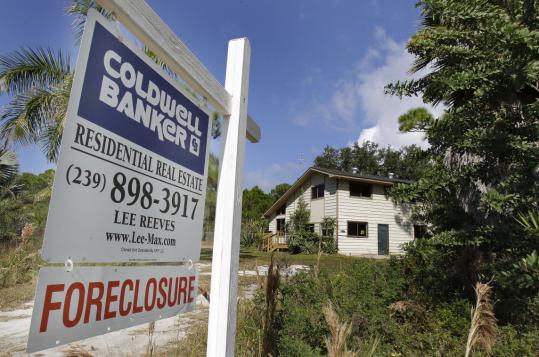 The foreclosure crisis followed a housing boom that had been fueled by borrowers being allowed to take out risky loans they could not afford. (Chris O’Meara/ Associated Press)
By Martin Crutsinger Associated Press / November 24, 2010

WASHINGTON — An Obama administration official says a preliminary investigation into the foreclosure process has found inexcusable breakdowns in the basic controls mortgage lenders should have been using.

Barr told a new financial stability council headed by Treasury Secretary Timothy Geithner that the task force hoped to have a set of recommended improvements ready by late January.

Barr said the goal of the task force was to hold banks accountable for fixing the problems that have been found and making sure that individuals who have been harmed are given a way to seek redress.

Bar said the investigation had found “widespread and, in our judgment, inexcusable breakdowns in basic controls. The problems must be fixed.’’

Barr delivered his comments before the Financial Stability Oversight Council. The group of top federal officials, including Geithner and Federal Reserve chairman Ben Bernanke, was holding its second meeting.

The panel was created by the Dodd-Frank legislation passed by Congress last summer in an effort to fix flaws in current government regulation that were exposed by the financial crisis that struck with force two years ago.

Barr said that the federal agencies were coordinating their investigation with state regulators. He said the federal task force hoped to report back to the stability council at its January meeting.

“Major financial institutions are being reviewed for problems across a wide range of issues in foreclosure processing,’’ Barr said.

Members of the stability council heard Barr’s presentation but made no comments during the portion of the group’s meeting that was open to the public.