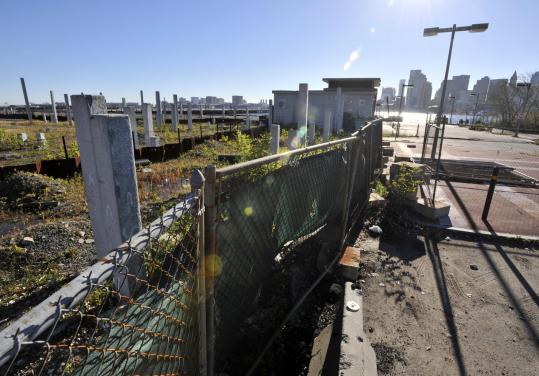 Development at the site of Portside at East Pier stopped in 2007 as the real estate market faltered. (Josh Reynolds for The Boston Globe)
By Steve Holt Globe Correspondent / November 20, 2010

Three years after abruptly stopping construction of one of the city’s largest real estate developments, developer Roseland Property Co. is dangling the hope it will finally resume work next spring, to the relief of many East Boston residents.

The 13-acre Portside at East Pier development has been a fallow slab of concrete since Roseland abruptly stopped construction in 2007, just as the real estate market was beginning to falter.

The land-side section of East Pier, a parcel of three city blocks, has large white pylons that jut skyward, including some that have settled and tilted. On rainy days, water collects into a lake-like puddle. About the only movement behind the locked fence comes from waddling ducks and geese.

Roseland now said it is in talks with two lenders about starting on a portion of the massive complex: the 176-unit apartment building on its west end. If it receives a commitment for funding by year’s end as expected, Roseland said it will break ground by late spring or early summer.

The East Pier project has been a long time coming. The land is owned by the Massachusetts Port Authority, which is leasing it to the developers. It was first proposed in 2000 and was permitted by the city in 2005.

Roseland and its development partner Lennar Corp. planned to build a $275 million, 543-unit luxury condo and apartment complex. It initially was called Portside at Pier 1. It would also have 70,000 square feet of retail space, including a day-care center, restaurant, and health club.

The developers originally planned to price the condos from $500,000 to $2 million. But when Roseland first began working on the site, it encountered problems with the existing pilings supporting the pier, requiring costly reinforcement work.

Then the real estate market began collapsing and construction of luxury condos — which made up the bulk of the East Pier complex — became particularly difficult to finance. Roseland stopped work in 2007, and the site has been quiet since.

“Ten years is a long time to be involved in anything where there are no concrete results,’’ said Bob Strelitz, a founding member of the East Boston Waterfront Development Committee, which has overseen development of the parcel since 1999.

Frustrations aside, Strelitz said Roseland has been in steady contact with the neighborhood and recently previewed plans for the apartment building, which he described as “quite attractive.’’

“Roseland is constant in their assurance that they’re trying to move forward,’’ Strelitz said.

Roseland spokeswoman Nancy Sterling said the company still intends to complete the condo and retail portions of East Pier, but she acknowledged that could take years. For now, though, the hot market for apartment properties — rents in the Boston area have held steady or even risen as home prices have fallen — has made it much easier to find financing for the rental housing component.

East Pier would be the latest development project to move forward because of demand in the apartment sector. New apartment developments are under construction in the Financial District, South Boston, and Dorchester, and additional projects are awaiting financing or pending approval from the city.

This week, Boston officials approved the Congress Group’s plans to convert the former Renaissance Charter school in Park Square to a 128-unit apartment building. Congress Group expects to begin construction in the spring.

Despite the promise of progress in East Boston, some neighbors remain anxious about the project and worry it will improve from a neglected site to a half-built one.

“Initially I was in favor of the site because I thought it would be good for the neighborhood,’’ said Mimi Goss, who owns a condo next to East Pier. “But this is not good for our property values. I think Massport and Roseland could be better neighbors.’’

Goss, who frequently works in Third World countries, said East Pier reminds her of what she sees on her travels, where builders “run out of money and it just sits there.’’

East Boston continues to suffer from the excesses of the housing boom that led to numerous condo developments and conversions throughout the neighborhood.

Some of those finished units have since been lost to foreclosure, and others have yet to get off the drawing board for lack of money. Just a stone’s throw from East Pier on the East Boston waterfront are two other stalled condo developments, Clippership Wharf and Hodge Boilerworks.

East Boston has long been a working-class neighborhood and is an entry point for many new immigrants. So in the eyes of some veterans of the East Boston market, luxury condominiums will always be a difficult business proposition.

“That’s not the market in East Boston,’’ said Tony Giacalone, who has sold real estate in East Boston since 1989. “It’s almost more of an experiment rather than a proposal.’’

But whether they are luxury condos or something more affordable, East Boston residents said it is important for the community to see these key waterfront properties finished.

“I would love to see some nice development here,’’ said Strelitz, who lives on the water, “to give people from Boston a chance to enjoy our waterfront as well as some people from East Boston who would otherwise move away.’’