This year, eating out is in 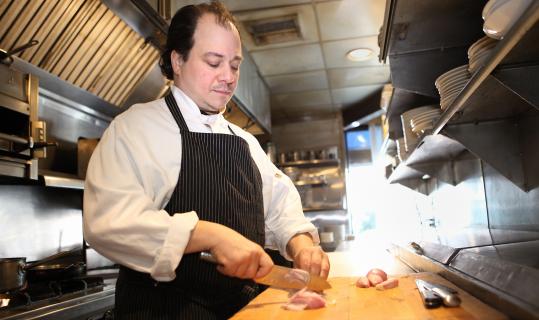 To Marc Orfaly of Pigalle, the decision to be open on Thanksgiving, once the bastion of luxury hotels or quaint inns, was an obvious one. (Wendy Maeda/ Globe Staff)
By Kathleen Pierce Globe Correspondent / November 17, 2010

For an industry that’s been battered by the economy, the bird is the word this month. Thanksgiving dinner reservations are piling up fast at Boston restaurants, with many citing dramatic increases over last year’s holiday.

Meritage at the Boston Harbor Hotel, for instance, is sold out for its lavish $85 five-course feast, and Pigalle in the Theatre District said Thanksgiving Day reservations are 30 percent higher than in 2009.

“It’s an incredible increase in one year,’’ said Daniel Bruce, executive chef at the Boston Harbor Hotel. Last year at this time, there were 35 Thanksgiving reservations on the books at Meritage. As of yesterday, the restaurant had reached its 140-seat capacity.

Recession-weary consumers are ready to splurge for the holiday season, Bruce said. “People are looking for something other than a budget dinner,’’ he said. “They are going out and spending more.’’

Across the country, 1 in 10 Americans are expected to eat out on Thanksgiving this year, according to the National Restaurant Association, a figure that has not budged since 2005. Based on anecdotal evidence, however, Boston restaurants seem positioned to do better.

“I think the quality of chefs and restaurants have improved over the decade so much. There is a big value in going out and eating a tremendous Thanksgiving Day dinner,’’ said Frank McClelland, owner of L’Espalier in the Back Bay.

His restaurant will prepare turkeys harvested from his farm in Essex as part of its $88 prix fixe feast. And though L’Espalier is one of Boston’s priciest restaurants, Thanksgiving reservations have risen by 12.5 percent annually since 2002, he said.

With the increasing demand on people’s time, the ready-made comfort of a neighborhood bistro or glamour of a high-end hotspot has helped make dining out on the fourth Thursday in November more appealing to some, said Marc Orfaly, owner and chef at Pigalle.

“When I grew up, you would never eat out at Thanksgiving. It would be an insult to the family, it meant no one could cook at home,’’ he said. “There’s no shame in it anymore.’’

To Orfaly, the decision to be open on Thanksgiving, once the bastion of luxury hotels or quaint New England Inns, was an obvious one. “Thanksgiving week is typically not very strong. If I close it’s even weaker,’’ he said. “We are going to do well.’’

Restaurants of all stripes also plan to offer their own twists on Thanksgiving traditions. For instance, Beehive in the South End is featuring turkey with a side of jazz music, and seven-month-old Mumbai Chopstix on Newbury Street is turning out turkey tandoori and kebabs. They both expect to be full.

“Neighborhood restaurants have become an extension of people’s kitchens,’’ said Chris Haynes, president of CBH Communications, a public relations firm that represents a dozen restaurants in Boston. “People have a direct connection to the chef, the bartender. It’s not this cold idea that we are going out to dinner for Thanksgiving.’’

But it’s still a lot more expensive than having dinner around the family table. According to the American Farm Bureau Federation, a family of 10 can lay out a Thanksgiving spread with all the trimmings for an average of $43.47.

Busy tables on Thanksgiving may also bode well for the crucial holiday period that culminates on New Year’s Day, restaurateurs said. Nationwide, the restaurant business was flat overall for last year’s holiday season, but the fourth quarter of 2010 is looking brighter. Customer volume has increased by 3 to 4 percent at the country’s leading 47 chains, said Harry Balzer, chief industry analyst for NPD Group, a market research firm in Port Washington, N.Y. “It’s been a year since we’ve had any numbers that were good,’’ Balzer said.

It’s crucial for restaurants to make up lost ground between Thanksgiving and the dawn of 2011. Few can afford another holiday period with stagnant numbers — brisk business at this time of year subsidizes slower months, owners say. Many area restaurants will be open on New Year’s Day, in an effort to squeeze out a few more dollars.

“Thanksgiving, Christmas Eve, and New Year’s Eve, all of these holidays catch up for the fact that we are quiet in July,’’ said Mary-Catherine Deibel, who co-owns UpStairs on the Square in Cambridge.

Deibel’s well-known Harvard Square establishment always does well on Thanksgiving. This year she expects to serve 450 turkeys, salmon, steaks, and vegan dinners over seven hours. (After the restaurant closes at 8 p.m., she’ll do it again for her staff.)

She took Thanksgiving off in the first few years following the opening of her restaurant in 1982 — which was then UpStairs at the Pudding on Holyoke Street — but eventually reversed course. In the mid-1980s, Deibel said, the only competition was “the Ritz and the Four Seasons, places that appealed to the old Yankees.’’

This year, bars and bistros in the square will be buzzing on Nov 25. “That’s the new economy. You have to stay open to stay even,’’ Deibel said.

At UpStairs on the Square, Thanksgiving has become “a bigger night than Harvard graduation,’’ Deibel said.