Seeing contributions improve the lives of others: ‘There’s no better feeling’ 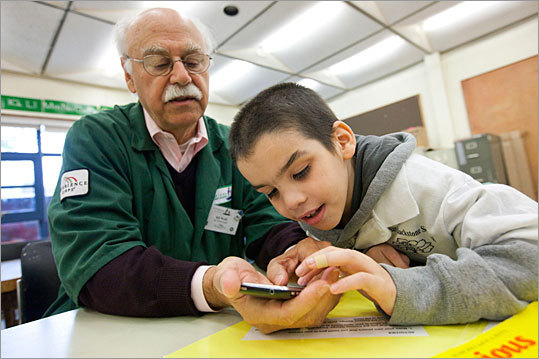 When Bill Wolff envisioned his retirement, he never imagined helping inner-city children learn to read. He figured he might take up a new hobby, or maybe a part-time job.

But in 2005, as he began to think about retiring, the former marketing executive heard of an opportunity to get involved in his own neighborhood through Experience Corps — a national group that trains retirees as reading coaches in urban schools. Five years later, Wolff, 65, spends around 30 hours per week at the Blackstone Elementary School in Boston’s South End, tutoring students as well as training and coordinating other volunteers.

“One positive person, giving positive reinforcement,’’ Wolff said. “That by itself makes a huge difference for these kids.’’

Wolff is among a legion of seniors who are using retirement to give back to their communities, finding new satisfaction by helping schools, churches, food banks, and other organizations. They are also learning that volunteering is not simply a matter of picking a worthy cause and showing up when it fits personal schedules.

Finding the right opportunity requires thought and commitment, as well as a sense of what volunteers want to get from giving, according to nonprofit executives. For example, said Kelly Stout, director of Boston’s Retired Senior Volunteer Program, or RSVP, some retirees want to continue to use skills learned over long careers; others hope to gain new skills.

“Someone who’s been a nurse for 35 years might come in and say, ‘I don’t ever want to see another thermometer,’ ’’ said Stout. “Some people are looking for something completely different.’’

For Wolff, becoming a reading coach was a chance to use communication skills honed over a 40-year career in marketing. Although the audience is vastly different, Wolff said, the same skills — listening, motivating, persuading — are used to understand and solve literacy problems of the first-, second-, and third-graders he teaches to read.

It’s not always easy. At Blackstone Elementary School, where nearly 80 percent of students speak a language other than English at home, many children are profoundly behind in reading skills. Watching them struggle, become frustrated, and sometimes slip further behind can drain emotions, Wolff said.

But earlier this fall, one of those struggling students approached Wolff and told him his tutoring had made a big difference. The extra lessons and attention, the boy said, helped him advance to the third grade. “There’s no better feeling than that,’’ said Wolff.

Wolff learned about Experience Corps and the Blackstone School after receiving a letter about volunteer opportunities from AARP, the lobby for older Americans. His transition from a working professional to retired volunteer was pretty straightforward.

But others might have to do more research or experiment to find the right match, said nonprofit executives. Retirees should take plenty of time to think about what interests them, what causes they support, and what new skills they’d like to learn in a volunteer position, said Linda Fitzgerald, AARP’s Massachusetts president, a volunteer post.

Fitzgerald said potential volunteers should consider how much time they are willing to commit. Retirees can contribute their time year-round, seasonally, or just chip in at one-day events, such as park cleanups or food drives. AARP’s “Create the Good’’ initiative (www.createthegood.org) provides listings of opportunities that require varying time commitments.

Depending on the program, prospective volunteers can expect fairly thorough screening and training processes. Wolff and other Experience Corps volunteers, for example, had to pass literacy and English proficiency tests, submit to reference and criminal background checks, and complete 20 hours of training.

And as the first of the Baby Boomers turn 65 next year, more organizations are expected to mine the growing population of retirees. Those seniors who volunteer are likely to benefit, too.

Studies by Washington University in St. Louis, for example, have found that volunteers gain improved physical and emotional health, expanded social networks, and increased self-esteem. That can all add up to longer lives.

Wolff, known simply as “Mr. Bill’’ to students at Blackstone Elementary, often puts in long days helping the children, but said he’s having too much fun to think about stopping any time soon. The work is not just a reason to get up in the morning, he said, but an opportunity to make an impact. He’s fortunate, he added, to have the resources — financial, physical, and spiritual — to be able to contribute.

“This is not your grandfather’s retirement, where you sit on your porch, putter around in the garden, or play golf,’’ Wolff said. “We’re young at heart. We’re healthy. We have plenty to give back.’’