A mantra for many: Stop putting off life’s goals 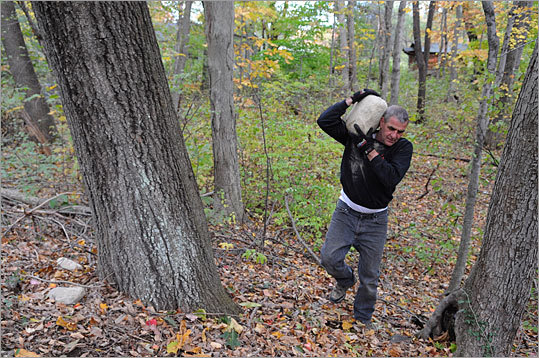 David Zoffoli, 56, gathers rocks for a wall he is planning to build at his Haverhill home. A heart attack nine years ago spurred Zoffoli to reorder his life’s priorities. (Lisa Poole Photo for The Boston Globe)
By Nancye Tuttle Globe Correspondent / October 31, 2010

At 47, David Zoffoli suffered a massive heart attack that left him clinically dead for six minutes. When he recovered, he knew he had no time to waste. He needed to learn to sew shirts, reunite with the family he lost after his adoption as an infant, and help his hometown establish an art center.

That was the beginning of Zoffoli’s so-called bucket list, a tally of goals to achieve and experiences to enjoy before the inevitable happens. Over the past nine years, Zoffoli, 56, of Haverhill has stitched more that 50 shirts, met the four brothers and sisters he didn’t know, and reached out to Haverhill officials about creating an arts center.

He’s also added new challenges, such as building a stonewall from hundreds of rocks excavated from his property and traveling to Norway to see the Northern Lights.

“Before my brush with death, I was a Type-A personality, focused on career, socking money away, and making a million dollars,’’ said Zoffoli, a freelance theater director and artist in residence at Fitchburg State University. “Now I have more goals about becoming a better person and giving back.’’

Since the 2007 film “The Bucket List’’ popularized the idea of attaining lifelong goals before “kicking the bucket,’’ aging Americans have been drafting lists of dreams-deferred, places-still-to-see, and activities-yet-to-try. Websites, such as 43Things.com, eHow.com, and Lifehack.org, offer planning tips, suggestions, and encouragement for people to do what they’ve always wanted to do.

As Zoffoli shows, a bucket list isn’t necessarily about daredevil stunts, such as skydiving, or expensive trips to faraway places, such as Antarctica. It can include goals as simple as spending more time with family, learning to play an instrument, or completing a long-neglected home project.

For example, the bucket list of Jeanne Bracken, a 64-year-old retired librarian from Littleton, includes reading more. singing in a chorus, and learning to play the hammered dulcimer.

Bracken’s dream of playing the hammered dulcimer began 35 years ago, when she heard the instrument’s cascading string melodies emanating from shop in a Colorado arts colony. Now, she’s found a workshop in West Virginia that teaches how to build and play hammered dulcimers.

“Nothing on my list is expensive,’’ Bracken said. “I never thought I needed $1 million to retire.’’

The size and shape of a bucket list depends on age, personality, lifestyle, and resources, according to life coaches. Most lists are fluid, with new goals added as old ones are achieved.

Jan Stewart, a Littleton life and career coach, suggests several steps to create a bucket list. First, visualize goals and write them down. Next, create what Stewart calls a “vision board’’ to put up snapshots of your dreams. For example, if your dream is to live by the ocean, post a picture of a house on the water to help stay focused on that goal.

Finally, share goals with your partner, friend, or coach. “It’s important to talk about it and believe it can happen,’’ said Stewart. “If you believe it, you can achieve it.’’

For more ambitious goals, such as traveling to far-flung places, money can be an object. So, along with a bucket list, create a savings plan to finance it.

A trip to Egypt to experience the pyramids, Sphinx, and a culture that is thousands of years old ranked high on the bucket list of Ilene Richard, 55, of Andover, and her husband, Larry, 57. Estimating that the trip would cost between $5,000 and $10,000, they regularly set aside money over the past few years.

Meanwhile, they scouted tours until they found one offering airfare, accommodations, some meals, and a guide for $2,500 per person. “Too good to pass up,’’ said Ilene Richard.

In March, the Richards landed in Cairo. They could see the Great Pyramids and Sphinx from their hotel in Giza. They cruised the Nile for three days. They marveled at the paintings in the Tomb of Ramses, with colors so brilliant that they seemed to have been applied just days before.

“Incredible blues, vibrant reds, and pure yellow — amazing,’’ said Ilene Richard. “It was an incredible adventure, more exciting than seeing it in a book, and well worth the cost and effort.’’

For Zoffoli, the theater director, his bucket list efforts are directed closer to home these days. He’s lugging stones across his property in Haverhill’s Bradford section and slowly but surely erecting his wall. He’s serving as chairman of the city’s arts council. He’s planning a reunion with all four of his brothers and sisters.

“It’s about putting what you want to do first,’’ Zoffoli said. “I’ve stopped procrastinating. I’m living my bucket list every day and enjoying every minute.’’