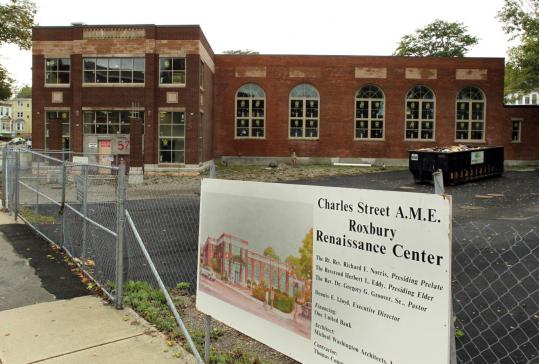 In better economic times, they seemed like the perfect partners.

One of Boston’s oldest and most renowned black congregations, Charles Street African Methodist Episcopal Church, needed about $4 million to realize a dream, and one of the country’s premier black-owned banks, OneUnited, was eager to help.

The Roxbury Renaissance Center, years in the planning by the church’s congregation, would be a gleaming monument in a humble neighborhood: a community gathering site with a grand ballroom to host weddings and conferences, along with offices for small businesses and practice studios for musicians.

The church couldn’t afford the $800,000 down payment on the construction loan, according to legal documents, but the bank relaxed the rules as a good-will gesture to attract customers to a new branch in the neighborhood.

But four years and a financial crisis later, the deal has not turned out the way anyone planned.

Construction halted nearly a year ago, when the church failed to repay the loan as agreed — just as financial and regulatory problems mounted for OneUnited. In September, the bank sued the church for payment and has threatened foreclosure on the center if no resolution is reached.

The church is fighting back. In a Suffolk Superior Court filing, it is charging that OneUnited made the loan “without adhering to prudent lending standards — for the ultimate purpose of gaining publicity and notoriety, and expanding its business in the church’s neighborhood.’’

Robert Cooper, OneUnited’s chief counsel, said the countercharges are without merit, adding that the public fight is unfortunate. “It would have been more productive had [the church’s] advisers supported their development efforts rather than engaging in a transparent smear campaign, the result of which may only diminish both institutions,’’ he said.

Today a chain-link fence surrounds the Roxbury Renaissance Center at 575 Warren St., and red signs on its padlocked entrance warn that attack dogs guard the property at night. The building was supposed to be finished two years ago, but now sits vacant, 85 percent complete, according to church officials. Hardwood floors and kitchen fixtures still need to be installed, and the walls remained unpainted.

Church representatives say OneUnited’s chief executive, Kevin Cohee, approached them about the loan in 2006. The church had been a longtime client of the bank and its predecessor institutions, and Cohee offered to help get the project going.

When church and bank officials signed the $3.7 million loan agreement, the church was to pay it off in June 2008, according to the legal filings. But construction didn’t get fully underway until late 2007, putting the project behind schedule by nine months. With the delay, and the withering economy, the church asked for — and received — several extensions on the loan. But last December, OneUnited Bank stopped paying the builder and construction stopped.

The loan turned sour at an especially bad time. OneUnited, by now, had serious problems of its own. The bank was operating with a $12 million federal bailout, after losing $50 million when mortgage agencies Fannie Mae and Freddie Mac failed.

Ever since receiving the federal funds in late 2008, OneUnited has been under the spotlight, from regulators questioning its lending practices and executive compensation, and for the way it sought political help for the bailout. The bank secured a special meeting with Treasury officials through US Representative Maxine Waters, a California Democrat who, along with her husband, had investments in the bank; Waters is now facing a House ethics trial in the matter. In the end, US Representative Barney Frank, the Massachusetts Democrat who chairs the House Financial Services Committee, helped craft the bailout law so OneUnited and other small banks could get aid.

OneUnited has also been criticized for failing to lend in underserved communities in the Boston, Los Angeles, and Miami markets where its branches are, preferring instead to lend to wealthy developers and business people. The loan to Charles Street AME — a 1,200-member church that was once a stop on the Underground Railroad — is the kind of business the bank has held up to burnish its reputation. Suing the famous church was not where the bank wanted to go, according to people briefed on the matter.

But over the summer, tensions rose after the head of the church, the Rev. Gregory G. Groover Sr., tried to break the impasse with what he thought was a fair proposal. In a June letter, Groover asked that the church be given until the end of the year to repay the loan, while continuing to pay 7 percent interest though not the principal on the loan. He praised the bank for supporting the project and the community, writing, “Had it not been for OneUnited Bank stepping up to the plate when other lenders wouldn’t even consider us, we would never have been able to undertake the construction,’’ according to a copy of the letter reviewed by the Globe.

OneUnited executives, however, were frustrated, according to people briefed on the matter, and felt the church was falling down on its obligations. During an August conference call, church advisers boldly suggested that the bank forgive a large portion of the loan, essentially selling it to another entity at a discount, according to several people briefed on the discussion.

Instead, OneUnited’s lawyers again insisted that the church repay the loan in full. When that didn’t happen, the bank sued.

Perhaps the church should have seen a battle coming. Groover is no stranger to contentious fights and big budgets, as chairman of the Boston School Committee, where he helps oversee an $800 million public school system. But in his view, the congregation had already contributed about $2 million to the Renaissance Center, dating to acquiring the property. And the bank knew the building was behind schedule; if only the church could finish the project, it could rent out space and generate revenue to pay off the loan.

“My hope is that we will be able to resolve the difficulties with the bank and that we could do it outside the courtroom, that we could sit down and negotiate a settlement,’’ Groover said in an interview. “It really doesn’t make sense at this point that we would have to stop the project. We need to finish it.’’

Cooper said the bank wants to resolve the dispute as well: “We’re strong supporters of the very important work Charles Street AME performs in our community.’’

But the tone of the legal fight has made a resolution harder. The church, in its response to the lawsuit, essentially accuses the bank of making a risky loan. It discloses that when it didn’t have the down payment for the project, OneUnited suggested that the church instead put $850,000 in a deposit account at the bank’s new Grove Hall branch. The deposit would help fuel the new branch, but these were charitable endowment funds that could not be touched, the church said, and therefore could not serve as true collateral.

In the document, the church said the bank “pushed a construction loan package onto Charles Street AME that OneUnited knew could not be repaid according to its stated terms, and for which actual construction could never meet the schedule contemplated by the loan package.’’

Officials from Charles Street AME’s regional office, the First Episcopal District of the AME Church, which cosigned the loan, declined to comment. Meanwhile, observers who have been informed of the situation hope the two sides will resolve their differences.

Darnell L. Williams, chief executive of the Urban League of Eastern Massachusetts, said, “The church is in the position to do, I think, a great community service by having this Renaissance Center materialize and come to completion.’’

He said the center will spur economic development in the neighborhood and be a “shining example’’ of the sort of community lending OneUnited has said it is committed to. Without weighing in on the specifics of the loan, Williams said, “I think the bank should exhaust all of its avenues in working with a longstanding community partner.’’