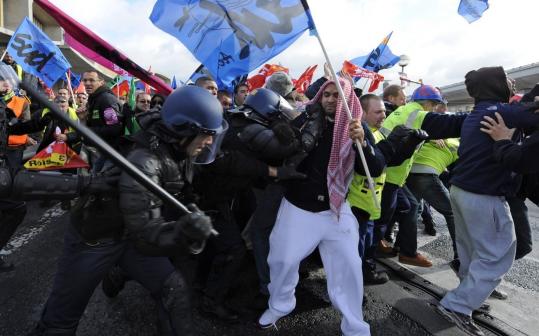 Outside the capital, hooded youths smashed store windows amid clouds of tear gas. Riot officers in Nanterre and Lyon sprayed tear gas but appeared unable to stop the violence.

Police forced striking workers away from blocked fuel depots in western France, however, restoring gasoline to areas where pumps were dry after weeks of protests.

The government has proposed raising the minimum retirement age to 62, from 60.

“I’m calling on people to be responsible, in particular those who are having a roaring time blocking access and breaking things,’’ she said. “It’s serious for our country.’’

After months of largely peaceful disruptions, some protests erupted into scattered violence this week. President Nicolas Sarkozy vowed that his conservative party would prevail in a Senate vote expected Thursday.

Many workers say the change would erode France’s social benefits — which include long vacations, contracts that make it hard for employers to lay off workers, and a state-subsidized health care system — in favor of “American-style capitalism.’’

Despite France’s tolerance for a long tradition of strikes and protest, official patience appeared to be waning after weeks of snarled traffic, canceled flights, dwindling gasoline supplies, and urban violence.

Protesters temporarily blocked the main road to one of two terminals at Paris-Orly Airport yesterday and some passengers walked hundreds of yards to get there. In one terminal, screens showed that 10 of 52 flights were canceled.

At Charles de Gaulle Airport, the nation’s biggest, protesters sang the national anthem before pushing through a barricade.

One in three TGV high-speed trains were canceled.

With nearly a third of France’s gas stations dry, authorities stepped in overnight to force open three fuel depots blocked by striking workers for days, Interior Minister Brice Hortefeux said. He warned the blockades threatened emergency services and could have grave consequences for the economy.

Over the past week, 1,423 people have been detained for protest-related violence and 62 police officers injured, he said.