THIS STORY HAS BEEN FORMATTED FOR EASY PRINTING
Earnings roundup 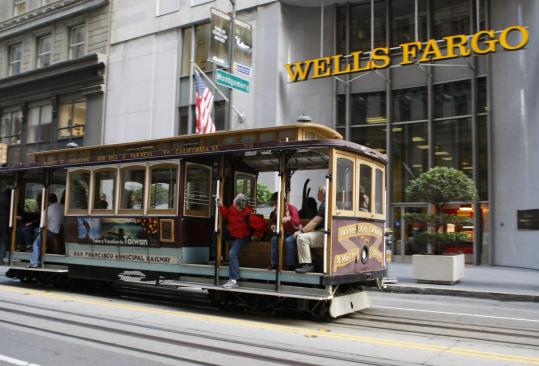 Wells Fargo said fewer customers defaulted on loans. Losses from bad loans were $4.1 billion in the third quarter, down 20 percent from the third quarter of 2009. (Paul Sakuma/Associated Press)
October 21, 2010

The online marketplace operator also predicted results for the current quarter that were better than analysts had been expecting, sending its shares up more than 7 percent in after-hours trading.

Morgan Stanley says it needs more time to reshape its battered franchise. But its latest results suggest the firm is falling further behind its rivals.

The firm reported a net loss of $91 million in the third quarter because of the disposal of an investment in Atlantic City and the changing value of its own debt. And its profit from continuing operations fell well short of analyst estimates and rivals’ results.

Most of the country’s major banks struggled during the third quarter, as the stock and debt markets proved fragile.

But Morgan Stanley, which is rebuilding its trading division, struggled more than others. Its trading revenue fell 58 percent, to $1.44 billion, in the quarter from a year ago.

Morgan Stanley took a $229 million loss through its disposal of a stake in Revel Entertainment, which is developing a $2 billion hotel and casino in Atlantic City. Excluding the special charges, Morgan Stanley reported earnings from continuing operations of $313 million, or 5 cents, a share, for the quarter.

Netflix raised its year-end subscriber forecast to as much as 19.7 million from up to 18.5 million previously. Sales this quarter will be $586 million to $598 million. The company projects net income of $32 million to $40 million, and earnings of 59 cents to 74 cents a share, unchanged from prior forecasts.

Wells Fargo & Co. reported a 19 percent increase in its third-quarter income as losses from bad loans declined, a hopeful sign that American businesses and consumers are becoming more financially stable.

Fewer of Wells Fargo’s customers defaulted on loans, and fewer were late in payments on their mortgage and credit cards. It was a common theme with other large US banks that have reported results so far this quarter.

However, Wells Fargo is still setting aside large amounts of funds to cover future losses from loans, although less than a year ago. It set aside $3.45 billion for such losses in the third quarter, down from $6.11 billion last year.

In another positive sign, Wells said it saw a 17 percent increase in new loans to businesses and consumers as mortgage applications reached the second-highest level in the bank’s history.

On a less encouraging note, the total amount of loans on Wells Fargo’s books fell to $753.7 billion at the end of September from $766.3 billion in the previous quarter.

That means overall demand for borrowing hasn’t picked up yet.

Wells posted revenues of $20.87 billion, compared with $22.47 billion in the third quarter of last year.