Customers are cautious, retailers wary but sales forecast is up 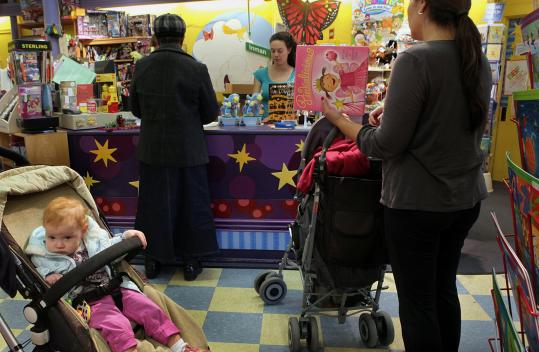 Ron Franklin did some window shopping in Boston’s Downtown Crossing this week, but was “very cautious’’ about every purchase.

“I have five kids, so I had to scale back,’’ said Franklin, a painter who lives in the South End.

It’s that kind of attitude that worries area retailers as the crucial holiday shopping season nears, even as they predict some growth in sales over last year. Consumers, still smarting from the recession, remain reluctant to spend.

The National Retail Federation said it expects sales for November and December to increase 2.3 percent to $447.1 billion, compared with the same period last year. That’s slightly lower than average, but an improvement from last year, when sales were nearly flat, and much better than the 3.9 percent drop in 2008 caused by the financial crisis.

For retailers everywhere, the entire year hinges on the next two months. In Massachusetts, holiday sales account for about 25 percent of annual business for the average store, according to Jon Hurst, president of the Retailers Association of Massachusetts.

“We still have a way to go to get back to 2007,’’ Hurst acknowledged, but he noted that Massachusetts has been recovering from the recession at a faster pace than the country as a whole, and he expects business to be up modestly when final sales figures are tabulated in January.

That kind of tempered optimism is being voiced elsewhere as well.

“Consumers are still nervous, still concerned about their own personal situation, and probably will spend the same or less than they did last year,’’ said Madison Riley, managing director with retail consulting firm Kurt Salmon Associates. “It just bodes for a really relatively modest seasonal period.’’

Retailers, from giants such as Wal-Mart Stores Inc. and Macy’s Inc. to independent local shops like Stellabella Toys, say the challenge this year will be the same as last year: to entice bargain-hunting shoppers while also keeping a tight rein on inventory and staffing levels.

“I expect to see a positive sales result in this fourth quarter,’’ Wal-Mart chief executive Mike Duke told analysts this week at the company’s annual analysts meeting in Bentonville, Ark.

Sherry Lang, a spokeswoman for retail discounter TJX Cos., which is based in Framingham, said she also is anticipating a “good holiday season.’’ Customer traffic has continued to rise over the last year, she explained, and store officials plan to add seasonal staff at around the same levels as last year.

“We seem to be attracting new customers,’’ she said. “The challenge is always execution. . . . We need to stay sharp and do our jobs.’’

For many retailers, that means recognizing that the way people shop has changed, said Mike Tesler, a partner with the Norwell consulting firm Retail Concepts. “The fun is out of shopping,’’ Tesler said, adding that consumers have less time and are increasingly buying only to fill needs. “People aren’t just going to the mall to look around and hang out with friends like they used to.’’

Successful retailers, Tesler said, are the ones that have cultivated loyalty for their brands and that make shoppers feel good about what they buy. They have also learned to keep their overhead low.

“What retailers have learned from the difficulties [of the last two years] is the need to be meaner, leaner, and also, to get more out of the help that they already have,’’ Tesler said. According to the recruiting firm Challenger, Gray & Christmas Inc., up to 600,000 seasonal workers will be hired nationwide this October, November, and December — a nearly 20 percent jump from last year, but still not as high as prerecession levels.

Macy’s plans to hire about 65,000 temporary workers, a slight increase over last year, said Jim Sluzewski, senior vice president. He said the department store chain expects sales to rise in the second half of the year — especially coming off of a good back-to-school shopping period. Same store sales at Macy’s were up 4.8 percent in September.

“The bottom line is that we’re very optimistic for the holiday season,’’ he said.

Mark Whiting, general manager of the Northshore Mall in Peabody, said he expects his mall’s stores to have a “very robust shopping season,’’ and hopes that sales will rise as much as 4 percent or more.

“We had a very, very successful back-to-school [season] here,’’ Whiting said. “I traditionally use that as a barometer of how we’ll trend during the holiday season.’’

At Stellabella Toys, which has four locations in Greater Boston, owner Rick Henry was more cautious. He expects his store’s holiday sales to remain flat or pick up slightly over last year.