THIS STORY HAS BEEN FORMATTED FOR EASY PRINTING
Special Report: Massachusetts CEO Pay

Chief executive works without salary — but not for free 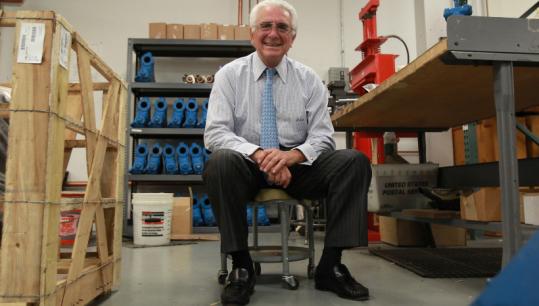 John Hatsopoulos makes less money now than he did when he was pumping gas at a Texaco station when he was a freshman in college. (Suzanne Kreiter/Globe Staff)
By Katie Johnston Chase Globe Staff / October 3, 2010

As the top executive at two energy companies, John Hatsopoulos makes less money than he did when he was pumping gas at a Texaco station as a college freshman. The 76-year-old brings home just $2 a year, in fact — one from each of the Waltham-based enterprises he runs.

After retiring a decade ago with a healthy nest egg from a firm he cofounded in the 1950s, Hatsopoulos said it made more sense to put his new salaries back into Tecogen Inc., the private combined heat and power products company, and the publicly traded on-site utility firm American DG Energy Inc., instead of into his pocket.

“It’s very difficult for small companies to raise capital nowadays,’’ he said. “And my goal was to make a big success of both Tecogen and American DG, not to get a few hundred thousand dollars a year.’’

Hatsopoulos is an anomaly among his peers — one of only two CEOs running 209 of the state’s publicly traded companies who weren’t paid a salary last year. Collectively, these companies paid their chief executives a total of $557 million in 2009, with more than two-thirds of those CEOs receiving a bonus, even though many of their companies lost money last year, according to a Boston Globe analysis of pay data compiled in conjunction with Capital IQ, a financial research firm owned by Standard & Poor’s. (The other local chief executive who was paid nothing last year, Michael Perik of Framingham-based The Princeton Review, declined to be interviewed for this article.)

Hatsopoulos, 83, came to Boston from Greece at the age of 18, following in the footsteps of his older brother, George, who was getting his doctorate at MIT. Hatsopoulos was studying history and mathematics at Northeastern University, and doing calculations for his brother at MIT as part of a co-op job, when they teamed up to start the energy efficiency company Thermo Electron in 1956. That company, based on George’s doctoral thesis, is now the multibillion-dollar analytical instruments corporation Thermo Fisher Scientific Inc., whose chief executive, Marc N. Casper, last year was the highest paid CEO in Massachusetts with a $34.3 million salary.

Hatsopoulos retired as president and chief financial officer from Thermo at the end of 1998, planning to spend his time playing tennis and bridge and tending to the mangos, papayas, and bananas in his Lincoln greenhouse. Instead he jumped back into the executive suite, together with his brother buying Tecogen in 2000 and founding American DG Energy a year later.

The two companies go hand in hand: American DG Energy uses a Tecogen device — reclaiming the heat wasted when electricity is created and using it to make hot water — to supply power to customers that need a lot of hot water, such as hospitals and hotels.

Hatsopoulos is quick to point out that not accepting a big salary isn’t simply a benevolent gesture. Instead of American DG Energy paying him close to half a million dollars a year, he said the company can use the money to install five more energy-producing units, which means more revenue for the company — and more money in his wallet.

“I’m not an angel,’’ said Hatsopoulos, a gregarious man with white wavy hair and black eyebrows who wore a checked shirt with pinstriped pants and a diagonal-striped tie. “I’ll make it up at the end because my stock will be much higher.’’

Hatsopoulos, who has never been paid a salary as the CEO of the two companies, decided on taking $1 a year for each company after his accountant told him that if he reported zero income, the appreciation of his company stock — he and his brother each own 24 percent of the shares — could be considered earnings and therefore be taxed. (The company said Hatsopoulos did not receive a salary in SEC filings.) Hatsopoulos’s brother, George, who serves as chairman of the board at American DG and chief scientist and board member for Tecogen, doesn’t get paid for his contributions, either.

It’s rare for CEOs to work without pay, said David Wise, a principal at the management consulting firm Hay Group, but those who do are often in Hatsopoulos’s situation, founders with substantial stock in the company who benefit from share price increases. Others tend to be rich executives who “get fulfillment from being the hero that rescues a company from the brink,’’ he said.

Hatsopoulos expects his companies to grow, but he has no plans to start collecting a salary and thinks other executives should do the same if they can. “It’s for the best interest of themselves and also the shareholders,’’ he said. “Everybody gains.’’

Todd Wallack of the Globe staff contributed to this report. Katie Johnston Chase can be reached at johnstonchase@globe.com.