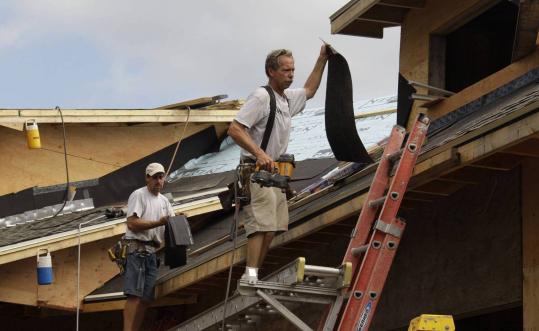 Most economists say construction has to be at least double current levels for the market to be considered healthy — 1.2 million to 1.5 million units a year. Home-building activity is “astoundingly weak,’’ says economist Paul Dales. (David Duprey/Associated Press/File 2010)
By Alan Zibel Associated Press / September 22, 2010

WASHINGTON — The home-building industry is years away from recovering from the excesses of the housing boom.

Even with a modest rise in construction last month, the pace of building would need to at least double to signal a healthy market and contribute to job growth, most economists say. They don’t see that happening until the middle of the decade.

Builders are competing with millions of foreclosures and other distressed properties. They are unlikely to ramp up construction until those are cleared away and demand for new homes picks up.

Home construction rose 10.5 percent in August, to a seasonally adjusted annual rate of 598,000, the Commerce Department said yesterday. The results, however, were boosted by a 32 percent jump in apartment and condominium construction, a volatile part of the market.

Construction of single-family homes, which represented about 73 percent of the market in August, grew only about 4 percent from a month earlier. While overall housing starts are up 25 percent from their bottom in April 2009, they are still 74 percent below their peak in January 2006.

Most economists agree that construction has to be at least double current levels for the market to be considered healthy — between 1.2 million and 1.5 million units each year. Dales doesn’t see that happening for at least three to four years.

A massive building boom saw 2 million homes per year constructed from 2004 through 2006. Many were sold to speculators. They then resold the homes, often to borrowers who took out risky loans and then defaulted.

“We’re not going to get back to that kind of unsupportable level of demand,’’ said Brad Hunter, chief economist with Metrostudy, a real estate consulting firm. He forecasts the industry will break ground on 670,000 homes this year.

He doesn’t expect the industry to hit the rate of 1 million per year until 2012, and that’s only if the economy does not slide back into a recession.

On Monday, the National Association of Home Builders said its monthly index of builders’ sentiment was unchanged in September at 13. The index has now been at the lowest level since March 2009 for two straight months.