City looks to restaurants to draw back the crowds 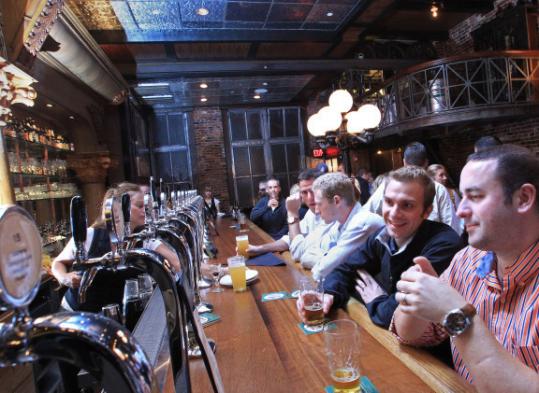 Chef Jacky Robert strolled through the kitchen at his new Downtown Crossing restaurant, pointing out the classic French dishes that have drawn diners to his family’s establishments for decades: the tender duck legs for confit, placed in a tray for crisping; the golden potatoes for a signature side dish; the glazed apples crowning the tarte tatin.

The restaurant Petit Robert Central may be new, but for Robert, the neighborhood is not. A few blocks away, customers once savored the fare at his uncle Lucien’s Maison Robert, a cornerstone of the former shopping mecca that some saw as the hub of the Hub.

Now destination dining is enjoying a revival in Downtown Crossing, which city officials and business owners believe is helping to bring back the struggling district — just as pioneering restaurateurs brought life to the South Boston Seaport District, when the economy stalled development of office space, condos, and shops.

About a dozen upscale restaurants and pubs, from BiNA Osteria to Stoddard’s Fine Food & Ale, have opened recently or will debut in Downtown Crossing in the coming months, in what city officials say is the largest wave of new restaurants there in years. These sit-down establishments represent a shift from the fast food outlets that dot the neighborhood now, and present a striking contrast to the scattered empty storefronts and the gaping construction hole left by the shuttered flagship Filene’s Basement.

“Restaurants, to some extent, can be a destination until the neighborhood develops. People will take a chance to come and find you,’’ said Babak Bina, co-owner of Washington Street’s BiNA Osteria, and a board member at the business association Downtown Crossing Partnership. “They bring attention to the neighborhood. They get people comfortable.’’

Several restaurateurs said they were motivated to expand in Downtown Crossing not only because of city investment in the area — nearly $500,000 since 2006 for restaurant loans, permits, and signage — but also because of Mayor Thomas M. Menino’s personal commitment to turning around Downtown Crossing. Including the new arrivals, the area now has nearly three dozen sit-down restaurants, most notably the venerable Locke-Ober.

Chris Damian, co-owner of the restaurants Scollay Square and Tavern on the Water, said he decided to open Max & Dylans on West Street two years ago, after he noticed Downtown Crossing was being cleaned up.

After “a little bit of marketing, a little bit of working with the people in the neighborhood,’’ he said, business is good, especially with the Boston Ballet now at the nearby Boston Opera House. And with the Broadway musical Wicked now playing there, “we’re slammed,’’ he said.

Location is also a big selling point: the Downtown Crossing T stop is the nexus of the Red, Orange, and Silver subway lines and connects to the Park Street Green Line hub, bringing some 100,000 people to the area daily. An estimated 160,000 people also work in the area, and about 8,000 residents call the place home.

Bradley Fredericks, who has owned Fajitas & ‘Ritas on West Street for 21 years, is bullish enough to open another restaurant next year in Downtown Crossing: the Back Deck, which will serve burgers, steaks, and seafood grilled over charcoal in an open kitchen. “The lease has been signed, we have been awarded the liquor license. Right now, it’s in the architect’s and designer’s hands,’’ he said. “I am very comfortable and familiar with the neighborhood.’’

Restaurants have become the secret ingredient to stimulating places such as the Seaport District, an area, like Downtown Crossing, that has seen the recession stall ambitious development plans.

But then came risk-takers like chef Barbara Lynch, who opened three restaurants there in three years: Drink, Sportello, and the latest one, the luxe Menton, in the spring. The area now boasts about 25 restaurants, with five more on the way.

“It’s exciting to be part of a transformation and an emerging neighborhood,’’ Lynch wrote in an e-mail. “Great restaurants become a destination unto themselves . . . and help establish the ‘personality’ of the locale.’’

Roger Berkowitz, chief executive of Legal Sea Foods, opened Legal Test Kitchen in the Seaport District in 2006 and is scheduled to unveil a flagship Legal Sea Foods on the waterfront this winter. He says expanding in the Seaport has been a gamble that has paid off. While he has looked at spaces in Downtown Crossing, he’s not yet willing to make the same bet on that area.

“One of the disappointments about that area is that it hasn’t accelerated as fast as people had hoped,’’ Berkowitz said. “I suppose it’s easy enough to point the finger at the failed project: the Filene’s Basement site. That was supposed to be the catalyst.’’

The famous bargain basement store closed in 2007 for renovations but has yet to reopen because the building’s developer couldn’t get loans after the financial crisis. In Downtown Crossing’s heyday, in the 1950s and 1960s, shoppers flocked to Filene’s to hunt for deals or browse fashions at Jordan Marsh.

Menino remembers shopping there with his parents as a child, getting blueberry muffins at Jordan’s or checking out the Louisville Sluggers on display at Raymond’s, a department store. The mayor brought his kids there, too, he recalled. And it’s partly that nostalgia that is pushing him to make Downtown Crossing a hub once more.

“We haven’t seen the best of Downtown Crossing,’’ said Menino, “but it’s in the works.’’

It could take years to bring that activity back, said Enrique Silva, assistant professor of city planning and urban affairs at Boston University. He said the empty hole that once was Filene’s Basement reminds some of the blight of the 1970s, when Downtown Crossing abutted the adult entertainment district known as the Combat Zone. “It has, unfortunately, a bad reputation it has to shake off,’’ Silva said.

It can still be tough to make it in Downtown Crossing. Petit Robert Central is moving into the space at 101 Arch St. most recently occupied by Vinalia, and before that Dakota’s — both restaurants that didn’t make it. And Ivy, which serves up Italian, recently filed for Chapter 11 bankruptcy. Downtown Crossing resident Bill Ward, who moved two years ago from the Back Bay, said it would “take a lot more than restaurants’’ to make the neighborhood a destination, but places like the upscale pub Stoddard’s are a good start.

Robert, meanwhile, likes that he already knows the neighborhood that Petit Robert Central will call home.

As he flew around the kitchen last week, Robert said being in Downtown Crossing brings back memories of his hours after work at Maison Robert in the 1970s, when he and Lydia Shire, a salad preparer who later became one of the city’s leading chefs, would explore the area’s clubs. He would like to help remake the district.

“If my uncle had not opened Maison Robert, I probably would not be a chef right now,’’ said Robert. “That’s the reason why I wanted to come back downtown — because that’s where everything started for me.’’

© Copyright 2010 Globe Newspaper Company.
Graphic
Your comment is subject to the rules of our Posting Policy
This comment may appear on your public profile. Public Profile FAQ