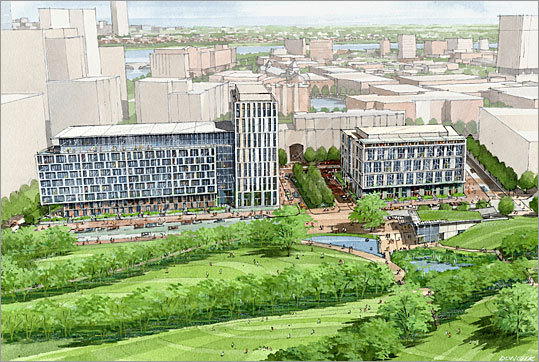 (Spaulding & Slye Colliers) Artists' rendering of the development from 2004.
By Jenifer B. McKim Globe Staff / September 9, 2010

The Los Angeles financial group Canyon-Johnson Urban Funds plans to work with HYM Investment Group of Boston and Atlas Capital Group in New York to develop the 44-acre tract, a former Pan Am rail yard a few blocks from Kendall Square in Cambridge. Small pieces of the property also reach into Boston and Somerville.

Canyon-Johnson Urban Funds is a joint venture between Canyon Capital Realty Advisors and a subsidiary of Magic Johnson Enterprises that was created in 2001 to redevelop real estate in “densely populated, ethnically diverse urban communities.’’

Thomas N. O’Brien, managing director of HYM Investment Group — which will manage the day-to-day operations of the project — said the companies plan to build up to 5 million square feet of retail, commercial, and residential space at the site. The construction will center around a 10-acre park, which has already been built.

“We are feeling very confident we will produce a project that everybody will be proud of,’’ O’Brien said. “This site can be a source of new construction jobs. It is a great site for the future of Massachusetts.’’

NorthPoint was originally launched in 2000 by a joint venture between Boston and Maine Corp. and Cambridge NorthPoint LLC. In 2005, the companies became embroiled in a court fight over the pace of development, financial issues, and a potential sale of the property. Only two condominium buildings, with a combined 330 units, have been constructed, along with the park and some roads, according to O’Brien.

O’Brien, a former Boston Redevelopment Authority director, said the original partnership formally broke up two weeks ago when Boston and Maine made a deal with the new investment firms to complete the project. O’Brien declined to provide financial details about the agreement.

He said the new group will cooperate with the state, which is planning to build an MBTA station on the property, part of a Green Line extension to Tufts University in Medford. But the developers do not plan to invest money in the T stop, he said.

City officials from Boston, Cambridge, and Somerville could not be reached for comment last evening.

State Representative Timothy J. Toomey Jr., a Cambridge Democrat, said he was pleased to hear the project is moving forward, but said he needs to know more about the plans. Toomey said he is especially concerned about the cost of building the MBTA station. The original developers had pledged to pay $70 million to build the subway stop and the new partners “should be held to the same commitments,’’ he said.

David Begelfer, chief of the Massachusetts branch of the commercial real estate development association NAIOP, said development of NorthPoint is crucial to the area’s economy.

“This property is a real gem, and I would safely say that this is a location that will probably lead the way out of the recession,’’ Begelfer said.

A look at the development site and past artists' renderings.
Your comment is subject to the rules of our Posting Policy
This comment may appear on your public profile. Public Profile FAQ