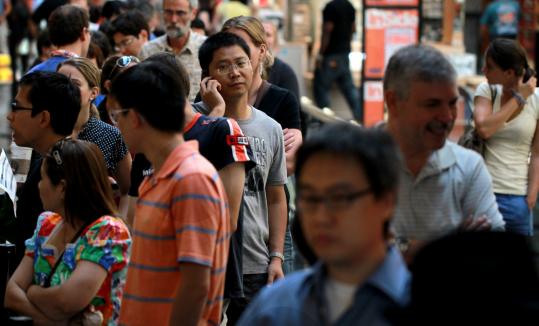 By the time retailers closed their doors Sunday, many were proclaiming the state’s sales tax holiday a success, with stories of busy cash registers and filled parking lots — but there were few numbers.

Businesses were jubilant about the boost in business, and the Retailers Association of Massachusetts said sales statewide appear to have exceeded the expectations of $500 million over the weekend.

The state Department of Revenue, which had estimated a loss of $20 million to $23 million in tax revenue for the two days, said the actual figures will not be available until October.

Some businesses, such as Yale Appliance and Lighting in Boston, have already tallied how much money they took in Saturday and Sunday, when the 6.25 percent tax on most products priced under $2,500 was waived. There were about 1,800 transactions at Yale Appliance, compared with about 150 on a typical summer weekend, said owner Steven Sheinkopf, accounting for about $5 million in sales.

That was double the store’s revenue from last August, when there was no tax holiday, he said. The temporary tax cut was enough to convince people to buy appliances they may have been considering for some time, Sheinkopf said.

“People have a tendency during a recession to keep their money very close without a reason to buy,’’ he said.

“There was just constant traffic going through the store,’’ he said. “And people were buying, which was nice.’’

More than 50,000 people visited CambridgeSide Galleria during the weekend, said Issie Shait, the mall’s general manager. That was a 36 percent increase from the same weekend last year.

But with unemployment high and consumer confidence low, economists and other specialists said a two-day tax reprieve will not do much to turn the retail economy around.

“I’ve never been convinced that this is a great stimulus,’’ said state Representative Jay Kaufman, a Lexington Democrat who is House chairman of the Joint Committee on Revenue. “The larger stores can afford the advertisements that the small stores can’t, so one has to wonder whether consumers are being driven to those in the same numbers as they are to the larger chains.’’

Even Bill Rennie, vice president of the Retailers Association of Massachusetts, said that while he believes the benefits of the weekend sales will trickle down — for example, employees worked longer hours, so their paychecks will be bigger — he does not believe sales tax holidays spur continued spending or promote hiring.

“It’s important for the retail sector,’’ he said. “It gives them the opportunity to clear a lot of the inventory . . . and they’re able to bring in all the new merchandise now that they’ll be loading up for the holiday season.’’ But, he added, “I don’t see a long-term effect on the overall economy.’’