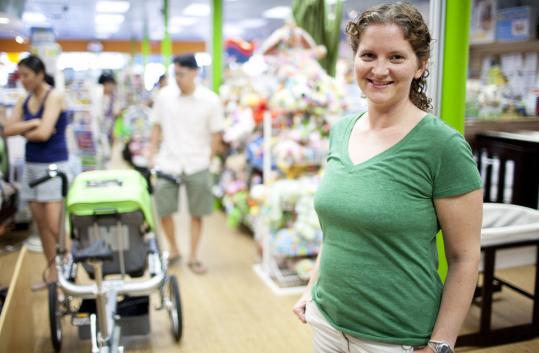 Sheri Gurock has three children, her own business with 50 employees, and some tough decisions to make.

The co-owner of Magic Beans children’s stores wants her first pregnant employee to have ample time on maternity leave because having a child is “a huge, all-consuming experience.’’ But, she said, she cannot afford to have that employee out too long.

“It’s my dream that someday Magic Beans is big enough and secure enough that anyone who works for us would get three months maternity leave, but that’s just not an economic reality right now,’’ she said. Instead, she said, “some months, my husband and I don’t get paychecks.’’

This week’s Massachusetts Supreme Judicial Court ruling clarifying maternity leave — being out longer than eight weeks means your job is not guaranteed under state law when you return — has called attention to the issue, and to employers’ struggle to balance worker needs with profitability in a stagnant economy.

Many companies are rethinking once-generous maternity policies. A 2010 Society for Human Resource Management survey found 17 percent of employers offered paid maternity leave for employees, but 7 percent planned to reduce or eliminate the benefit.

The struggling economy may be overriding employees’ concerns about quality-of-life issues in the workplace, said Kathleen Gerson, a sociology professor at New York University and author of the book “The Unfinished Revolution: How a New Generation Is Reshaping Family, Work, and Gender in America.’’

“People are so concerned with getting jobs and keeping jobs that it has pushed issues such as parental leave a little bit to the side,’’ she said. “But it also means that women are more in need of jobs than ever, and families are more dependent on women’s earnings than ever.’’

According to the US Department of Labor Bureau of Labor Statistics, in 1975 47 percent of women with children under age 18 were in the workforce; by 2008 that number was 71 percent.

The federal Family and Medical Leave Act, which covers not only maternity leave but also absences for other reasons, including the care of a sick relative, requires companies to offer 12 weeks of unpaid leave, but applies only to companies with 50 or more employees.

Workers at smaller companies are covered under state law, the 1972 Maternity Leave Act, which was the statute clarified this week by the SJC. The state law protects a woman’s job for eight weeks of leave after the birth or adoption of a child, although some companies offer more.

The federal family leave law covers about 60 percent of the US workforce, according to the Center for Economic and Policy Research in Washington, D.C.

A fifth of US employers offer no maternity-related leave of any kind, according to the center.

Mindy Fried, a Boston sociologist who wrote “Taking Time: Parental Leave Policy and Corporate Culture,’’ said the federal act, signed into law in 1993 by President Clinton, initially proposed to offer a year of paid leave but Congress whittled that down to 12 weeks, due partly to opposition by business groups.

It is one of the most stringent leave policies in the industrialized world.

Of 21 high-income countries studied by the Center for Economic and Policy Research in 2008, the United States is one of only two countries that offer no paid parental leave.

Australia also does not grant any paid leave but offers a year off unpaid. Canada gives new mothers a year off, 29 weeks of it at full salary; Sweden offers 85 weeks of maternity leave, 40 of it paid — and up to 163 weeks off for both parents combined.

Bettina Hein, chief executive and founder of Pixability, a Cambridge start-up with eight employees, said that in her native Germany, maternity leave policies are far more generous than in the United States, and paid leave is the norm. Hein said she wants to offer her employees benefits similar to those under the German system.

“I think it’s important to see the whole person as an employee, not just as a human resource we switch on and off,’’ she said. “That’s not how you keep people loyal and giving their best.’’

Barry Zuckerman, chief of pediatrics at Boston Medical Center, said eight weeks of maternity leave — the time frame used in state law — is not enough time for mothers to get to know their babies. Most mothers need 12 weeks to understand their newborn’s needs, as well as their own, he said.

“I worry about the mothers who don’t have that sense of mastering that early period,’’ Zuckerman said.

Michelle Lafornara, a doctor at Boston Obstetrics & Gynecology LLC in Brookline, who gave birth to her second daughter in April, agrees that eight weeks is insufficient.

Many women also stop breast-feeding when they go back to work, she said, which, she added, is not in the best interest of mothers or babies.

Christine Koh, who is 36, three months pregnant, and runs her own design consulting business as well as a blog called Boston Mamas, said she thinks Massachusetts’ law falls short.

While more employers seem to be offering “flex time’’ or making compromises, she said women need guaranteed job security for longer than eight weeks. Even if an employer informally offers more time, an employee has no legal recourse if employers go back on their word.

“Then the rug will come out from under the mom,’’ she said.

Gurock, who owns Magic Beans with her husband, said they are currently creating a company policy for employee leave. She said she brought her children to work as infants.

Magic Beans sales associate Kristen White, who is five months pregnant, said bringing her infant to work is not an option. And while the 28-year-old said her income helps pay her young family’s mortgage, she worries that it will be difficult to leave her newborn after eight weeks.

“A child that’s two months old is still so tiny, I can’t imagine leaving at that point,’’ she said.

Katie Johnston Chase can be reached at johnstonchase@globe.com; Megan Woolhouse at mwoolhouse@globe.com.

Clarification: Sheri Gurock, owner of the Magic Beans chain of children's stores, said she would ideally offer her employees three months of "fully-paid" maternity leave, but in the current economy cannot. At the time of publication, her maternity leave policy was being drafted.