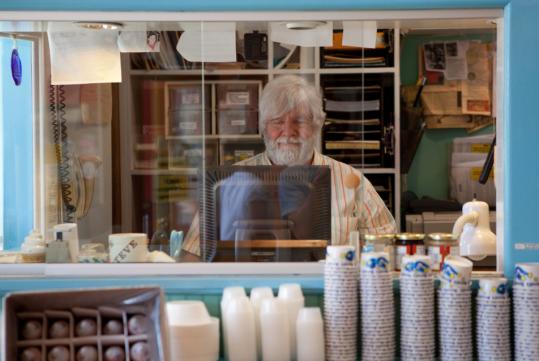 Herrell’s, the storied ice cream chain that shuttered its Boston-area shops last year, is trying to once again establish a foothold here.

When Herrell’s closed its stores in Harvard Square and Allston after more than 20 years, disappointed fans began sending hundreds of e-mails and letters asking the company to return to the Boston area, said Judy Herrell, the president of Herrell’s Development Corp.

Now, the Northampton-based company, which has stores in North Adams, Huntington, N.Y., and Northampton, is staging a Boston-area comeback, with plans to open as early as spring.

“I really want to be back in Boston,’’ Herrell said.

Herrell, who married founder Steve Herrell in 1985 and divorced him in 2000, said her favorite potential storefront is a small L-shaped building near the New England Aquarium. She also is exploring locations in Harvard Square, Brookline, Somer ville, the Theatre District, and the Boston Medical Center area.

Herrell’s is trying to reenter the Boston market in the middle of a difficult environment in which competition is fierce and rents are high. Ice cream stores have suffered more from the recession than other restaurants, since ice cream is more expendable than lunch and dinner. About 5 percent of all ice cream shops nationwide closed in 2009, said Dennis Lombardi of WD Partners, a restaurant and retail consulting firm in Dublin, Ohio.

Lombardi said that Herrell’s would be wise to choose a site with high pedestrian traffic but without direct competition with other ice cream and frozen yogurt shops, since competing stores split the customer base rather than increase the total number of consumers. “You’ve got to be king of the mountain in your own particular mountain,’’ he said.

Premium ice cream shops have a particular advantage among affluent consumers, though, said Darren Tristano, executive vice president at Technomic Inc., a food industry consulting firm in Chicago. “If your product is good quality and priced right, and your service is well executed, consumers will walk the extra distance to go find you,’’ he said.

Steve Herrell founded Steve’s Ice Cream in Davis Square in 1973, where he started breaking up cookies and mixing them with ice cream, inventing cookies and cream. He sold the store and its naming rights to Joey Crugnale, the founder of Bertucci’s Inc., in 1977 — but not the right to its recipes. Herrell moved to Northampton in 1978 to become a piano tuner and realized that ice cream was calling, so he opened his first Herrell’s store in Northampton in 1980.

Starting in 1982, Herrell’s Ice Cream opened several stores around Boston to sell his premium ice cream treats. Steve and Judy Herrell split the chain into two companies in 2008: Herrell’s Development, which she leads to coordinate with franchisees, and Herrell’s Ice Cream, of which he is president and runs the store in Northampton.

But as the chain faced increased competition from other ice cream and frozen yogurt shops, one store after another closed. The chain also suffered from disputes with franchisees over rising fees, among other things. The two holdouts in the Boston area — in Harvard Square and Allston — closed last year.

Some customers are looking forward to Herrell’s comeback.

Linda Holland, 56, of London, a biology teacher teaching summer school in Cambridge, said she would go back to Herrell’s if it reopened. Holland had gone to Herrell’s about twice a week every summer for 15 years. She said she was disappointed when she recently tried to take her German friend to Herrell’s, only to find it closed.

“I liked all the different flavors they had,’’ Holland said. “I liked that it was down a little street you had to find.’’

Jeffrey Stanett, 67, who owned the Herrell’s store in Harvard Square until it closed last fall after 27 years, has employed several former servers to help build First Printer Restaurant, Bar, and Grill, which he plans to open in the same space this fall. The two managers of Allston’s former Herrell’s store still attract customers to the same location, with breakfast and Coop’s ice cream at the Allston Cafe.

And Marc Cooper, 65, who still runs an ice cream and hot fudge factory in Watertown, said he has not lost any of his 40 or so clients with his new brand name, Coop’s, while he uses similar recipes.

“Now I’m an independent manufacturer without the name Herrell’s — which turned out not to be important to people,’’ Cooper said.

Correction: The original version of this article incorrectly stated that Steve Harrell moved to Northampton to become a piano tutor. He instead left to work as a piano tuner.