No letup in foreclosures

1 million-plus homes apt to be forfeited in 2010 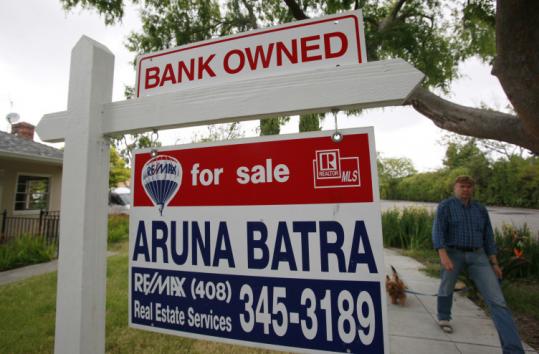 LOS ANGELES — More than 1 million US households will probably lose their homes to foreclosure this year as lenders work their way through a huge backlog of borrowers who have fallen behind on their loans.

Nearly 528,000 homes were taken over by lenders in the first six months of the year, a rate that is on track to eclipse the more than 900,000 homes repossessed in 2009, according to data released yesterday by RealtyTrac Inc., a foreclosure listing service.

“That would be unprecedented,’’ said Rick Sharga, a senior vice president at RealtyTrac.

Lenders have historically taken over about 100,000 homes a year, Sharga said.

The surge in home repossessions reflects a foreclosure crisis that remains a crippling drag on the housing market, despite having shown signs of leveling off in recent months.

The pace at which homeowners fall behind in payments and enter the foreclosure process has slowed as banks continue to let delinquent borrowers stay longer in their homes, rather than add to the glut of foreclosed properties on the market. At the same time, lenders have stepped up repossessions in an effort to clear out the backlog of distressed inventory on their books.

The number of households facing foreclosure in the first half of the year climbed 8 percent, versus the same period last year, but dropped 5 percent from the last six months of 2009, according to RealtyTrac, which tracks notices for defaults, scheduled home auctions, and repossessions.

In all, about 1.7 million homeowners received a foreclosure-related warning between January and June. That translates to one in 78 US homes.

Foreclosure notices posted monthly declines in April, May, and June, but Sharga said not to read too much into that.

“The banks are really sort of controlling or managing the dial on how fast these things get processed so they can ultimately manage the inventory of distressed assets on the market,’’ he said.

On average, it takes about 15 months for a home loan to go from being 30 days late to the property being foreclosed and sold, according to Lender Processing Services Inc., which tracks mortgages.

Assuming the US economy does not worsen, Sharga projects it will take lenders through 2013 to resolve the backlog of distressed properties they have on their books right now.

And a new wave of foreclosures could be coming in the second half of the year, especially if the unemployment rate remains high, mortgage-assistance programs fail, and the economy does not improve fast enough to lift home sales.

“The downward pressure from foreclosures will persist, and prices will be very weak well into 2012,’’ said Celia Chen, at Moody’s Economy.com.

She projects home prices will fall as much as 6 percent over the next 12 months from where they were in the first quarter.

Economic woes, such as unemployment or reduced income, continue to be the main catalysts for foreclosures. Initially, lax lending standards were the culprit. Now, homeowners with good credit who took out conventional, fixed-rate loans are the fastest-growing group of foreclosures.

There are more than 7.3 million home loans in some stage of delinquency, according to Lender Processing Services.

The Obama administration’s $75 billion foreclosure prevention effort has made only a small dent in the problem. Over a third of the 1.2 million borrowers who have enrolled in the mortgage modification program have dropped out.