THIS STORY HAS BEEN FORMATTED FOR EASY PRINTING
Job Doc

Bike mechanic draws on love of sport, and love of tinkering 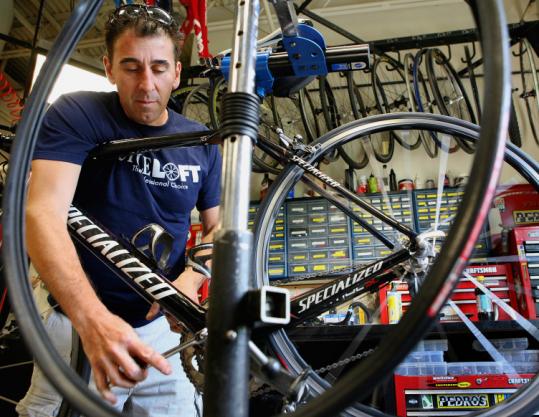 Anthony Laskaris doesn’t tinker with internal combustion engines, but it’s a different story for a broken Weed Wacker, a leaky pipe, or a malfunctioning dishwasher.

He likes to take things apart, see how they work, and put them back together again. That’s how he ended up head bicycle mechanic at the Cycle Loft.

“I like shiny, moving, mechanical precision machines, and I choose to exercise my fix-it ability on bicycles,’’ said Laskaris, an avid 150-mile-a-week cyclist who is also vice president and head buyer at the Burlington shop.

Bicycles need constant “small bits’’ of maintenance — pumping up tires, lubricating chains, adjusting gears — but, Laskaris said: “If folks find out how simple bikes are, we’re in trouble, although some people are challenged by the darnedest things, even turning the bikes upside down and moving the pedals, so I think we will always have work.’’

Laskaris started cycling as a young teen — he likes to quip that he was too short for basketball and too slow for soccer.

When his military family was stationed overseas in Athens, he often found himself hanging out in the bike center, volunteering a few hours and eventually participating in clubs, and later, amateur races.

“The nice thing about road riding is that you can do it from your front door,’’ said Laskaris. “Asphalt is the same everywhere.’’ He apprenticed under several bike mechanics through the years, with his mentor being an old-school rider who taught him to repair bikes the old-fashioned way. “Most bike mechanics tend not to read manuals,’’ he said.

What sort of tools do you use? Is it like an auto mechanic, where you’re judged by the quality of your tools?

You can judge a mechanic by their tools, but we’re told never to blame our tools. In a pinch, I fabricate my own tools. Some of the best bike mechanics are also tool collectors; I am certain I have $12,000 to $15,000 worth of tools. I have been professionally fixing bikes since 1983, and I still have some of my original tools. I will buy a tool even when, in my heart of hearts, I know I will never use it again.

What advice would you give to someone who wants to become a bike mechanic?

It’s a labor of love, and something you should be passionate about. Get started early and see if you have an aptitude for it. You’ll need the approval of someone in the industry, such as an experienced mechanic, for mentoring or apprenticeship.

What other jobs can a bike lover get?

Of course, there are commercial riders such as food-delivery cyclists or bike messengers, as well as bike retail. A lot of guys and gals who are bike mechanics go on to more sophisticated engineering challenges. They’re paying their way through college or grad school and go on to be engineers, chemists, or to work with smart car companies — anything associated with transportation.

What’s it like to be in a bike race?

Customers will see my shaved legs, and say, “I’m not like you; I ride a bike for fun,’’ but I ride bikes for fun as well. Put any two Americans together on wheeled vehicles, and it becomes a race. I race people with shopping carts down the grocery aisle; I race my neighbor with a lawn mower. Racing is fun.

On the job with
Anthony Laskaris, bicycle mechanic