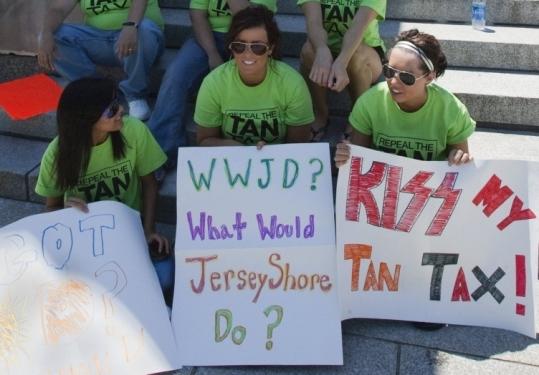 LINCOLN, Neb. — Red in the face over a new tax that is part of the federal health care bill, about 150 tanning salon owners, workers, and customers protested yesterday, the day the tax went into effect.

Some workers said their bosses had hinted they might lose their jobs because of a drop in business the 10 percent tax on the use of tanning beds might cause.

The tax is expected to raise about $2.7 billion nationally to help expand health coverage to uninsured Americans over the next decade.

The tanning tax was added after dermatologists persuaded senators to substitute it for a proposed tax on cosmetic surgery. Speakers criticized that decision and said assertions that tanning beds cause skin cancer are misleading. Tanning salons give people controlled dosages of rays that create “base tans’’ which help prevent unhealthy sunburns, said Joe Levy, vice president of International Smart Tan Network, an industry association.

And advisers to the Food and Drug Administration have recommended tighter controls on artificial tanning, from requiring parental consent forms to banning use of tanning parlors by younger teens.