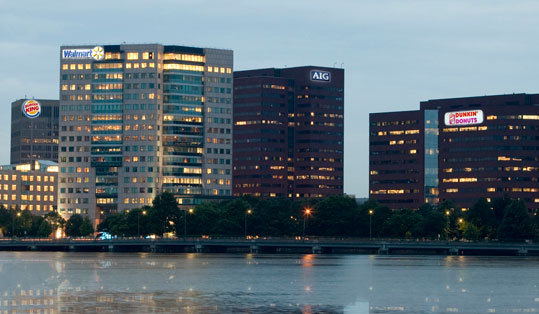 Every city can use a slogan. Here’s a new one for Cambridge: Your logo here!

It might fit. Cambridge officials are pushing a zoning change that would make it easier for companies to affix their names to big, lighted signs atop office buildings and limit the ability of opponents to challenge them at City Hall or in court.

Local neighborhood groups and some public officials are ruffled over the possible impact of skyline advertising all over Cambridge, and especially along the Charles River.

“This could turn the city of Cambridge into one large billboard,’’ warns state Representative Martha Walz, whose district covers parts of Boston and Cambridge. “Is that the kind of city Cambridge wants to be?’’

OK, that’s a stretch. There are billboards in place in Cambridge and even corporate logos lighted atop some tall buildings. A couple of them, both hotels, are even located along the Charles. In fact, city planning officials say the proposal they wrote only simplifies a process that has taken place through individual zoning variances in the past.

“But it’s fair to say people have different views about whether these signs are appropriate or not,’’ says Les Barber, a city planner who wrote the proposed amendment. “It’s a fair policy question for people to talk about.’’

It’s also fair to say the proposed zoning amendment would change standards and make it easier for companies to promote their names high atop buildings.

“This is not a normal thing in Cambridge, to see huge signs all over the place,’’ says Phillip “Terry’’ Ragon. “As a citizen, I think it’s outrageous.’’

Ragon is more than an interested Cambridge citizen. He is the founder of InterSystems Corp., which leases nearly half of One Memorial Drive, a 17-story office building at the foot of the Longfellow Bridge near the Massachusetts Institute of Technology.

InterSystems has had its headquarters in the building for the past 22 years. He believes the zoning issue that could affect the entire city was sparked by a long-running dispute between his business, his landlord, and a second big tenant — Microsoft Corp.

Two years ago, InterSystems sued building owner Equity Office Partners, a subsidiary of Blackstone Group, alleging it conspired with Microsoft to lease space that InterSystems had rights to and sought to drive up rents in the process.

The lawsuit was settled, but tensions remained between InterSystems and the other two. Ragon says the landlord and Microsoft want to put the software giant’s name atop the office building, but would not be able to overcome his objections under current zoning rules (the settlement in the lawsuit currently limits both companies to discreet ground-level signs outside the building).

Microsoft didn’t want to talk about the building or the zoning issue. The landlord said it wasn’t driving the zoning proposal.

“We are not involved in this filing,’’ said Tom Bakke, market managing director at Equity Office Properties.

But Ragon is waging a public campaign to draw attention to the zoning proposal, alerting elected officials and community groups. He’s planning to meet MIT president Susan Hockfield today to ask for her support. Ragon is even distributing brochures that imagine buildings along the Cambridge side of the Charles sporting corporate logos of sizes he says would be permitted. “Is this our future skyline?’’ it asks.

Ragon isn’t alone. The Boston Society of Architects plans to urge Cambridge officials to slow down the approval process. Some neighborhood groups say the proposal has taken them by surprise and are unsure what to make of it yet.

“People just don’t know, to be honest,’’ says Bill August, president of the Cambridgeport Neighborhood Association. “No one has focused on the substance to say with confidence this is an example of giving away the store.’’

Two reasons for that lack of focus may be that the zoning change has had a low profile so far, and the odd timing for the public hearings. The two hearings are scheduled for next week — including one the day after the long July Fourth weekend — one of the busiest vacation weeks of the summer.

“That has my antenna up,’’ says Majorie Decker, a city councilor. “I’ve been hearing about this through the grapevine.’’

Six of the city’s nine councilors must vote for the zoning amendment for it to be enacted.

Hugh Russell, an architect who chairs the Cambridge Planning Board, says city officials have been talking about changing zoning for signs for years. He says most cases that come to the city as zoning variance requests go through with no complaints.

“Everybody who’s a big tenant in a big building wants their name on top, so we’ve been recommending they be granted,’’ says Russell. “We’ve been doing it, and the signs are tasteful and informative and add a little sparkle to the nighttime sky.’’

Could Cambridge become the city of corporate light? By making it easier to illuminate the night sky, Cambridge might acquire an entirely new PC reputation: Home of the Professional Corporation.