Jobless claims up, home sales down 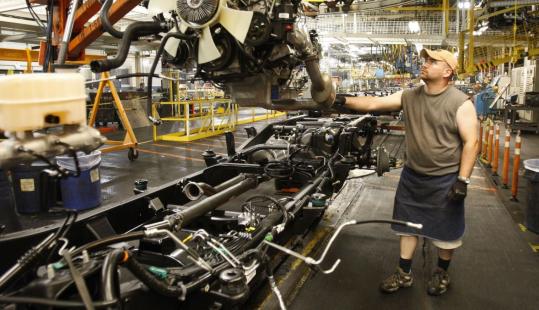 Manufacturing slipped in June but was still at a level that suggests growth in the industrial sector. (Carlos Osorio/Associated Press)
By Christopher S. Rugaber Associated Press / July 2, 2010

WASHINGTON — Fears that economic recovery is fizzling grew yesterday after the government and private sector issued weak reports on a number of fronts.

Unemployment claims are up, home sales are plunging without government incentives, and manufacturing growth is slowing.

Meanwhile, 1.3 million people are without federal jobless benefits now that Congress adjourned for a weeklong Independence Day recess without passing an extension.

All of this worries economists. As jobless claims grow and benefits shrink, Americans have less money to spend, and the economy cannot grow fast enough to create new jobs. Some economists are revising their forecasts for growth in the third quarter. Others are afraid the country is on the verge of falling back into a recession.

“We find the level and direction in jobless claims somewhat troubling, and the increase is likely to feed double-dip fears,’’ said John Ryding, an economist at RDQ Economics, in a note to clients.

New claims for benefits jumped by 13,000 to a seasonally adjusted 472,000, the Labor Department said yesterday. The four-week average, which smooths fluctuations, rose to 466,500, its highest level since March.

Claims have remained stuck above 450,000 since the beginning of the year. Requests for unemployment benefits dropped steadily last year after reaching a peak of 651,000 in March 2009. Economists say they will feel more confident about sustained job growth when initial claims fall below 425,000.

The housing market is also weighing on the economy. The number of buyers who signed contracts to purchase homes tumbled 30 percent in May, the National Association of Realtors said. And construction spending declined 0.2 percent in May as residential building fell, the Commerce Department said.

Separately, the Institute for Supply Management, an industry trade group, said its manufacturing index slipped in June. But it is still at a level that suggests growth in the industrial sector, which has helped drive the economic recovery.

The industrial sector’s growth also cooled slightly in the 16 countries using the euro and the United Kingdom.

The troubling information on the economy comes a day before the Labor Department is scheduled to release the June jobs report. That is expected to show a modest rebound in private-sector hiring. Overall, employers are expected to cut a net total of 110,000 positions, but that includes the loss of about 240,000 temporary census jobs. Private employers are projected to add 112,000 jobs, according to a survey of economists by Thomson Reuters.

That would be an improvement from May, when businesses added 41,000 workers. But the economy needs to generate at least 100,000 net new jobs per month to keep up with population growth, and probably twice that number to bring down the jobless rate.

The unemployment rate is expected to edge up to 9.8 percent from 9.7 percent in May.

Layoffs are rising in the public sector, as states and local governments struggle to close persistent budget gaps.