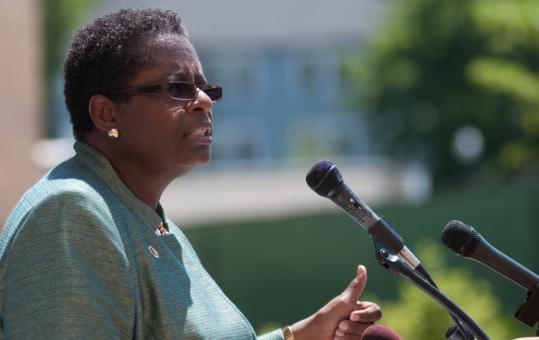 ROSLINDALE — Sandra B. Henriquez was thrilled when she got her first look at a newly rebuilt section of the Washington Beech public housing project yesterday. “Oh, my gosh,’’ Henriquez said as she drove into the complex. “Oh, my gosh.’’

Henriquez has never lived at Washington Beech, but in a way the visit was a homecoming — she pushed for improvements to the formerly dilapidated and dreary block of brick buildings during her 13 years as head of the Boston Housing Authority. She left Boston last year to serve as assistant secretary of the Office of Public and Indian Housing at the US Department of Housing and now is charged with helping to upgrade the nation’s ailing public housing stock.

She said Washington Beech exemplifies the possibilities for making improvements — and is a warning about what happens when public housing is neglected for too long.

Yesterday, Henriquez held a hand over her heart and beamed as she viewed a small neighborhood of colorful townhouses and apartments with walkways, gardens, and a splashing water fountain.

“This is a true commitment and a true picture of what can be done,’’ she said. “It is to die for.’’

Washington Beech, built in 1952, was allowed to fall into such disrepair over decades that it had to be demolished and rebuilt at a cost of about $100 million. Funding came from federal stimulus money and a US grant for severely distressed properties. The 266-unit project is being replaced by a less dense layout with 206 energy-efficient homes, designed to more resemble a neighborhood than institutional complex.

“They get so obsolete and uninhabitable that the only thing you can do is tear them down and start again,’’ Henriquez said of places like Washington Beech. “That is what we want to avoid.’’

Henriquez, who started at HUD last June, is advocating for federal legislation that would dramatically change how public housing is funded. The proposal, known as the Preservation, Enhancement, and Transformation of Rental Assistance Act, would allow housing authorities to take out mortgages to fund improvements and keep current projects afloat.

The complex bill also aims to simplify the federal housing bureaucracy, currently bogged down with 13 rental assistance programs, and provide low-income tenants more of a choice in where they live.

The Obama administration says it supports the plan in hopes of saving public housing units, which are being sold and demolished at a rate of about 10,000 per year. In Massachusetts, about 2,045 public housing units have been lost over the last decade, HUD officials say.

“We are bringing public housing into the world of real estate,’’ said Henriquez. “We are unleashing untapped equity.’’

But the legislation is already spurring criticism and concern as local housing officials and advocates pick apart the details.

Aaron Gornstein, the executive director of the local nonprofit Citizens’ Housing and Planning Association, said the bill is needed to help chronically underfunded housing projects. But he wants to know more about such issues as how to keep units public in perpetuity, and how the law handles properties that go into mortgage default.

“This would be the biggest change to public housing since the program started in 1937,’’ Gornstein said.

Lydia Agro, communications director for the BHA, said local officials have “serious concerns’’ about the bill’s provisions for tenant protections, waiting lists, and subsidies for individual projects. “There are a lot of details that need to be talked about, worked out, and discussed,’’ she said.

Henriquez, who is traveling around the country to talk about the bill, said the Obama administration is eager to help craft a proposal that can pass on Capitol Hill. She said she was glad to return to Boston, a city she often cites in Washington as a model of public housing.

She joined Boston Mayor Thomas M. Menino, Governor Deval Patrick, and others to celebrate the first phase of redevelopment of Washington Beech. In addition to the 206 new units, the project will eventually include 136 other “affordable housing opportunities,’’ such as rent subsidies and financial grants, to help people buy homes of their own. The idea is to offset the housing units lost as a result of reconstruction.

The second phase of the project is scheduled to be completed in 2012.