He offers cautious view of conditions 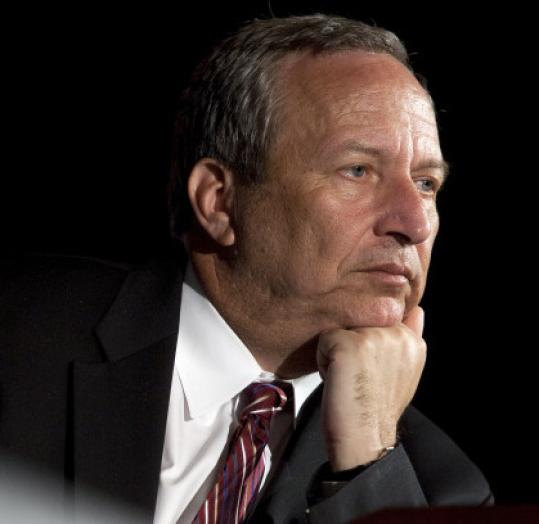 The US economy has probably begun a lasting recovery, but the outlook has become more uncertain in recent weeks in the face of the European debt crisis, gyrating stock markets, and weaker-than-expected job growth, said Lawrence Summers, President Obama’s top economic adviser.

Summers, in an interview with Globe editors and reporters this week, cited progress made during the 18 months of the Obama administration, but acknowledged that the recovery still faces risks, from the premature withdrawal of federal spending aimed at stimulating the US economy to a financial meltdown in Europe to increased tensions in Korea.

Summers, the former Harvard University president and Treasury secretary under President Clinton, presented a cautious, measured view of economic conditions. For example, after expressing confidence that European policy makers would contain the government debt crisis and avoid another global financial crisis, he added that the assessment was “my best guess, and I could be wrong.’’

Or, when asked if the nation had achieved a self-sustaining recovery, Summers responded, “I think that’s the right presumption and my expectation. I wouldn’t be foolish enough to be certain.’’

Most economists believe the US economy emerged from recession late last summer. It has expanded at a solid pace since then, and created jobs in each of the past five months. In recent weeks, however, new concerns about the strength of the recovery have emerged.

In May, for example, the economy added more than 400,000 jobs, but only 41,000 were in the private sector and most of the gains were attributed to temporary hiring for the US Census. Housing starts plunged following the expiration of federal home buyer tax credits at the end of April. And first-time claims for unemployment insurance remain stubbornly high, increasing by 12,000 last week to 472,000.

Summers said that economic data fluctuates, and analysts should be careful not to draw conclusions from one month’s numbers. He noted that employment gains in April — including more than 200,000 private sector jobs — were better than expected, and estimated the economy is creating an average of 120,000 to 130,000 private sector jobs a month. Housing is also on the mend, Summers said, with prices nationally higher than expected and “the sense of freefall generally arrested.’’ Despite the downshift that has followed the expiration of home buyer tax credits, he said housing markets should regain traction this summer and policy makers shouldn’t rush to put buying incentives back in place.

Summers said the federal government’s stimulus spending has worked, and he hasn’t seen evidence, such as a spike in interest rates or plunge in consumer confidence and spending, that would suggest otherwise. Over the medium and long term, Summers said, policy makers and lawmakers must reduce mounting federal deficits, but should move carefully in the short term.

If spending is cut too much or too quickly, it could derail the recovery, he said.

One risk to the recovery, Summers said, would come if investors and capital markets began to view the US situation as similar to that of Japan, which in the early 1990s experienced its own real estate crash and banking crisis. When the Japanese economy began to show signs of improvement, policy makers withdrew stimulative policies too soon, leading to “false dawns’’ and economic stagnation.

Other risks — “none super-high,’’ Summers said — would include a widespread aversion to risk that would lead investors to pull out of capital markets and a “rush to cash,’’ and geopolitical events, such as a new conflict in Korea, another terrorist attack in the United States, or events that would drive a spike in oil prices.

Summers said he doesn’t expect the BP oil well disaster in the Gulf of Mexico to lead to such a spike, or to damage the broader US economy. “It is locally devastating,’’ he said.