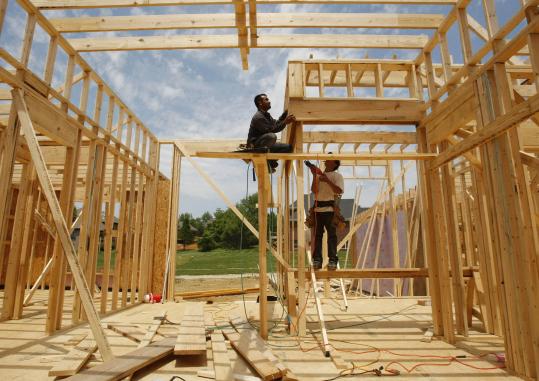 Construction workers framed a new home in Louisville, Ky. Homebuilders are losing confidence in the housing market, and they could drag on the economy. Analysts anticipate home sales will slow in the second half of this year. (Ed Reinke/ Associated Press)
By Alan Zibel Associated Press / June 16, 2010

WASHINGTON — Homebuilders are feeling less confident in the recovery now that government incentives for buyers have expired.

Their pessimism could drag on the economy, which may not benefit so much from the job creation that construction typically generates throughout various sectors.

The National Association of Home Builders said yesterday its housing market index fell to 17 in June, sinking five points after two straight months of increases. It was the lowest level since March.

Builders had been more optimistic earlier in the year when buyers could take advantage of tax credits of up to $8,000. Those incentives expired on April 30, although buyers with signed contracts have until June 30 to complete their purchases.

Experts anticipate home sales will slow in the second half of this year. In addition, high unemployment and tight mortgage lending continue to keep many buyers on the sidelines.

John Wieland, CEO of Atlanta-based John Wieland Homes and Neighborhoods, said his company has seen a decline in sales the past two months. Consumers are nervous about the economy, especially given the stock market’s downturn in recent months, he said.

“It doesn’t give you that warm feeling that makes you want to go out and spend a couple hundred thousand dollars,’’ Wieland said. “It’s just an unusually uncertain time in America.’’

The drop in activity is “a wake-up call to the fact that the market will struggle to stand on its own two feet without the tax credit,’’ wrote Paul Dales, an economist with Capital Economics. “The double-dip in both activity and prices that we have been expecting for some time appears to have begun.’’

New homes sales made up about 7 percent of the housing market last year. That’s down from about 15 percent before the bust.

It’s also bad news for the economy. Each new home built creates the equivalent of three jobs for a year and generates about $90,000 in taxes paid to local and federal authorities, according to the National Association of Home Builders. The impact is felt across multiple industries, from makers of faucets and dishwashers to lumber yards.

But it has weakened in recent years. Spending on residential construction and remodeling made up only about 2.4 percent of the nation’s economic activity in the first quarter of the year. That’s down from a peak of more than 6 percent during the housing market’s boom years.

In a typical economic recovery, the construction sector provides much of the fuel. But developers are trying to sell a tremendous glut of homes built during the boom years and they are competing against foreclosed homes selling at deep discounts.

Due to the tax credits, sales of new homes rose nearly 15 percent in April.

But now that they are gone, “the reduction in consumer activity may have been more dramatic than some builders had anticipated,’’ said Bob Jones, a builder from Bloomfield Hills, Mich., and the Washington-based trade group’s chairman.