A health plan for Partners

Hospital group can be at the forefront of sweeping industry changes, its new CEO asserts 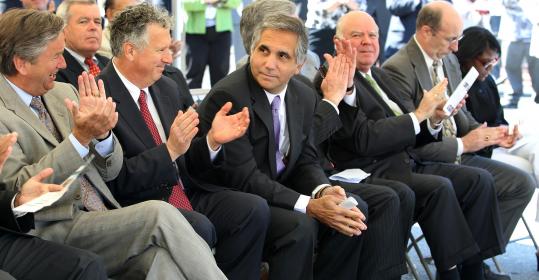 Gary L. Gottlieb (third from left), chief executive of Partners HealthCare System, attended the groundbreaking ceremony for the expansion of the Lynn Community Health Center earlier this month. One of Gottlieb’s goals for the year is to raise the public profile of Partners. It’s easier for the public to vilify the company over rising costs than to vilify the doctors in the field, he said. (Pat Greenhouse/ Globe Staff)
By Robert Weisman Globe Staff / June 13, 2010

Partners HealthCare System Inc. will try to slow the rise of medical costs in the coming year by trimming hospital budgets, working with payers to find shared savings, and applying for federal pilot programs that offer innovative ways to provide and pay for health care, its new chief executive said in an interview.

The focus on lowering costs will be part of a larger campaign by the region’s largest hospital and doctors network to boost quality and efficiency and make health care less “transactional,’’ said Dr. Gary L. Gottlieb.

“So much of what we do is transactional,’’ said Gottlieb, 55, who took over the top job at Partners on Jan. 1. “I want to make the system overall focused on patients’ needs, what they want, what families’ needs are, and the most optimal services that exist in our doctors’ offices, in our hospitals, in our in-home services.’’

Gottlieb said Partners, which pledged $40 million this year to reduce health premiums for small businesses, is eager to work with insurers to lower costs. But he stopped short of agreeing to reopen contracts that aren’t up for renewal this year, saying the company’s hospitals received increases in their last contracts that were roughly in line with the rate of inflation in Massachusetts.

“I’m willing to hear what they have to say,’’ Gottlieb said of insurers who want to pay Partners less. “The reality is we have contracts.’’

During the interview at Partners’ corporate offices in Boston’s Prudential Center tower, Gottlieb — formerly president of the Partners-owned Brigham and Women’s Hospital and a professor of psychiatry at Harvard Medical School — also said:

■Partners and other health care companies seeking to improve health care face impatience from lawmakers and employers hit with double-digit premium hikes. That could force quick cost-cutting decisions that might hurt quality, he said.

■Budgets at the National Institutes of Health, which funnels research grants to Brigham and Women’s, Massachusetts General Hospital, and other Partners hospitals, are likely to be flat. And as two-year NIH stimulus grants run out next year, “that’s going to make it very, very challenging’’ to keep funding researchers who may be close to making important breakthroughs.

■One of his goals will be to raise the public profile of Partners, an umbrella organization less known than its hospitals. “The greatness of what we do is in those hospitals, is in those doctors. As a whole, we do even more, because there’s a value that we add with one another and we need to tell that story.’’

Citing public anger over rising health costs, Gottlieb said, “It’s easier to vilify us [Partners as a company] than to vilify somebody who just saved someone’s life or just had a discovery that changed the world.’’

Nancy Kane, management professor at Harvard School of Public Health, said Partners has been under growing pressure to tackle the cost issue. Early this year, Attorney General Martha Coakley issued a report pointing to the market clout of the best-paid providers, including Partners, as a driver of rising health care costs. Coakley’s office and the US Justice Department have been investigating how Partners negotiates contracts with insurers.

“Controlling costs is the next big push in health care,’’ Kane said. “If anyone can pull it off, it would be Partners because they have the resources. They’re also seeing downward pressure on their prices, so they won’t be able to retain their payment rates just based on market power. They’re under the gun to justify their premium prices.’’

Partners hospitals have a special obligation to take the lead in making medical care more affordable, suggested Lora Pellegrini, president of the Massachusetts Association of Health Plans, a trade group representing insurers. She cited data in the attorney general’s report showing that Partners hospitals sometimes command twice as much reimbursement from insurers as other providers for the same services.

“Unless we deal with the market power of certain providers, we’re not going to be able to deal with the escalating cost of health care,’’ Pellegrini said.

Gottlieb won’t apologize for Partners’ contracts. He said that while the price of gallbladder surgery might be higher at Brigham and Women’s than elsewhere, the profits from that procedure subsidize money-losing services like psychiatry. “To vilify Partners as the cause of health costs in Massachusetts or the United States is silly,’’ he said.

Bigger payments help prevent Partners from losing top specialists to other hospitals, Gottlieb said. It needs rates that are high enough to pay doctors “an appropriate income relative to the cost of living in Boston and the competitive national environment,’’ he said.

But even with $10.4 billion in assets, including a $1 billion endowment, the health care giant is not immune from the economy. Faced with flat patient volume, higher expenses, and a shortfall in Medicare and Medicaid payments, its income dropped 35 percent in the three months ended March 31.

Brigham and Women’s already has told department managers to identify $35 million in cuts from a $1.8 billion budget that takes effect Oct. 1. Gottlieb said cutbacks are likely at other hospitals, but it’s too soon to know whether those will involve layoffs in addition to leaving open positions unfilled and postponing investments in new programs.

“We need to focus on reducing costs as well as creating operational efficiencies,’’ he said. “Ultimately that means tighter expense budgets.’’

Gottlieb said he understands the frustration of insurers that were denied proposed rate increases by state regulators trying to protect small businesses and individuals from double-digit premium hikes. “They’re approaching the market with a knife at their neck,’’ he said. Partners decided to contribute $40 million to reducing premiums, Gottlieb said, “to take the heat out of this very intense battle’’ over rate caps. Ultimately, he said, payers, providers, employers, and state officials will have to negotiate a long-term solution to control costs.

Hoping to lead the way, Partners hopes to take part in federal pilot programs next year that seek to pioneer new health care payment and delivery models, improving performance while lowering the price of care.

“This will essentially cause innovators to move together to create new structures of care,’’ Gottlieb said. “That will drive the market away from fee-for-service medicine in a way that’s catalytic.’’