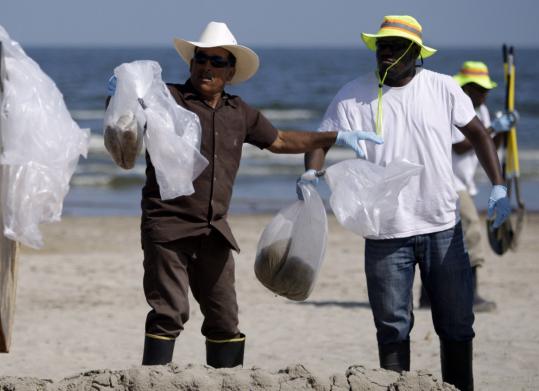 NEW YORK — A government panel roughly doubled its estimate yesterday of the amount of oil that had gushed for weeks from the out-of-control BP well even before the latest attempt to cap it.

The new calculation suggested that an amount of oil equivalent to the Exxon Valdez disaster could have been flowing into the Gulf of Mexico every 8 to 10 days.

This assessment, based on measurements taken before BP cut the riser pipe of the leaking well on June 3 to cap some of the flow, showed that approximately 25,000 to 30,000 barrels of oil could have been gushing into the Gulf each day. That is far above the previous estimate of 12,000 to 19,000 barrels a day.

Scientists say the flow rate could actually be greater now because they believe that cutting the riser to position the cap pipe may have increased the flow of the oil and gas mixture. The same governmental panel said that it would be another few days until it would be able to estimate the current flow rate.

The assessment was conducted by the Flow Rate Technical Group, which the federal government created to accurately gauge the oil being released into the Gulf after questions were raised about BP’s own estimates.

Even though the Coast Guard said BP had managed to capture 15,800 barrels of oil Wednesday, just how much this represents in the larger scheme is unclear.

What is certain, however, amid the graphic pictures of billowing oil flowing from the pipe a mile undersea, is that these new numbers will ratchet up the already intense political pressure on BP, which some politicians and scientists have accused of obstructing efforts to calculate a true rate of flow from the well.

From the beginning of the disaster, BP has provided estimates that were vastly lower than reality.

Marcia McNutt, director of the US Geological Survey and chairwoman of the Flow Rate Technical Group, said the panel’s estimates reflected work by several study groups, one in particular using video analysis and the other using sonar equipment.

The Woods Hole Oceanographic Institution on Cape Cod is among the groups enlisted by the government to measure the oil geyser. Its estimate of 25,000 to 50,000 barrels a day represents the high end of findings from the other teams, according to McNutt.

That figure was calculated using instruments that gauge the flow of hot water vents on the canyons of the ocean. Richard Camilli and Andy Bowen of Woods Hole made that measurement on May 31, officials said.

The best overlap among the assessments put the range of oil spilling from the well at 25,000 to 30,000 barrels a day, McNutt said, making it the new official estimate.

McNutt added, however, that the range of estimates the technical panel considered plausible was wider, more like 20,000 to 40,000 barrels a day. “This is obviously a challenging scientific issue, since the leak is located a mile below the ocean,’’ McNutt said.

The new estimates were released yesterday as BP told the Coast Guard that it would expedite payments to businesses crippled by the oil spill, Coast Guard officials said yesterday.

Admiral Thad W. Allen, the Coast Guard’s commander in charge of the federal response to the spill, pressed BP executives Wednesday to be more transparent in its claims processing and to provide a more comprehensive plan on spill control.

Federal officials told BP about their “concern about the length of time it is taking to pay businesses,’’ and the company agreed not to wait for previous monthly losses to be tallied before making payments, Tracy Wareing of the Department of Homeland Security said at a news conference yesterday in Washington.

“BP recognized that its previous approach of waiting until after the books have closed for each month to calculate losses will not work,’’ Wareing said.

“It won’t get dollars out quickly enough to the businesses that are struggling on the ground.’’

At a hearing for a subcommittee of the Senate Homeland Security and Governmental Affairs Committee, Mayor David Camardelle of Grand Isle, La., described the dire straits of people in his community who are waiting for payments from BP to make up for financial losses from the spill.

“I have 37 applications right now that’s standing by at the community center,’’ Camardelle said, all of which are “still waiting on a $5,000 check.’’

“You got a marina that’s waiting on a check, their electricity bill — right now, the water bill and the gas bill is $5,800 at my City Hall, and I’m not going to cut the gas off.’’

While BP’s responsibility in paying for the damage and containing the spreading oil remained the focus of the Gulf disaster for yet another day, the Obama administration turned its attention yesterday afternoon to the earliest victims of the Deepwater Horizon explosion: the 11 workers who lost their lives on the rig April 20.

Obama met yesterday afternoon for nearly an hour with the families of the workers in the East Room of the White House, offering his condolences and listening to their request for more compensation.

“It is technically not his job as president to console families of men who died offshore,’’ said Keith Jones, a Baton Rouge lawyer whose 28-year-old son, Gordon, a mud engineer, died in the explosion.

“But he made it his business and we’re grateful for it.’’

How big is the spill?

Numbers to put the Gulf oil spill into perspective.
Your comment is subject to the rules of our Posting Policy
This comment may appear on your public profile. Public Profile FAQ