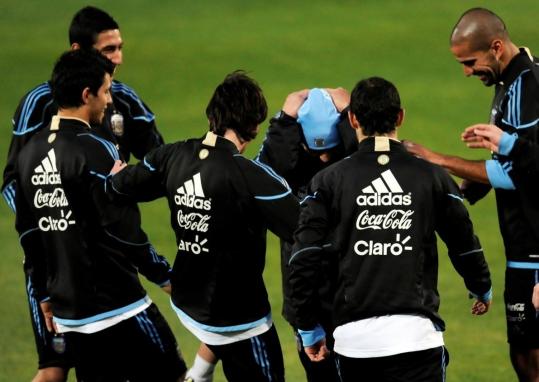 As Argentina (above) and the world’s best soccer teams gather in South Africa for the World Cup, US corporations will roll out ad campaigns designed to reach the Hispanics tuning in to the tournament’s TV broadcasts. (Daniel Garcia/ AFP/ Getty Images)
By Johnny Diaz Globe Staff / June 11, 2010

Soccer fans around the globe will be watching the 2010 World Cup when it begins today in South Africa, but some US marketers will be focusing on Hispanic consumers, many of whom are huge fans of the sport.

McDonald’s, Coca-Cola, and Anheuser-Busch are among the official sponsors of the World Cup, buying up ads domestically and abroad to cater to Hispanics.

And the Boston shaving giant Gillette plans to debut a 3-D ad for its Fusion ProGlide razor on ESPN’s 3-D channel during the tournament. It will also roll out a Spanish-language TV ad in which the razor is spinning toward the viewer, along with a soccer ball.

“The timeliness of the soccer theme ties in perfectly,’’ said Michael Norton, a Gillette spokesman.

The World Cup ad initiatives reflect a trend by media outlets and advertisers to aggressively target the Hispanic market. Latinos make up the largest minority in the United States, but it is difficult for marketers to reach them because the group consists of many races with varied tastes from different countries. Because the World Cup comes every four years and features teams of different nationalities, advertisers and marketing analysts say it presents a rare opportunity to reach a broad range of Latinos.

“With the exception of baseball, soccer is the most popular sport among Latinos,’’ said Greg Almieda an ethnic media consultant and president of Global View Communications in Providence. “For advertisers, it’s a unique opportunity to tap into a segment of the Latino population that is not captured by any other spectator sport.’’

In fact, it is a way to connect with many potential consumers.

Although soccer does not have the rabid following here of the some other sports, it has gained popularity. In part, that is due to the visibility of stars such as British player David Beckham who joined Major League Soccer in 2007.

Locally, the successes of the New England Revolution has given the sport a boost. Boston is among at least a dozen US cities bidding to host the World Cup in 2018 or 2022.

Ratings for the quadrennial tournament have grown since 1994, when it drew 7.5 million viewers in the United States. The 2006 final match in Germany drew a total of 17 million viewers on ABC and Univision, which delivered the broadcasts in English and Spanish, respectively. That was also the first year that World Cup viewing on Spanish language TV was included in the Nielsen Company’s national sample.

As a result, advertisers have continued to market heavily during the event. Overall US ad revenue spending for the 2006 World Cup was estimated at $243 million during the four-week event, according to Kantar Media, a media research firm. . By comparison, that year’s Super Bowl had $162 million in ad revenue, followed by the final five World Series games, with $160 million, and NCAA Basketball Men’s final four games, with $154 million.

Television executives and analysts are banking on big ratings — and advertising — again this year, especially given the popularity of the Mexican and US teams.

Comcast Corp., the largest US cable provider, will offer the games on high-definition channels on Univision and sister network Telefutura. It also plans to carry live coverage of 25 matches on ESPN 3-D. And all the games will be available on Comcast’s On-Demand service in English and Spanish.

“We definitely understand that the World Cup is a major, significant event among Hispanics,’’ said Andreina Zubizarreta multicultural marketing manager for the Greater Boston region of Comcast.

WUNI sold out of its in-game spots by April.

Bill Fine, president and general manager of WCVB-TV (Channel 5), said his station is close to selling out its in-game spots.

Meanwhile, WCVB and El Mundo newspaper are cosponsoring World Cup Boston 2010 this weekend. The event will offer free viewing parties at the House of Blues in the Fenway tomorrow, and New England Revolution soccer players will be there to greet fans.

“We have seen unprecedented interest from advertisers,’’ Fine said. “We hope to see that from viewers, as well.’’