Entrepreneurs: Can they bring prosperity? 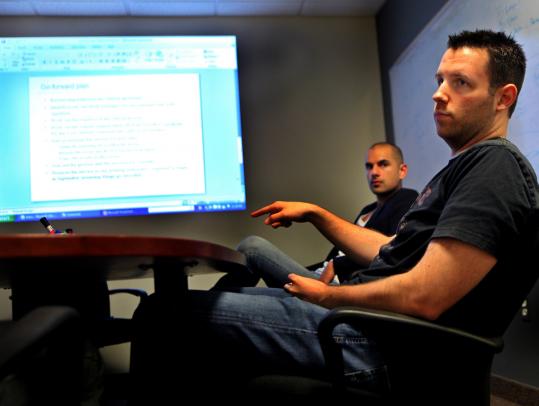 Siamak Taghaddos, a 2003 Babson College graduate, might be considered the entrepreneur’s entrepreneur.

He and David Hauser, another Babson grad, formed Grasshopper Group seven years ago to offer phone and voice mail services to start-up companies. Today, the Needham company has more than 100,000 clients and has started Grasshopper Labs, a unit focused on developing other products and services to help entrepreneurs expand their businesses.

“We’re not just offering a phone system,’’ Taghaddos said. “Our core purpose is to empower entrepreneurs.’’

So it is not surprising that he and Hauser, both 28, are spearheading an effort to create a national entrepreneurs day. Their goal is to highlight entrepreneurs’ contributions to the US economy while drawing attention to issues and challenges start-ups face.

“You hear everyone talking about bailouts and government programs, but they’re all targeted at big companies,’’ Taghaddos said. “No one is really talking to entrepreneurs and, in fact, some of the [financial reform] proposals are actually hurting us.’’

The two estimate they will need to present President Obama with one million signatures for their effort to get serious consideration. But their timing may be right: Economists say the nation’s economic recovery will depend on job creation, and most new positions will be at small and medium-size firms.

At the same time, the slow climb out of recession is fueling an entrepreneurship boom. With the US unemployment rate at 9.7 percent, many of those out of work are using the down time to launch start-ups.

According to a study from the Kauffman Foundation, a nonprofit in Kansas City, Mo., that promotes entrepreneurship, the number of companies started in 2009 was the highest it had been in 14 years. The study found that 340 out of 100,000 American adults started businesses in 2009, up 4 percent from 2008.

Out of every 100,000 people in Massachusetts, 330 are involved in some kind of entrepreneurial activity, the study said.

Oklahoma and Montana led all states, with 470 out of every 100,000 residents doing something entrepreneurial.

Mississippi was last, with just 170 entrepreneurs for every 100,000 people.

The foundation wants to tie the kickoff of its Global Entrepreneurship Week in November to Taghaddos and Hauser’s idea.

Thom Ruhe, director of entrepreneurship for the foundation, said even more businesses could have been created if Congress had not spent so much energy — and taxpayers’ money — on bailing out banks and Wall Street firms, without asking them to change their business-lending practices.

“They had a tremendous opportunity to increase small-business lending. They had tremendous leverage over these banks,’’ Ruhe said. “The time to get people to do what you want is when they are lined up with their hands out, and that didn’t happen in regards to getting banks to help entrepreneurs.’’

Taghaddos and Hauser said they have collected 1,500 signatures for a petition drive ahead of a publicity campaign scheduled to start this month. They have launched a signature drive on Facebook and Twitter, and Taghaddos has been writing about the initiative on Grasshopper’s blog for entrepreneurs.

“We have a lot of the big players in the entrepreneur space on board,’’ Taghaddos said, noting the Kauffman Foundation’s support for the initiative. “The next step is to take it to a broader audience through social-networking sites.’’

Taghaddos and Hauser met when they were undergraduate students at Babson. The Wellesley college has built a reputation as one of the leading business schools focusing on entrepreneurship.

“There’s still this notion that entrepreneurs are these idiosyncratic, crazy risk-takers hanging by their thumbs and maxing out their credit cards. It’s either that or that they’re some kind of robber barons,’’ said Babson College’s president, Leonard Schlesinger. “That’s not the case at all . . . the greater the level of uncertainty in the economy, the greater the need for entrepreneurs.’’

Schlesinger and Ruhe worry that politicians are not sincere when they talk about the role small companies will play in the economic recovery. Few have stepped forward to promote meaningful policies to make it easier to start a business, they said.

Ruhe said jobs created in the past decade were mostly at companies less than five years old, with older firms either cutting jobs or holding the line on employment.

Meanwhile, Schlesinger said, legislation as recent as February’s health care reform bill still favored a labor-based system in which people are encouraged to work for companies, as opposed to working for themselves.

“If you start from scratch and build a company into a $100 million or $200 million firm, you’re not going to get there without hiring a lot of people,’’ Ruhe said. The Kauffman study shows “a lot of people have gotten tired waiting for someone else to bail them out. They’re going out there and making their own opportunities.’’

330
out of every 100,000 people in Massachusetts are involved in some kind of
entrepreneurial activity