Not even a whisper against this wind farm

Effort to put turbines in bogs generates no protest 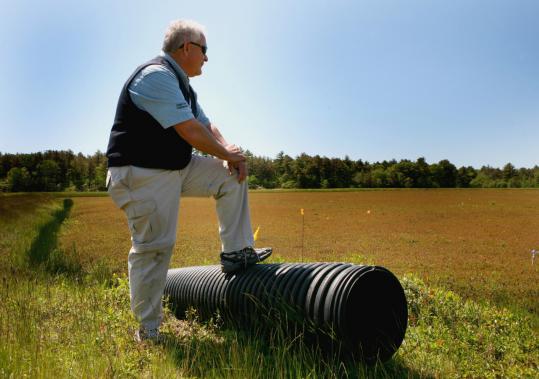 Cranberry grower Peter Beaton stood where a proposed wind farm would be on his property in Wareham. (Wendy Maeda/Globe Staff)
By Robert Preer Globe Correspondent / June 5, 2010

WAREHAM — While Cape Wind, Massachusetts’ signature wind farm, continues to generate controversy, some 30 miles up the coast a smaller windmill project is quietly sprouting in cranberry bogs with the blessing of its neighbors — so far.

Energy developer Beaufort Windpower of Boston is partnering with five cranberry growers in Wareham to install eight 328-foot turbines across six miles of bogs that would generate 20 megawatts of electricity.

But unlike Cape Wind and several other major wind farms proposed for Western Massachusetts, the Bog Wind Power Cooperative project has so far encountered no opposition in its host town. Wareham’s state legislators wrote letters supporting it, and no one filed critical comments during an environmental review by state regulators, who approved the project last month.

One reason for the lack of opposition may be Bog Wind’s isolated location: a vast open tract near the junction of Route 25 and interstates 195 and 495, where there are few neighbors.

Glen Berkowitz, president of Beaufort Windpower, said he hatched the idea after seeing successful wind projects on farms in the Western United States, and then designed the Wareham plant to avoid controversy and win quick approval.

For example, spreading the small number of turbines over such a large area reduces their visual impact. Also, they will be near existing transmission lines and not far from roads, so there will be no need for extensive tree clearing.

Perhaps the most unusual aspect of the Bog Wind proposal is how it would benefit cranberry farmers, who have struggled as competition from other states has pushed down prices and reduced business. The additional income from wind energy should reduce the temptation for farmers to sell their land for development, helping to keep one of the last great tracts of agricultural land in Massachusetts intact.

“We’re looking for ways to diversify,’’ said bog owner Peter Beaton, 62, a partner in Bog Wind. “Most farms here have been in families for generations. We want to pass them to our kids. The last thing a farmer wants to do is sell.’’

Berkowitz said he has reached out to residents to resolve concerns early. “We want to design, permit, and build the project in a way that creates public trust,’’ he said.

State Representative Susan Williams Gifford, a Wareham Republican and former selectwoman, said she has not heard any criticism of Bog Wind in town but added many people may not be aware of it.

“Among the cranberry community, this is a no-brainer,’’ Gifford said in an interview. “This is a step toward the future.’’

Bog Wind’s toughest sell may be the financial community, which is reluctant to underwrite wind projects after seeing how opposition has delayed Cape Wind and other projects in Massachusetts, such as a proposed 10-turbine farm on Brodie Mountain in the Berkshires that has been tied up in court by the developer of a nearby resort.

“The projects that are successful are either very well capitalized at the start or they have the right combination of municipal and public support,’’ said Gerard P. O’Connor, an attorney at a Waltham firm who represents alternative energy developers.

Berkowitz has raised $100,000 so far to build the $42 million plant. He’s been meeting with investors, but he said they want all permits in hand before putting up money. Bog Wind still needs approval from Wareham’s Conservation Commission and Zoning Board of Appeals, for example.

Bog Wind needs to negotiate with NStar to tie into the utility’s nearby power lines so its electricity can be distributed within the regional grid. Berkowitz would also like to obtain a sales contract with NStar, and he submitted a bid in response to the utility’s request for power earlier this year. NStar rejected it, probably because the utility does not buy power unless a project is complete, a spokesman said.

Berkowitz is racing the clock. Bog Wind will be eligible for subsidies under the federal stimulus bill if he can begin construction before the end of this year. The project has already received state and federal planning grants.

Though the Wareham turbines are just a few miles from Buzzards Bay, which has some of the strongest winds in the state, inland there is less breeze. Berkowitz’s towers would be taller than standard windmills in order to capture higher wind speeds at upper altitudes. For comparison, the windmills would be almost double the height of the one along the Southeast Expressway in Boston.