Investors to be offered stakes in post office, airports, utilities 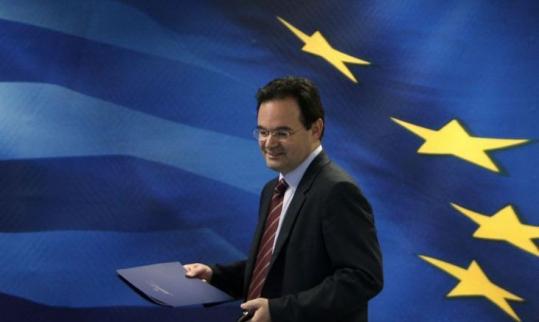 Greece’s finance minister, George Papaconstantinou, said the goal is “to have a state which guarantees public services but at the same time taps the dynamism of Greece’s economy.’’ (John Kolesidis/Reuters)
By David Jolly International Herald Tribune / June 3, 2010

PARIS — Greece announced a big sale of state-owned assets yesterday as the cash-strapped government moved to close a yawning budget deficit and fulfill the terms of an international rescue package.

The government will sell 49 percent of the state railroad, list ports and airports on the stock market, and privatize the country’s casinos, the Finance Ministry said after a cabinet meeting in Athens.

The government will also sell stakes in water utilities serving Athens and Thessaloniki, sell 39 percent of the post office, and combine its vast real estate assets into a holding company to be listed on the stock market.

Greece has been under pressure to get its finances in order since the Socialist government said last autumn that its center-right predecessor had greatly understated the size of the deficit, which was nearly 14 percent of gross domestic product last year.

The market’s focus on Greece’s problems cost the country its investment-grade credit rating and led this year to a slump in the euro and a sell-off in the debt of Greece and other so-called peripheral euro-zone countries, including Portugal and Spain.

Finance Minister George Papaconstantinou said after the cabinet meeting that the objective was “to have a state which guarantees public services but at the same time taps the dynamism of Greece’s economy,’’ Reuters reported.

The Greek Parliament in May approved austerity measures intended to save about $37 billion through 2012. The austerity plans, which have been met with strikes and sometimes violent public protest, include cuts to civil servants’ pay, reduced services, higher taxes, and tougher retirement rules.

The European Union and the International Monetary Fund last month announced a package of measures valued at more than $900 billion to help Greece and other struggling euro-zone members gain time to repair their finances after borrowing on the market became prohibitively expensive. Greece had already gotten its own $135 billion bailout.

An official who asked not to be identified because he was not authorized to speak publicly on the matter said ministers “have laid out a general framework for the government’s privatization goals, but the timing has been left unclear.’’

As a condition of the aid, Greece agreed to raise at least $1.2 billion a year from 2011 to 2013, meaning the privatizations would raise about $3.7 billion overall. With the Athens stock market down nearly 30 percent this year, it would not seem like a propitious time for initial public offerings.

The official said the ministers had not provided an estimate of the value of the privatization proceeds, but that they believed the measures on the table were worth significantly more than $1.2 billion a year.

The state will maintain its stakes in Hellenic Telecom and the electrical utility Public Power.

The government will also scrap or slow purchases of military equipment, Panos Beglitis, the Defense Ministry official in charge of military procurement, told the Associated Press.

Beglitis said some of the deals under review included the purchase of warships, fighting vehicles, and fighter jets.

NATO figures show that Greece spent 2.8 percent of gross domestic product on its armed forces in 2008. That makes it the most expensive military budget in Europe in per capita terms, and second only to the United States in the alliance. Athens has justified such spending as necessary to keep up with its regional rival, Turkey, also a NATO member.