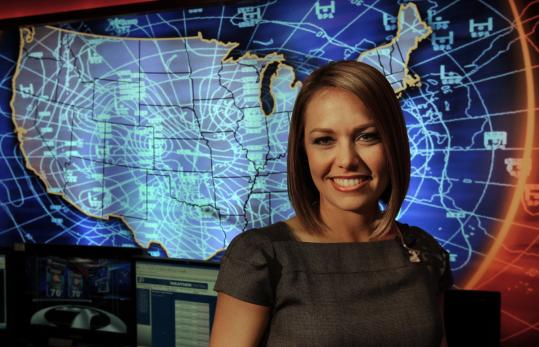 On a recent spring morning, she delivered her forecast: sunny weather, with temperatures in the upper 60s and lower 70s.

“People are basing their whole day on the forecast you make that morning,’’ Dreyer said. “There is a level of responsibility when people watch in the morning.’’

There’s a new weather pattern emerging in Boston: For the first time, all five of the meteorologists on Boston’s early-morning and midday newscasts are women. Stations have recruited and elevated more women from less-coveted weekend shifts to the highly competitive weekday morning race to deliver weather updates.

“This is the biggest battle zone,’’ said Bob Papper, head of the journalism department at Hofstra University.

Papper said some managers may be adding more female meteorologists to their morning shows because they may potentially draw more female viewers. He noted that women generally outnumber men among morning news viewers, especially in the coveted demographic of 25- to 54-year-olds. “It speaks to who they are after in the mornings,’’ he said.

But analysts say the morning makeover also reflects a national trend of more women studying atmospheric sciences, a field that has long been dominated by men in broadcasting.

“What is happening in Boston is something that is happening across the country,’’ said Betsy Kling, weeknight meteorologist in Cleveland. “Men still outnumber women when it comes to television meteorology, but more and more women are taking high visibility jobs and breaking the proverbial glass ceiling.’’

TV officials say they simply hired the best candidates for the jobs. “We found the best person that we could and that was Dylan,’’ said Chris Wayland, general manager at WHDH adding that “her appeal is to both men and women but certainly, she has a strong appeal to female viewers.’’

Bill Fine, president and general manager of WCVB-TV Channel 5, said the local increase in the number of women meteorologists also reflects how more women are entering the TV news business.

“It’s nice to see now more females being involved in the sciences and the industry in general,’’ she said.

Some of these meteorologists and professors say that today’s audiences are more willing to accept forecasts by them because of their science background. While there has always been a tradition of women presenting weather on television, very few had years of meteorology training.

“Meteorology degree programs across the country now have a little over 40 percent of majors being female,’’ said Keith Seitter, executive director of the Boston-based American Meteorological Society, which promotes atmospheric and related sciences.

Frank Colby, a meteorology professor at the University of Massachusetts Lowell, said, “What we are seeing is a trend toward women scientists,’’ he said. “To be a meteorologist, you need to be able to do math and science and this is like calculus and differential equations and apply it to the atmosphere and make sense out of it.’’

Growing up in Weymouth, she remembers watching Mish Michaels, who was the only female Boston TV meteorologist when she arrived at WHDH in 1992. Michaels held various meteorologist roles at WHDH, The Weather Channel, and WBZ before leaving to spend more time with her young daughter.

“She was the kind of female meteorologist I looked up to,’’ recalled Niles. “New England has every little piece of weather that you can imagine and it always me made question, why does this happen?’’

For Dreyer, a similar interest in math and science led her to Rutgers University, where she graduated with a bachelor’s degree in meteorology in 2003.

Dreyer worked as a meteorologist in Erie, Pa., and then Providence before landing at WHDH in 2007. She arrives at the station as early as 4 a.m. to assemble her forecasts.

“You have to know what you are talking about to be liked in Boston,’’ she said. 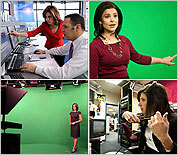