Where do we go now? 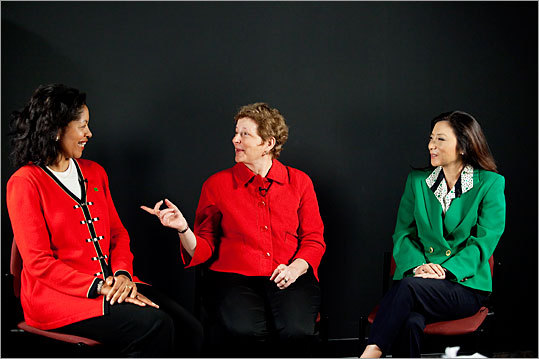 What's different about this year’s executive roundtable? We’ve got all female executives, talking business. The lack of women in corner offices and boardrooms is a perennial issue, so we decided to tackle it head on. Who best to address this topic — as well as some questions about the economy — than some of the most powerful women in Massachusetts? Gathered together were Agnes Bundy Scanlan, chief regulatory officer at TD Bank; Joanna Lau, the founder and chief executive of Lau Technologies; and Stephanie Sonnabend, chief executive of Sonesta International Hotels Corp. Business editor Shirley Leung conducted the interview at the Globe. Here are edited excerpts from the spirited conversation:

Globe: The Massachusetts economy is finally recovering. What do you see in your own company and in your sector?

Sonnabend: Not only are we better than last year, we’re better than we planned to be. So in the hotel industry, we thought the recovery would not come, really, until the third or fourth quarter of 2010, and we’re happy to report we did better in the first quarter as well.

Bundy Scanlan: Joanna has a point. When we say business is improving, we lost about 25 percent in revenue in Boston. Now we’re up 10 percent. So we’re not, certainly, back to where we were.

Globe: Will we ever be back to the way we were?

Bundy Scanlan: I don’t think so, and I think it’s going to be a difficult, long road. In our organization, TD Bank, we have found there are much more stringent guidelines in terms of business travel, in terms of really double- and triple-checking the need. We are using more virtual opportunities, technology, in order to meet each other.

Lau: There were about 8 million jobs lost. Eight million. And the population is growing. I think for most of us who run companies, who are involved with boards, the key is, how do we create more jobs?

Globe: How do we do that?

Bundy Scanlan: For my area, one way is creating new products for our customer base. I think also providing opportunities in terms of internships and growth in that area might be something for the financial services industry, but it’s not as though there are a lot of opportunities.

Sonnabend: What will really add jobs in the hotel industry will be when new properties are being built and that, of course, is real estate. We’re not seeing any properties being built now. I don’t see that changing probably for at least another year or two, and then it takes two years to build a hotel. So I don’t envision really much new job growth in the hospitality industry here in Boston for another three, four years.

Globe: By all reports, the recovery is going to be slow. So how slow?

Lau: Well, four years, because it’ll take about 40 months to really recover some of the jobs. But we’re not guaranteed that there is not going to be another bust.

Sonnabend: I don’t necessarily think it’s going to be four years across the board. There’s going to be new jobs in new industries. Like biotech. We’re just starting to make inroads there, and that’s going to have the opportunity to take off. Education, health care, I think those are the areas where we grow. And I think Massachusetts is the perfect place because of our intellectual capital.

Globe: In this recession, we’ve seen more men lose jobs than women. We’ll also see, in the long term, more women working than men. How does that change the workplace?

Bundy Scanlan: Some organizations are providing more of a work-life balance. People understand that we all work very hard, but there is a life outside the workplace, and you should cherish it and take advantage of it when you should.

Sonnabend: Younger workers are not willing to sacrifice their lives the way that some of us did, getting up and putting our careers on par with our families. For younger workers, family very much comes first. As employers, it’s important for us to understand that.

Lau: In this day and age, I’m starting to see women learn to take better care of themselves instead of just work, work, work. Because at the end of the day, the company is not going to take care of you.

Globe: Recent surveys indicate a decline in women in the boardroom. Why do you think this is happening?

Lau: People tend to appoint as directors people they know, who they are comfortable with. The old boys’ network is very much at play there.

Sonnabend: It’s not because there are not qualified women. It’s a question of taking the effort to source women.

Lau: There is a momentum of women who really believe in promoting women to join boards. In this day and age, being on the board is a fiduciary duty. It’s work, it’s truly commitment. We need diverse opinions, diverse discussions and to bring out new views, different perspectives. Uniformity — it’s not a good board.

Bundy Scanlan: I do think the coaching and the pipeline of more women board members is something that should be developed even more. But I think it’s coming. I’m optimistic.

Sonnabend: Well, I don’t think it’s happening fast enough. But I just want to say that I’m committed to making it happen.

Globe: What’s one piece of advice you would give to women who want to break the glass ceiling?

Sonnabend: Create a personal strategic plan and a vision. People as individuals need to create their own vision of where they want to get to and then their strategic plan, to really map it out very distinctly: strategy, tactics.

Bundy Scanlan: From the people I talk with who are looking for opportunities today, so many have experiences in just one area, or they’ve only been this, or they’ve only done that. I’m a firm believer in thinking about the 10-plus-year plan, and getting to that plan by taking a risk. Keep building, building, and building in terms of experience.

Lau: I have a totally different approach. Sometimes, it’s a little bit of luck. The equation for me is, preparation meets opportunity. You have to be always prepared. The three of us are life-long learners. You’re constantly learning and observing, and the opportunity is out there.