It’s a select group: Only a few Massachusetts companies made it from 1910 to 2010. And the ones that did are worth celebrating 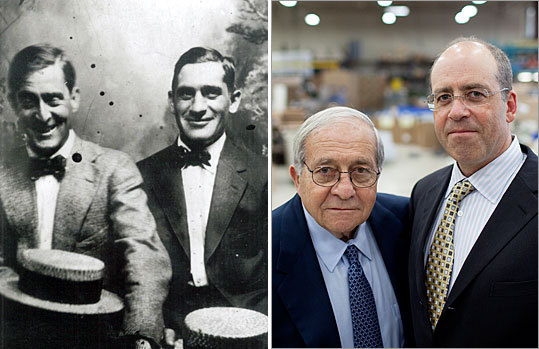 The year 1910 might have seemed like a good time to start a business in Massachusetts. Manufacturing was still expanding. Boston Harbor was a major port. Immigrants poured in from Europe, providing the labor and population growth needed to fuel the economy.

But 100 years ago, Massachusetts was approaching a transition, said Joshua Rosenbloom, a University of Kansas economics professor who has studied the period. In just a decade, leading companies would accelerate their flight south, shuttering mills, throwing thousands out of work, and beginning a long decline for the manufacturing-based economy.

That wrenching change was just one of many challenges that companies founded in 1910 had to overcome to survive the next century. They also had to navigate a Great Depression, a Great Recession, and a dozen downturns in between; adapt to changing tastes and technologies; and fight off ever-fiercer competition in a globalized economy.

Needless to say, the list of survivors is short. But as the state’s economy evolves at increasing speed, they provide long-lasting stability for their employees, customers, and owners. What better tradition to honor in the Globe 100, which celebrates companies at the foundation of the Massachusetts economy? Here’s how some of the longest-lasting businesses in the state made it for all those years:

To be in business 100 years is tough enough. But making it in textile manufacturing? In Boston?

Harry Miller Co. has done all three since it was established on the Boston waterfront, where it originally recycled damaged canvas from the ships that filled the harbor. Now in Roxbury, the company has found markets for specialty products from elevator pads to windsocks to tarps used to cover the field at Fenway Park.

“You try different things, and if you’re successful, you succeed,’’ said Sydney Miller, the chairman, chief executive, and son of the founder, Harry Miller. “The business survives because we work hard at it.’’

Miller’s plant, located near Boston Medical Center, buzzes with the sound of sewing machines, cutting machines, and the thump of grommets punched into materials. The firm specializes in defense contract work and technically challenging products that competitors in China and other nations can’t or won’t make.

For example, windsocks sold to airports must meet strict specifications from the Federal Aviation Administration. Another example: theater curtains, which Miller makes for Lincoln Center in New York, Kennedy Center in Washington, and the Citi Performing Arts Center Wang Theatre in Boston.

What makes filling the tricky orders possible is a loyal, experienced workforce of about 100, said Hank Miller, the company president and Sydney’s son. Other locations have tried to lure Miller from Boston, but it has stayed to hold onto its employees.

“Our strength is our people,’’ Hank Miller said. “They’re the ones who turn these jobs around.’’

Martin J. Coleman was an Irish immigrant who worked in the Waltham Cotton Mills and played on the company baseball team. But that wasn’t good enough for the father of his fiancee, so he tried selling real estate.

In the end, Coleman succeeded in both real estate and marriage, and 100 years later, Coleman & Sons is believed to be the oldest family-owned real estate firm in the country, said Martin Coleman III, the company president and grandson of the founder. To get there, the firm had to survive several massive real estate busts, including the Great Depression and the recent housing market mess.

The toughest downturn may have been the New England real estate bust of the early 1990s, said Coleman. Then again, 20 percent-plus mortgage rates in the early 1980s were no picnic either.

“The loyalty of customers, that’s what gets you through the tough times,’’ Coleman said. “The most important thing is not money. Do the job and help the people, and the money will follow.’’

With offices in Waltham and Littleton, Coleman & Sons today employs more than 30 people in several businesses, including residential real estate, commercial real estate, and appraisals. Unlike other firms, said Coleman, who runs the company with his wife, Pamela, agents aren’t allowed to compete with each other for clients and commissions.

“Our competition is not within these four walls,’’ Coleman said. “We’re family, and we’re all going to help each other.’’

To glimpse the history of marketing communications, study Grossman Marketing Group of Somerville. Since its founding as Massachusetts Envelope Co., the family business has moved from envelope imprinting to direct mail to Web-based campaigns.

Led today by a fourth generation, the firm still does envelopes, but also provides one-stop marketing services, including strategy, graphic design, and promotional products such as hats, mugs, and T-shirts.

“Our new business lines have evolved logically,’’ said Ben Grossman, 29, who serves as co-president with his brother, David, 33. “We know what our mission is: to help clients get their brand into the marketplace.’’

The company was started by their great-grandfather Max, who, when immigrants poured into Boston, found success with an envelope used to send cash to relatives who had not left their native countries. The firm focused on envelopes for most of the next 80 years, until Steve Grossman, Ben and David’s father, began expanding the company’s services and geographic footprint through acquisitions.

In addition to business, the Grossman family also has a tradition of public service. Max Grossman served as a “dollar-a-year-man’’ in the administration of Franklin D. Roosevelt. Steve Grossman is the former chairman of the Democratic National Committee and a candidate for state treasurer.

Today, the company, which employs about 100, including 70 in Massachusetts, has operations throughout New England, as well as in New York, Chicago, and Washington, D.C.

“You evolve with the times,’’ said Ben Grossman, “or you get left behind.’’

When Brockton was a thriving shoe manufacturing center, Barbour Corp. made weltings, the leather strips used to sew soles to uppers. Today, Barbour still makes leather weltings — the last US company to do so.

Barbour, which sells to high-end shoe makers around the world, survived by adding other products. In the 1970s, when customers wanted cheaper alternatives to leather, Barbour learned the plastics manufacturing process known as extrusion to make low-cost weltings. From there, the company moved into the marine industry, making plastic moldings for boat gunwales; the supermarket industry, with moldings for refrigeration cases; and even the trophy business, making plastic columns sold by the truckload.

It also does customized plastics for a variety of other customers.

“You can’t be too diversified,’’ said Richard Hynes, Barbour’s president, “and you can never feel secure. Someone is always coming up behind you.’’

The company, which traces its roots back to 1892, was owned by the Barbour family into the 1960s, when it was sold to a New York firm. Hynes’s father, Robert, who started under the Barbours and rose from clerk to president, bought the company in 1975 and returned it to local ownership.

Barbour today employs about 100 in Brockton and 25 in the Atlanta plant it opened in 2007. After leading the company through a tough recession, Hynes is again looking for new markets.