Retailer TJX Cos. stayed true to its formula — with a few tweaks — to lure bargain shoppers and thrive while others closed up shop 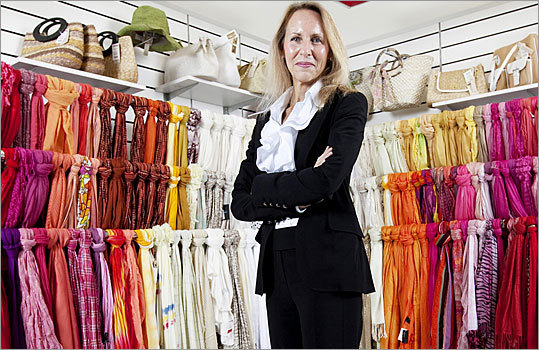 TJX chief Carol M. Meyrowitz: "We were able to seize the day. We took advantage of all the opportunities during the economic crisis." (Yoon S. Byun/Globe Staff)
By Jenn Abelson Globe Staff / May 18, 2010

In many ways, TJX Cos., the multinational off-price retailer based in Framingham, outmaneuvered the recession. As other merchants cut back on advertising, TJX stepped up its marketing, using network television to educate customers about the bargains it offered. As consumers nationwide slashed spending, the company attracted growing numbers of cost-conscious shoppers and fashionistas no longer willing to pay full price for brand names.

TJX kept the treasure hunt fresh, adding 2,000 vendors to increase the assortment of merchandise at its T.J. Maxx, Marshalls, Home Goods, and AJ Wright stores. It scooped up orders that had been canceled by rival stores because of slowing sales. And as the recession dragged down costs, TJX leaped ahead and opened 91 stores across the country and overseas, increasing its fortunes despite the downturn.

“We were able to seize the day,’’ said chief executive Carol M. Meyrowitz. “We took advantage of all the opportunities during the economic crisis.’’

Meyrowitz, 56, has been chief executive only since 2007, assuming leadership at a nightmarish time for the retail giant. TJX was grappling with one of the biggest security breaches in history. Thieves had stolen the numbers of nearly 100 million customer credit and debit cards. Questions swirled about whether the breach would scare away so many shoppers that the company would not recover.

But Meyrowitz, the daughter of a New York furrier, had spent a lifetime building a career in retail, joining the business in 1983 as a buyer and climbing all the way to the top. She never doubted TJX’s staying power. And under her leadership, fears that the company might founder have become a distant memory.

The TJX empire is stronger than ever, its discount designer merchandise appealing to customers looking for good deals. In 2009, revenue rose nearly 7 percent to $20.29 billion and net income soared 38 percent, putting TJX at the top of the Globe 100 list as the state’s best-performing public company.

“TJX is at an all-time high,’’ said Brian Tunick, a retail analyst with JP Morgan Chase & Co. “They were well-positioned after years of consistency, delivering value every day. Over the past year, they got their message out, and more consumers feeling the pinch traded to TJX.’’

Meyrowitz and her executive team also wrestled with the economic crunch from inside the company, looking for ways to save money. They slashed inventory by about 6 percent, according to retail analysts, and sold merchandise faster and at a higher profit margin than before. At the corporate headquarters, TJX contained costs; it did not give out merit raises last year, and it cut back on travel. The retailer also saved money by consolidating the purchase of goods and services for its stores, such as lighting supplies and transportation for shipping merchandise.

The recession “made us even more determined to capture customers and give them greater value,’’ Meyrowitz said. “It’s a constant pounding away.’’

Meyrowitz worked quickly to solve problems — excess inventory, for example — and then would move on, said John F. O’Brien, the lead director of TJX’s board and retired chief executive of Allmerica Financial Corp., now known as Hanover Insurance Group, the number five company on this year’s Globe 100.

“Last year there was very little room to make mistakes,’’ O’Brien said. “Focus was key. And Carol adjusted the company without hampering growth. She seized opportunities rather than just pulling back everything.’’

The company saved millions by finding cheaper real estate in prime locations. TJX opened its first shops in Poland, added stores in Germany, and expanded some chains, including AJ Wright, where profit soared to $12.6 million in 2009 from $2.9 million a year earlier, according to Richard Jaffe, a retail analyst with Stifel Nicolaus. The recession undoubtedly boosted traffic to TJX shops, retail analysts said, but the economic recovery is unlikely to undermine the company’s success. When the economy improves, rivals are expected to have fewer markdowns, making it easier for TJX to sell at higher margins.

“Good times are better for TJX than tough times,’’ Jaffe said. And plans for the good times are aggressive. TJX recently disclosed that it would unveil a new chain that could grow up to 90 shops, and upgrade existing stores. Meyrowitz said she is confident TJX will eventually expand to a $40 billion business. The lessons gleaned from the recession, she said, have only made the chain stronger.

“We all had to fight harder. And we all learned a lot through these difficult times,’’ she said. “A few retailers didn’t make it. And most who did came out stronger and gained knowledge about how to run their business better for the future.’’

Correction: Because of reporting errors, an earlier version of this story incorrectly describes TJX Cos.'s expansion plans and TJX chief executive Carol Meyrowitz's first job with the company. The entire company could double in size over time, and Meyrowitz began her career at TJX as a buyer.