THIS STORY HAS BEEN FORMATTED FOR EASY PRINTING
Globe 100 | No. 27 - Akamai Technologies

Order on the Web 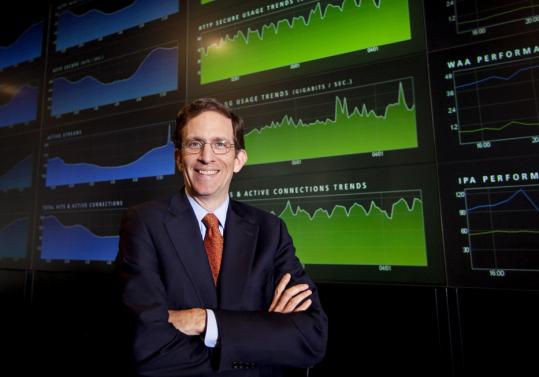 Americans watched more than 28 billion Internet videos in February alone, according to the market research firm comScore That’s nearly twice as many viewings as a year ago, and that doesn’t count a vast, surging audience in the rest of the world.

All of which is good news for Akamai Technologies, the Cambridge firm that dominates the obscure, but vital, business of Internet content delivery.

Big companies and government agencies use Akamai’s global network of Internet servers to route their videos and other Internet data as efficiently as possible, so that old movies or live sporting events are quickly delivered to desktop computers or smartphones.

“We can take congestion into account and route around it,’’ said Akamai’s chief executive Paul Sagan, who describes his company’s service as “air traffic control to optimize the flight time of our customers’ data.’’

Akamai saw the recession coming and took its medicine early, laying off 110 workers in late 2008. In 2009, Akamai’s net income of $145.9 million barely budged, while its revenue of $859.8 million was up by less than 9 percent. But that was still good enough to earn Akamai a place on the Globe 100 as the best-performing, publicly traded, telecommunications company in Massachusetts. And as the economy begins to emerge from its swoon, Sagan said the company is ready for the recovery.

“The companies who do well on the other side,’’ said Sagan, “are those who recognize things are serious first, take action really quickly, and set themselves up to grow as soon as things turn around.’’

The layoffs freed up cash that Akamai invested in key markets. These include cloud computing services, which allow companies to provide business software over the Internet, as well as online advertising and everyone’s favorite: Internet video streaming. Akamai recently helped deliver live coverage of the Masters golf tournament to millions of computers. The broadcast demonstrated Akamai’s ability to deliver Internet video in high definition, a big step up from the usual low-grade video snippets.

Whatever the speed of the recovery, Akamai bets that its corporate customers will have to invest in content delivery services to remain competitive. Terry Cudmore, a telecom analyst at Yankee Group in Boston, agrees, noting that Internet use has grown throughout the recession. “Even though the economy’s going down, traffic’s going up,’’ said Cudmore. “It’s not something you can ignore.’’

Besides, there’s a new surge of online traffic from consumers who’ve grown addicted to Internet-linked mobile devices like Apple’s popular iPhone and iPad. Ericsson, a Swedish maker of wireless networking gear, said that last December, the quantity of data transmitted over the world’s cellular systems outstripped the amount of voice traffic. That’s because millions of smartphone owners do more Web surfing and video watching than talking. Yet while over two-thirds of the human race has a mobile phone, few of these are fully Internet-capable smartphones. That’s bound to change, leading to vast new demand for online data services. “It does add more chaos to the Internet,’’ Sagan said. “It’s more networks, with more traffic.’’

And Akamai will gladly be the traffic cop. “The more chaos there is,’’ said Sagan, “the better for us.’’