THIS STORY HAS BEEN FORMATTED FOR EASY PRINTING
Globe 100 | Mass. Economy

Foreign-owned firms are drawn by the state’s critical mass of suppliers, customers, and skilled workers 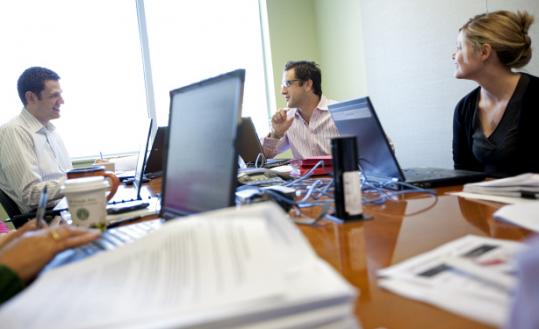 Michael Cicio didn’t stray far from his roots as he built a career in pharmaceuticals. He worked his way up from a job as a manufacturing operator in Cambridge to run production at two cutting-edge plants for Lonza Biologics , including one in Hopkinton, not far from where he grew up in Worcester.

By comparison, Fereydoun Firouz is about as worldly a corporate leader as you can find. Born in Switzerland to Iranian parents, he roamed the globe, holding senior posts in Latin America, the Mideast, and Europe on the way to becoming chief executive of EMD Serono, the fast-growing maker of biotech drugs with sprawling campuses in Rockland and Billerica.

While they traveled different paths, Cicio and Firouz, and the operations they run, mirror the globalization of the Massachusetts economy. More and more foreign companies have set up shop here or acquired local companies in the last few years. Subsidiaries of foreign-owned companies now employ about 170,000 people in Massachusetts, and many of those jobs are in high-paying industries with strong potential for future growth, such as biotechnology.

Subsidiaries of foreign companies account for 33,000 Massachusetts jobs in manufacturing alone, about 11 percent of all the industrial employment in the state, according to the Organization for International Investment in Washington.

Still, the most dynamic growth in foreign investment has been in biotech, where the state has a critical mass of suppliers, customers, and skilled workers. The state Office of International Trade and Investment says it has helped set up Massachusetts operations for 63 foreign companies since 2007, of which no fewer than 45 were in life sciences or information technology.

Take Lonza, for example: The Swiss-owned Lonza Group employs more than 8,000 people worldwide, producing complex drugs for commercial customers in processes that demand both speed and quality. To bolster its US presence, Lonza began building a manufacturing base here in 1996 with a facility in Portsmouth, N.H., that now employs about 590 people. In 2007, Lonza purchased its Hopkinton plant, located just off I-495, from New Jersey biotech Cambrex Corp.

Cicio, vice president for operations and site manager for Lonza in both Hopkinton and Portsmouth, said the company has invested more than $100 million in Hopkinton since 2007, and has grown the workforce from 80 to 340. The state helped make that happen, Cicio said, with a $2.5 million grant to connect Hopkinton’s wastewater line to neighboring Milford, to handle the increase in clean water waste from the plant.

The Hopkinton site gives Lonza’s original microbial-derived pharmaceuticals plant in Visp, Switzerland, a partner operation in the United States, close to a growing customer base in the Greater Boston biotech industry. Cicio said the Hopkinton site can produce small batches of specialized proteins for preclinical or clinical trials, as well as larger runs of commercial products.

The area’s deeply rooted high-tech industry drew Lonza here, according to Cicio. Locally, the company recruits a wide range of staffers, from high school graduates with manufacturing experience to scientists with doctoral degrees in biology.

“The reason we elected to expand here is because the skilled workforce we need is very readily available,’’ Cicio said.

At EMD Serono, another fast-growing biotech player, Firouz has overseen similar growth. The company is the US subsidiary of the German pharma giant Merck KGaA, which acquired the Swiss-owned drug maker Serono AG in 2006. EMD Serono is based just off Route 3 in Rockland, in a sparkling complex that employs 500 people. And the firm, which makes treatments for fertility problems, endocrinology, and neurodegenerative diseases, is completing a $65 million research-and-development campus in Billerica that will employ about 200 scientists.

Firouz, who was head of Serono in the United States at the time of the takeover, stayed on as president and chief executive of the Merck KGaA subsidiary. The US workforce has grown from 600 to 1,100, and the company is hiring about 100 people in 2010.

“One of our global strategies is to augment our footprint in the United States. And Massachusetts is a great place to be if you are in an innovation, technology-driven platform,’’ he said. “You’ve got the academic institutions, you’ve got the teaching hospitals, you’ve got the services around these companies. That’s what makes it so appealing.’’

Ted Carr, executive director of the Massachusetts Office of International Trade and Investment, says the draw for foreign firms is often the state’s “incredibly top-notch workforce,’’ adding, “We call that our unfair advantage.’’