A bit of flexibility goes a long way 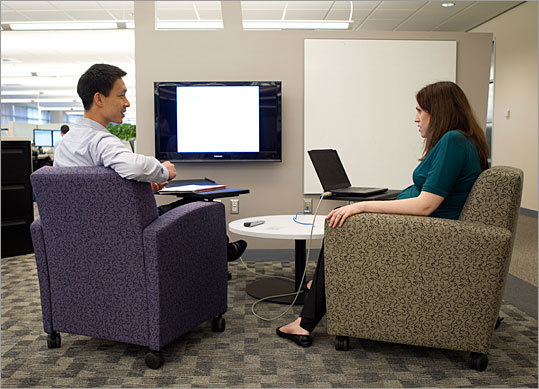 When employees like Will Chou and Bridget Ferrari aren't working in Millipore's nontraditional office, they can work from home. (Aram Boghosian for The Boston Globe)
By Erin Ailworth Globe Staff / May 18, 2010

Since the year began, Donna Donaruma has spent some 60 fewer hours than normal driving to work at Millipore Corp., a life sciences firm. That’s 2,000 miles worth of gas she hasn’t had to buy, and at least half a ton of carbon dioxide that hasn’t been pumped into the air.

The savings are a side benefit of an innovative program to encourage selected Millipore employees to work where they are most productive: at home, in the field with customers, or in a redesigned office space that resembles a swanky living room.

Most weeks, Donaruma said, she works about two days at her Pepperell home and three at her office in Billerica, where Millipore is based. There, instead of row after row of cubicles, cushy chairs are clustered near large, flat screens where workers can plug in their laptops and collaborate. Spaces are divided by glass partitions, and tables invite groups to gather. With no assigned seating, employees spread out at random.

“I’ll look for a sunny work station,’’ said Donaruma, who manages e-commerce and data solutions for the company. “The environment is really conducive to work. You’re more energetic and meeting people you didn’t know before.’’

“It’s really about having the most effective work environment for the way we work today,’’ Kupka said. “We’re on global teams, and we’re working with people who simply can’t all be in the same place at the same time.’’

And then there are the environmental savings, he said. In March, 70 employees on the flexible work program spent an average of seven fewer hours driving, and saved a total of 785 gallons in gasoline.