But costs are unlikely to increase as much as opponents feared 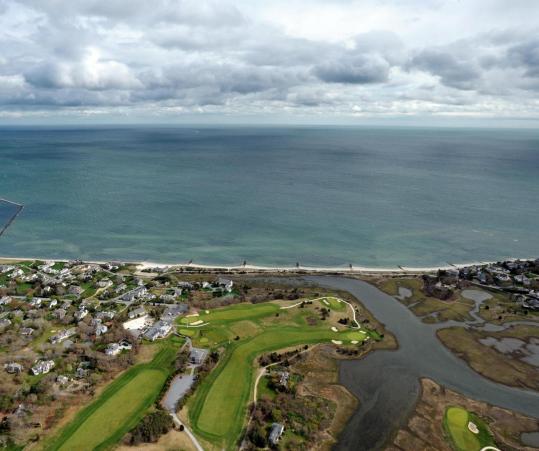 An aerial view of a small slice of Hyannis Port and the Nantucket Sound is shown with the Kennedy compound located on the left near the breakwater and the golf club in the forefront. (Merrily Lunsford/Cape Cod Times via Associated Press)
By Erin Ailworth Globe Staff / May 7, 2010

Getting electricity from the Cape Wind project could cost consumers a little bit more — but not as much as opponents feared.

An anticipated deal between utility National Grid and the controversial wind farm proposed for Nantucket Sound could add from 47 cents to $1.33 to the average customer’s monthly electricity bill, state officials said.

Massachusetts Energy and Environmental Secretary Ian Bowles said National Grid must agree to pay somewhere between 17 cents and 21 cents per kilowatt hour for the power it buys from Cape Wind to be competitive. At that price, the 130-turbine project, which received federal approval last week, would not only rival conventional energy, it could at times in the future be cheaper.

Since late last year, officials from National Grid have been negotiating a long-term contract for the utility to buy some of its power from Cape Wind, and an agreement is imminent. State regulations require the four investor-owned utilities in Massachusetts — National Grid, NStar, Western Massachusetts Electric Co., and Unitil Corp. — to enter into 10- to 15-year contracts to purchase energy from renewable sources, such as wind and solar power. By 2020, the utilities must get at least 15 percent of their power from clean energy sources.

“Taking into consideration the recent history of rising electricity prices and the experience of European offshore wind projects,’’ Bowles said, National Grid could agree to pay “17 to 21 cents, including renewable energy incentives, to be competitive in the current energy market. That is what I will be looking for in this contract.’’

A long-term contract with National Grid would be a critical step for Cape Wind developers, who need to lock in the utility’s business to help attract financing for the project, which is estimated to cost $1 billion.

Officials for National Grid and Cape Wind did not respond to a request for comment. Whatever price they agree to must be approved by the Massachusetts Department of Public Utilities.

Opponents of the Cape Wind project raised the possibility that its power would be too expensive for Massachusetts consumers, who already pay some of the highest electricity prices in the nation.

That fear was bolstered in December, when officials in Rhode Island revealed a 20-year agreement for National Grid to pay Deepwater Wind, a small offshore wind project near Block Island, 24.4 cents per kilowatt hour in 2013, its first full year of operation, with the price to rise 3.5 percent annually. The Rhode Island Public Utilities Commission rejected that agreement, citing the cost.

In February, Bowles responded with a letter to Jim Gordon, president of Cape Wind, and Tom King, National Grid’s president of US operations.

“Let me be clear: our expectation is that the Cape Wind project must produce electricity at a substantial discount to the Rhode Island offshore wind project,’’ Bowles wrote. Yesterday, Bowles said he thinks Cape Wind power would help consumers save money should conventional energy costs rise as they have in the past.

Although the price of Cape Wind’s electricity is likely to cost more than energy generated by natural gas and coal, industry insiders say, it won’t necessarily burden consumers.

“One of the things to remember is that Cape Wind will be just one source of electricity, and the price you pay for electricity represents the costs from all these different sources,’’ said Robert Kaufmann, chairman of Boston University’s department of geography and environment. “In general, fossil fuels are becoming more expensive over time and will continue to do so, and wind . . . will come down over time.’’

Lawyer and consumer advocate Jerrold Oppenheim said he thinks customers won’t notice much change in their monthly electricity bills if the price of Cape Wind power is somewhere in Bowles’s range.

That’s because the price includes a state-mandated charge of 6 cents per kilowatt hour for what are called renewable energy credits.

If not for that charge, the possible price of Cape Wind energy — for utilities and for consumers — becomes comparable to conventional energy. “I think it would have almost no impact at all’’ on bills, Oppenheim said. “You get the clean stuff for the same price as the dirty stuff.’’

And because Cape Wind’s power is made with a free and local resource, it comes with benefits that will offset its higher price tag, including cleaner air, better health, and less dependence on imported fuels, observers said.

“It’s going to be more expensive than conventional energy, there’s no question about that,’’ said Alex Klein, research director at IHS Emerging Energy Research in Cambridge. “But it’s local, it’s stable, and its emissions free.’’

The technology has already been proven, he said. Offshore wind farms are generating electricity in Europe, where nine countries collectively have installed more than 800 turbines off their coasts, according to the European Wind Energy Association.

“It works, it’s happening, and, you know, it’s being relied upon as a very large scale source of energy,’’ Klein said.

Would you pay extra for green energy?