THIS STORY HAS BEEN FORMATTED FOR EASY PRINTING
ECONOMIC IMPACT 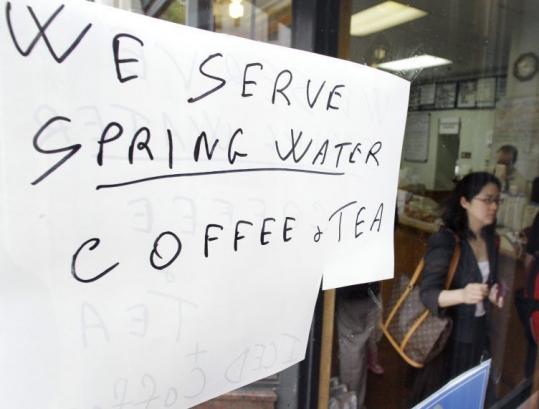 A sign at the Capitol Coffee House in the Beacon Hill neighborhood of Boston yesterday advised customers that coffee and tea were being made using bottled spring water. (Steven Senne/ Associated Press)
By Robert Gavin and Erin Ailworth and Gal Tziperman Lotan Globe Staff | Globe Correspondent / May 4, 2010

The disruption to the region’s water system has forced some 2 million people to boil water and tested the ingenuity of local businesses, but it is unlikely to have a noticeable economic impact, as long as the problem is fixed soon.

With state officials expecting to restore the drinking-water supply within the next 48 hours, analysts said, the economic effects will be similar to that of a snowstorm: short-lived. Consumers will shift spending patterns, buying more water, for example, while cutting back on other goods, while most businesses will find ways to keep operating, analysts said.

“It’s highly inconvenient, and there are individual businesses that are directly affected,’’ said Michael Goodman, an economic analyst and professor at the University of Massachusetts Dartmouth, “but as long as it’s resolved in the short term, the impact on the broader economy will be modest at worst.’’

Among the hardest hit are food processors. Kayem Foods Inc., which makes Fenway Franks, has halted production at its Chelsea plant, idling more than 300 workers. The company plans to resume some production today after bringing in water tankers. Boston Beer Co., the maker of Sam Adams beer, has stopped production at its Boston brewery, but most of its beer is brewed outside Boston.

Some other businesses, such as water bottlers, are booming. Although Brookline Ice and Coal had to halt its own ice-making operation, it has met soaring demand by purchasing ice from a Rhode Island company.

Having to buy ice has cut into the company’s profit margin, but the surge in volume, as hotels and restaurants have shut down in-house ice makers, has more than made up for the expense, said Alice Signore, Brookline Ice and Coal’s treasurer. “I think we’ll be very happy,’’ she said.

To have a lasting economic impact, the disruption to water supplies would have to last weeks, long enough for consumers to change habits, analysts said. For example, if the crisis stretched on, it could hurt tourism if travelers canceled plans rather than take the risk of not having readily available potable water, not to mention coffee.

But in the short term, businesses are quickly finding solutions. Employees at Milk Street Cafe boiled 200 quarts of water at a time in the restaurant kitchen, disconnected coffee makers from water sources, and manually poured purified water into the machines to brew coffee.

The brewing systems at Dunkin’ Donuts stores are also connected to municipal water sources. But in the Fenway and Back Bay, Olga Pithis and her partners hauled bottles of water and bags of ice to their three shops, then bought manual, stand-alone coffee machines. Employees poured in the bottled water and brewed hot coffee in all three locations.

“There’s a lot of excitement, a lot of smiles, when [customers] find out they can get their fix,’’ Pithis said. “I’d be dying if I lived in Boston and couldn’t get my coffee.’’

For the most part, it has been business as usual at local companies, with a few adjustments. At Cushman & Wakefield, the real estate services firm, Boston employees were told to drink bottled water and use hand sanitizers from emergency supplies from the recent swine flu epidemic. Fidelity Investments distributed thousands of bottles of water to its roughly 7,000 workers in downtown Boston.

Genzyme Corp., the biotechnology giant in Cambridge, was able to maintain production at its Allston manufacturing plant because of the elaborate water filtration process it has in place. But the company transported coffee to the plant from its headquarters in Cambridge, which has a different water supply and was not affected by the water breach.

In Kenmore Square, Eastern Standard restaurant reduced its cocktail list to nine drinks from the 65 normally offered, because of the logistics necessary when washing bar tools such as blenders, said bar manager Jackson Cannon. That cut into drink orders, but wine sales soared, jumping about 20 percent above normal on Saturday.

Eastern Standard has also made ice runs, served bottled water, and kept water boiling in the kitchen to clean counters and tables.

As the restaurant has faced the crisis, Cannon said, he is taken some solace in history.

“A hundred years ago, when you couldn’t trust the water,’’ he said, “you drank beer. We have plenty of beer.’’

Todd Wallack and Casey Ross of the Globe staff contributed to this report. Robert Gavin can be reached at rgavin@globe.com.