A case of regulatory jitters

The Federal Reserve Bank of Boston would oversee six banks instead of 180. Lenders would have to keep a 5 percent stake in mortgage loans they write and sell to investors. And stockbrokers might have to live up to a higher standard, as “fiduciaries’’ charged with doing what’s best for their clients.

These are just a few of the moving parts in the US Senate’s financial overhaul bill, which lawmakers will continue debating this week. The sweeping legislation has Congress in full battle mode, and it could change the way business is done, not just on Wall Street, but in Boston’s large financial sector, from banks and insurers to mutual fund managers and hedge funds.

Banks could see the swiftest changes. Under the bill, whose sponsor is Connecticut Democrat Christopher J. Dodd, head of the Senate Banking Committee, many institutions that are now regulated by the Fed would shift to the Federal Deposit Insurance Corp. And that’s not only true of small banks. State Street Corp., the financial services giant based in Boston, could end up gaining a third regulator: In addition to the state and the Fed (which would continue to oversee the nation’s largest bank holding companies), the FDIC would regulate the part of State Street that is actually a traditional bank.

“We feel the Federal Reserve is the most appropriate regulator for global financial institutions such as State Street,’’ said a spokeswoman for the company, Carolyn Cichon. She added, “New regulation should promote responsible and disciplined practices for all financial services companies and also enable the industry to continue to serve the vital needs of the economy.’’

At the heart of the bill, some elements of which were passed in a separate House measure, are provisions that seek to prevent another financial crisis. But there’s plenty to argue about. Lawmakers, to varying degrees, agree that regulators failed in their role as watchdogs, particularly at the most complex firms, where many kinds of risk-taking can happen under one roof. But in the layers of proposals aimed at making the system safer are elements that make one industry or another howl.

For instance, firms that could pose a risk to the financial system may now be defined as those with more than $50 billion in assets — and they might be asked to pay into a future fund to dismantle failing firms. That rule would apply not only to large banks but also large money market mutual funds and insurers that did not receive government funds in the recent round of bailouts.

Robert Pozen, a Boston fund executive and author of “Too Big to Save? How to Fix the US Financial System,’’ said “Money market funds should not be deemed systemically risky just because two funds . . . lost 6 cents on a dollar.’’

More broadly, Fidelity Investments, a large mutual fund manager and brokerage, is concerned about being lumped in with the banks for tougher regulation. The firm notes that it’s not an investment banker, and it doesn’t make mortgages or take consumer deposits. “Fidelity has not received any TARP funds,’’ a spokesman, Vin Loporchio, said, referring to the unpopular $700 billion Troubled Asset Relief Program — the capital infusions imposed on the nation’s largest financial companies amid the crisis.

“Rather than layering more regulation across the industry, reform should target gaps in the federal and state regulatory systems,’’ Loporchio said.

Banks are fighting the bills on a number of fronts. They oppose the Senate and House bills’ collapsing of certain bank regulators and shifting thousands of institutions to watchdogs they don’t know. In addition, the federal savings bank charter may disappear, leaving many state-chartered institutions without a simple way to switch to a federal platform, according to Daniel J. Forte, the president of the Massachusetts Bankers Association.

Large banks oppose having to pay into a resolution fund to dismantle institutions seen as “too big to fail’’ in the future. Republicans say that provision has been removed from the legislation.

Also, bank officials say a new consumer financial protection bureau, proposed by both arms of Congress, would create a layer of oversight with conflicting priorities from those of other regulators. And they are concerned that nonbanks, such as mortgage originators who helped fuel the real estate collapse, would still get less scrutiny than the banks.

Big banks and Wall Street firms also are against implementation of what’s called the Volcker rule in the Dodd bill, which could restrict banks from trading for their own accounts and owning or running hedge funds. Paul Volcker, an adviser to President Obama and a former Fed chairman, proposed the rule.

Banks also oppose a measure that would force them to spin off their derivatives trading units.

The Fed, for its part, has been lobbying to keep its role as regulator of both large and small banks — currently about 850 state member banks and 4,900 bank holding companies across the country. Taking away small banks from the Fed, Forte said, could hurt the central bank’s ability to monitor the economy.

“The Fed is intended to design monetary policy for the entire country,’’ Forte said. “The Fed would lose that perspective because they’d no longer have those institutions, no longer be talking to those bankers on a regular basis.’’

Separately, under both bills, derivatives would have to trade on exchanges — instead of privately between parties. That’s so there would be public prices and data on such instruments as credit default swaps, which grew, unnoticed by regulators, into a multibillion-dollar business that helped topple the markets.

Tracking these investments is critical, according to many observers. More important even than putting them on an exchange, said Pozen, the chairman of MFS Investment Management, is having a central clearing firm that processes those trades and can be examined by regulators.

Brokerage and insurance companies could face new regulatory and legal questions if stockbrokers and agents are required to meet a higher fiduciary standard. Under that duty, which is part of the House bill and could be included in an amendment to the Dodd bill, brokers could only sell products to clients that benefit those clients.

Critics say that definition is vague and should be addressed by the Securities and Exchange Commission.

Without an amendment, the Dodd bill recommends studying the issue — an approach that falls short, according to Stephanie Brown, general counsel of LPL Financial, a Boston broker-dealer that works with 12,000 financial advisers across the country.

“Candidly, I think we all know the issues. I wouldn’t like to see too much time wasted on studying,’’ she said.

As negotiations heat up over which companies the regulations should target, there’s an oft-heard complaint: Don’t punish us — we didn’t cause all the trouble. This region’s large venture capital industry is in that camp. It’s keeping tabs on the legislation but so far is relieved that it’s been exempted from SEC registration, while hedge funds would have to register.

Insurers are loudly complaining about additional oversight. Although American International Group. Inc. required a $180 billion bailout, industry officials say it wasn’t the insurance business that went awry. It was the New York insurer’s financial products unit, which sold credit default swaps, or insurance on mortgage-related bonds. A new uber-regulator, or council of regulators, as proposed in both the House and Senate bills, would examine non-insurance activities and keep an eye on areas of risk at all large financial firms.

The super-regulator would, in theory, look at hedge funds and other investment activities of such firms as MassMutual Financial Group. The Springfield life insurer’s Tremont Group Holdings lost $3.3 billion of its customers’ money to swindler Bernard Madoff.

MassMutual spokesman Mark Cybulski said, “MassMutual recognizes the need for and supports financial services reform. However, we feel it is important that any legislation that is passed should not impede the industry’s ability to best serve its customers.’’ He declined to be more specific.

Peter Levene, the chairman of Lloyd’s of London, the British-based insurance market that does a large part of its business in the United States, put it more bluntly: “Please go away and leave us alone,’’ he said in an interview last week. “We have no government money and no scandals. It’s got nothing to do with us.’’ 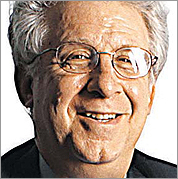