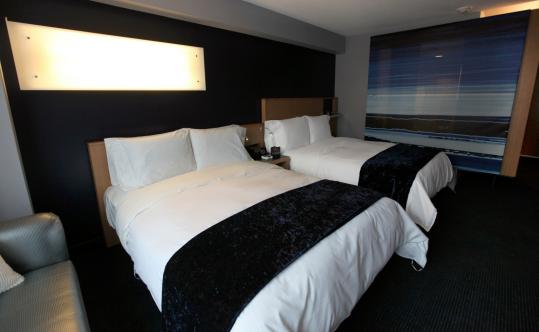 The W Boston Hotel and Residences opened in the middle of a tough hotel market and slow luxury condominium sales. (Pat Greenhouse/Globe Staff/File 2009)
By Casey Ross and Jenifer B. McKim Globe Staff / April 29, 2010

Just months after opening a 28-story tower in downtown Boston, the owner of the upscale W Boston Hotel and Residences filed for bankruptcy protection yesterday, a stunning financial breakdown for a developer that labored for more than a decade, only to open as the hotel market plummeted and condo sales still had not picked up.

Documents filed in US Bankruptcy Court in Boston by SW Boston Hotel Venture LLC, a subsidiary of Sawyer Enterprises, list liabilities of $100 million to $500 million.

Several months ago, the City of Boston provided a $10.5 million loan the developer said it needed to finish building the $234 million project.

The complex’s troubles began even before its October opening, with Sawyer struggling to pay for furnishings and high-end finishes that guests and condominium buyers expect from the W brand, which emphasizes luxury amenities and aims to cater to trendsetters.

The W’s cash flow troubles grew early this year with slow sales of its high-priced condos. Typically, large hotel complexes rely on quick sales of the condos to allow the expensive hotel operations to establish a foothold in the market.

So far, 12 of the 122 condominiums, or about 10 percent, have been sold, according to Listing Information Network, which tracks downtown Boston sales. Sawyer said more units are under agreement, but with the housing market still unsettled, closing deals for luxury condos remains difficult. The W units have sold for as much as $1.9 million for a three-bedroom and $345,000 for a studio.

In Boston’s Theatre District at the corner of Stuart and Tremont streets, the W is a striking building with a sheer glass face, accented by fluorescent backlighting. It has 235 hotel rooms on its first 15 floors and 122 luxury residences on the top 13. Rooms can cost more than $300 a night.

In a statement yesterday, Sawyer said the condo and hotel operations will not be affected by the bankruptcy filing.

SW Boston developed and owns the complex, but the hotel is operated by a separate company, Starwood Hotels & Resorts Worldwide Inc.

“Sawyer Enterprises’ goal is to restructure its existing debt and pay its creditors in full, and to continue to operate this project for the long-term,’’ the company said. “Chapter 11 provides the breathing room to do so.’’

Sawyer had been trying to develop a hotel complex on the property since the 1990s, and was close to launching one with Loews Hotels in 2001 when the 9/11 attacks sent the economy, and the travel and hospitality industries in particular, into a deep funk.

The city, while long supporting a hotel for the Park Square property, was cautious about backing Sawyer. Last summer, Sawyer executives said they needed the city funding or the complex would not open on time. When it did loan the $10.5 million, Boston required Sawyer to put up several additional properties as collateral, in case of trouble with the W complex.

“We are committed to continuing to work with the W Hotel and other creditors to achieve a speedy resolution to this matter,’’ the Menino administration said in a statement.

Real estate and hotel specialists said the W opened at precisely the wrong time, with the hotel market tanking and the luxury condo market yet to fully rebound from one of the worst downturns in decades. Overall, rates for hotel rooms are down 12 to 15 percent in the Boston area since 2007. Condo sales began to rebound at the beginning of this year, but the W found itself in competition with several other new luxury complexes, including the Clarendon in the Back Bay and 45 Province downtown.

“The business model on which their financing was approved does not work in today’s falling-rate environment,’’ said Pat Moscaritolo, chief executive of the Greater Boston Convention & Visitors Bureau. “This is not an uncommon event right now.’’

Despite the broader economic turmoil, the W bankruptcy filing was remarkably sudden.

The hotel opened with fanfare last fall. Employees arrived for a 10-day training in trolleys that blared disco music. Stepping onto a purple carpet, the employees were met by a throng of faux paparazzi and a Joan Rivers impersonator. Inside, a tattooed DJ with a braided beard was spinning “Let the Sunshine In.’’

In explaining the touches the W uses to cultivate its air of exclusivity and hipness, such as labeling its housekeepers “stylists,’’ Roger Paull, senior director of brand management, told employees that day: “We’re not really a cult, but by using these words, we give [guests] something that is a little cult-like.’’