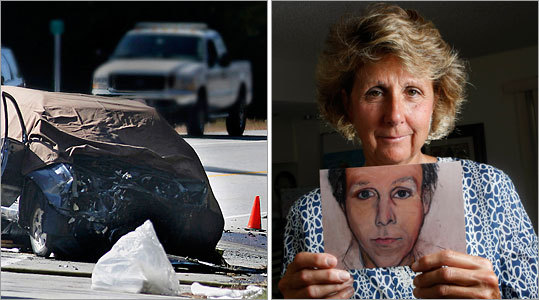 (Left: The Keene Sentinel; Right: AP Photo/Brian Blanco/Globe Special) The blue Toyota Highlander driven by Stephen Lagakos (left) sits in the southbound lane of Route 202 where it stopped after colliding with the Chevrolet driven by Stephen Krause. At right, Colleen Krause poses with a painting of her late husband.
By Erin Ailworth Globe Staff / April 27, 2010

The Toyota Highlander hung back for miles, rolling north along Route 202 a comfortable distance behind the car in front of it. Suddenly, the Highlander zoomed up into the breakdown lane, then swerved across the road into oncoming traffic, colliding head on with a silver Chevrolet.

“The SUV was going so fast, I don’t think the silver compact car’s driver had time to react,’’ according to a written statement to Peterborough police from Mark Dugas, who was driving nearby.

Four people died in that Columbus Day crash near the Peterborough and Jaffrey town lines in New Hampshire. A nearly 160-page accident report, compiled by local officers, could not pinpoint a cause.

Now, federal officials have their eyes on the case.

The National Highway Traffic Safety Administration, which has received two consumer complaints about the case, is sending a team to Massachusetts next month to examine the Highlander, which is being kept at a Billerica salvage yard.

Killed in the accident on Columbus Day were the driver, Harvard professor and medical researcher Stephen Lagakos of Wellesley; his wife Regina; and his mother, Helen. Also killed was the driver of the Chevrolet, Stephen Krause of Keene, N.H.

“We can confirm that the Lagakos family has asked us to look into whether this accident was caused by a sudden unintended acceleration,’’ said Valerie Yarashus, an attorney for the surviving family members. “We are at an early phase of the investigation, and want to investigate this thoroughly.’’

Stephen Krause’s wife, Colleen, said the government’s examination may provide answers about the death of her husband, a father of four, one mile from his job at DD Bean & Sons, a maker of paper book matches.

“For peace of mind, I wish there were some closure,’’ she said. “I don’t know what to tell my children.’’

In recent months, Toyota Motor Corp. has been plagued by allegations that some of its cars can speed out of control on their own. The Japanese automaker has recalled millions of vehicles, saying their gas pedals might stick or that floor mats could jam pedals, and has repeatedly refuted charges that electronic control systems may be at fault.

The company agreed to a federal fine of $16.4 million for failing to notify regulators of a “dangerous pedal defect’’ for nearly four months, the traffic safety agency said last week.

“Toyota sympathizes with the individuals and families involved in any accident involving our vehicles. We are making an all out effort to ensure our vehicles are safe and we remain committed to investigating reported incidents of unintended acceleration in our vehicles quickly,’’ Toyota said in a statement to the Globe yesterday.

Meanwhile, investigations of accidents continue. But even as officials look at new and old cases, determining whether a crash was caused by a sudden acceleration is difficult, investigators say. Some crashes leave no survivors, badly damaged vehicles, and few witnesses. Often, safety officials must pick through hazy memories, competing accounts, and extenuating factors — like weather, or driver impairment from alcohol or drugs — before they can reconstruct a crash or find its cause.

“It’s very rare that you have a motor vehicle accident that you can say was caused by one thing and one thing only,’’ said Jodi Petrucelli, an attorney at Sugarman & Sugarman, a personal injury law firm in Boston. But it’s also hard to ignore the recent problems that Toyota-brand vehicles have had, she said.

Clouding the issue are the number of people — survivors, or the families of victims — that are now looking back at car accidents in recent years and wondering whether sudden acceleration may have played a part. In cases where alcohol or drugs were blamed, or in which criminal charges were filed — and there are several such cases involving New England drivers — there may be incentive to find out whether the cause actually lay with the vehicle.

“I think, as a family member who had an individual involved in one of these accidents, it must be very difficult,’’ Petrucelli said. “They want answers.’’

Toyota, in its statement yesterday, underscored the challenges of accident investigation, noting that “it is important to remember that many of the complaints in the NHTSA database for any manufacturer lack sufficient detail that could help identify the cause of an accident.’’

The company vowed to “work in close partnership with law enforcement agencies and federal regulators with jurisdiction over accident scenes whenever requested.’’

The Lagakos-Krause accident, the worst among the cases reviewed by the Globe, illustrates how difficult the quest for answers can be.

On Columbus Day last year, a sunny holiday, the Lagakos family was returning from a weekend at their summer home in Rindge, N.H., where they celebrated Helen Lagakos’s 94th birthday.

Meanwhile, Stephen Krause, had left his house in Keene, N.H., to run errands before heading to work. According to recollections gathered by police, Krause first dropped his Chevy Suburban at a dealership for some work, and picked up a loaner Chevy Malibu. He then met with a financial planner, stopped for gas, and was going to work when the Highlander hit him.

“I don’t think he had a second to respond, and then: Pow!’’ Mark Dugas, a witness, told the Globe in a recent interview.

Dona Castle, another witness, told the Globe that she clearly remembers being followed by Stephen Lagakos’s Highlander for miles before the crash.

“When I checked him in my rearview mirror, everything seemed normal . . . and then, zoom!’’ she said. “He was staring forward, holding the steering wheel . . . like he was trying not to hit anybody.’’

Peterborough police Sergeant Michael Chapdelaine said his team was in the “early’’ days of its investigation into the crash when, after learning of Toyota’s brewing troubles, they began to suspect that Stephen Lagakos’s car might have accelerated unexpectedly.

Chapdelaine said his team examined the badly damaged Highlander, but didn’t get a look at the car’s pedals. Nor could they retrieve any electronic data that might have shown if the car malfunctioned, Chapdelaine said, because investigators couldn’t get the proper codes from Toyota.

Chapdelaine said investigators eliminated as many possible causes of the crash as they could, including the question of whether there was a medical emergency, but weren’t able to pinpoint what caused the accident.

“The major one that we were unable to rule out was the fact of sudden acceleration,’’ he said. “That’s still looming in the back of my mind that that could have been a possibility, especially at this stage of the game.’’

Jack Middleton, lawyer for Colleen Krause, whose husband Stephen died in the crash, worries that no one will know for sure why Lagakos’s Highlander crashed, but that Toyota might be blamed even without conclusive evidence.

“It may be a defect [in the Toyota], but whether or not we’re going to be able to prove that by the circumstances, I don’t know,’’ he said.

The uncertainty haunts Colleen Krause. In search of answers, in February she reported her husband’s accident to the National Highway Traffic Safety Administration.

Daily, she remembers her husband of nearly 30 years: his ready smile, the days he spent coaching his kids at hockey and baseball when they were young.

“I wish I could tell him now how much he gave me,’’ his adult daughter, Allie, wrote in a message to the Globe. “I am determined to grow into an individual that possesses even some of the wonderful traits that he had.’’

Answers from the traffic safety administration will take time. Federal investigators look at more than 30,000 consumer complaints a year, searching for defects that would “pose a risk to safety,’’ the agency said in a statement to the Globe. Each complaint gets reviewed twice — first by the screener, and later by a specialist with expertise specific to the vehicle component or system being called into question.

“It’s important to note that while there are many complaints of unwanted acceleration in NHTSA’s database concerning Toyota and other vehicles,’’ the agency wrote, “those complaints run a wide gamut in terms of safety risk.’’

Knowing that the safety agency is sending out a team to look at the Highlander, Colleen Krause said she has some hope.

The crashes and victims

Family members of those lost in crashes share their memories.