Stations strive to gain distinctions that audiences, sponsors can hear 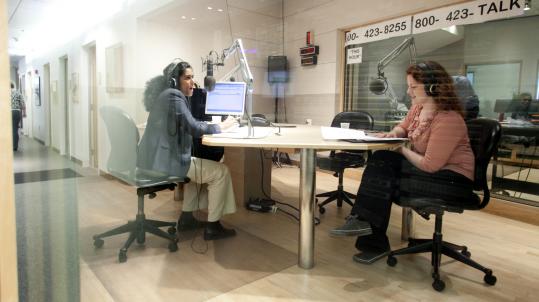 WBUR is beefing up its programming by expanding “Radio Boston,’’ hosted by Meghna Chakrabarti (left) from a weekly to daily show. (Erik Jacobs for The Boston Globe)
By Johnny Diaz Globe Staff / April 17, 2010

During his morning and evening commutes, Mark Van Baalen flips back and forth between WGBH 89.7 FM and WBUR 90.9 FM because he finds the two Boston radio stations are more alike than different.

“There is a lot of duplication and overlap,’’ said Van Baalen, 64, who contributes to both Boston nonprofit stations but had tuned into WGBH more when it had its classical music programs.

Last December, when WGBH reinvented 89.7 to a full-time news talk format, the hope was that it would grow the number of Boston radio news listeners. Instead, it seems WGBH and its fellow National Public Radio broadcaster WBUR are competing for the same pool of listeners — and sponsors — with many of the same programs.

Based on the latest ratings from Arbitron, for the period of Feb. 4 to March 3, WGBH’s audience has grown slightly, while WBUR has lost a modest number of listeners. Meanwhile, WBUR ranks eighth with a 4.5 percent share of Boston listeners compared with 4.8 in January, while WGBH ranked 21st with a 1.2 percent share, a slight increase from 1 percent share in January.

Some listeners say they aren’t committing to just one station because they have similar programming. After all, they both bill themselves as “Boston’s NPR Station’’ (although WGBH adds “for arts and culture’’ to its tag line) and use syndicated NPR shows.

Long term, that ambiguity may hurt both broadcasters as they dip into the same well of listeners at a time when the number of local underwriters and corporate sponsors isn’t growing. Industry observers say that WGBH may have a bit of an advantage because of its arsenal of promotional platforms, including its classical station WCRB 99.5 FM, its nationally known TV division, and its website. WBUR, meanwhile, has its radio division and revamped website.

“There is plenty of overlap in the donor bases,’’ said Scott Fybush, who writes an industry newsletter called Northeast Radio Watch.

The broadcasters are trying to differentiate themselves, though. For one, both outlets have recruited reporters and producers to bolster their news operations as other media outlets are cutting staff.

Jonathan Abbott, president and CEO of WGBH, said: “I think there is room for us to grow.’’

In response to WGBH’s lineup changes, WBUR is expanding its weekly local news magazine show, “Radio Boston,’’ to a daily program beginning May 10. The show will air at 3 p.m., meaning it won’t compete head-to-head with WGBH’s midday shows.

“There is no doubt that ’GBH transitioning to a format that replicates ours and launching two daily local programs helped us get to that end goal’’ of having a local daily show, said Paul La Camera, WBUR’s general manager. “I wish we had done this sooner.’’

Still, WBUR maintains a commanding presence in Boston radio. WBUR has 110 employees, for instance, compared with WGBH radio division’s 30 staffers, who include those who work for WCRB. And WBUR’s audience in the Boston metro area is 80 percent, while WGBH’s is 60 percent.

In recent ratings, WBUR’s noon show, the syndicated “Here and Now,’’ drew an estimated 113,100 listeners in the age 6 and older group each week, compared with WGBH’s “The Emily Rooney Show,’’ which had 18,100. In the 25-54 age group — the audience that advertisers, sponsors, and underwriters seek — WBUR had 55,400 listeners at noon compared to WGBH’s 5,500. Compared with last November when WGBH had a mixed music and news format, the station has held its audience so far this year.

WGBH officials and some radio experts say it’s too early to establish ratings trends for the broadcaster’s new midday shows. And WGBH officials say they don’t measure the station’s numbers against WBUR’s, but rather look to retain and grow WGBH’s audience.

To continue to grow and retain listeners, WGBH has added five people to its radio division, including former BBC correspondent Phillip Martin as an investigative reporter. The station also recruited former Boston Phoenix media critic Adam Reilly as a producer for its “Greater Boston’’ program.

Meanwhile, “The Emily Rooney Show’’ host Rooney is still adjusting to balancing her daily radio and television shows. She welcomes the competition from WBUR’s expansion of “Radio Boston’’ but acknowledges that WBUR has more resources.

“They have a little bit more muscle than we do, but that’s OK. We’re scrappy,’’ she said.

Despite its advantage, WBUR isn’t taking any chances. The station hired Iris Adler, who oversaw the documentary division at New England Cable News, as the executive producer for the beefed up “Radio Boston.’’ The “Radio Boston’’ staff has almost doubled to seven. Meghna Chakrabarti, who hosts the weekly show, will host the daily show as well.

“We are going to do everything in our power to continue to differentiate WBUR from one of those really iconic call letters of WGBH — iconic because of its television station, not because of its radio station,’’ said WBUR’s La Camera.

Meanwhile, some listeners say they aren’t finding much difference between the two stations. “Why would I switch the signal to WGBH if they are playing ‘All Things Considered?’’’ asked Laura Herring, a Milton resident, referring to the popular NPR news show that airs on both stations. “It’s repetitive.’’