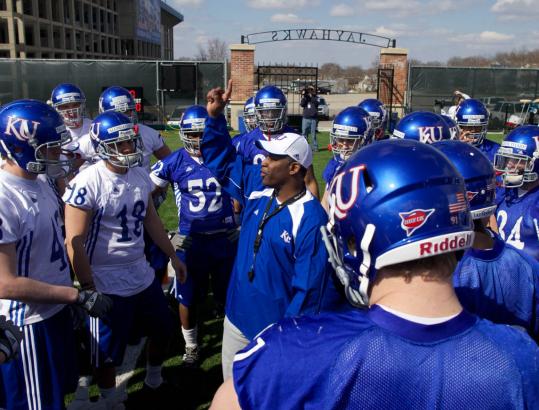 LAWRENCE, Kan. — Season ticket holders know the annual lament. The cost of prime seats keeps rising, even if the team is lousy.

Now, combine that frustration with cash-strapped college athletics departments, struggling to upgrade aging stadiums, and you’ve got the latest innovation in marketing for big-time athletics — the sports mortgage.

At Kansas, Jayhawk fans who sign up to pay up to $105,000 over 10 years will earn the right to buy guaranteed top seats for football over the next three decades. In return, the seats themselves will stay locked in at 2010 prices.

California fans have even more latitude — 30 years to pay for a half-century’s worth of season football tickets. Like a home mortgage, the long-term deal requires the equivalent of annual interest payments.

The new pricing plans are known as “equity seat rights,’’ and are being pitched as a win-win for fans and teams. Diehard fans can be certain of what they’ll pay to see their favorite team well into the future — and can always sell tickets in the secondary market while taking a tax write-off for donating to a school. Teams can bank on extra revenue and avoid borrowing.

Stadium Capital Financing Group, the Chicago company behind the change, says it has the potential to transform how both college and pro teams court their most loyal fans. They’re confident sports mortgages will overtake the personal seat license, which doesn’t necessarily lock in ticket prices.

The only trick now is convincing fans it’s a good deal.

At Kansas, mortgage sales are being targeted at the new 3,000-seat Gridiron Club, an addition to 90-year-old Memorial Stadium in Lawrence that will offer its members cushioned seats, catered food, private restrooms, and preferred parking.

The school hopes the sales will not only cover the costs of $34 million in stadium renovations but eventually will raise a total of $200 million — without going into debt or relying on tax dollars.

That would pay for renovations to Allen Fieldhouse, home of the Kansas basketball team, and build a new “Olympic village’’ for the Jayhawk track and field, soccer, and swim teams. Another $40 million would go toward academics.

Still, problems remain. The Gridiron Club’s planned opening for the 2010 season has been delayed since the school has only been able to raise about $5 million of the needed $34 million, said Jim Marchiony, associate athletics director.

The football team’s 2009 performance likely didn’t help. After winning its first five games, the Jayhawks lost seven in a row. The season ended with the resignation of coach Mark Mangino amid allegations of mental and emotional abuse of players.

California has fared far better with what it calls an endowment seating program.

The top pricing tier costs between $175,000 and $225,000 and provides University Club members with not only prime seats for the next five decades but also sweeping views of San Francisco Bay. However, when the 6 percent annual administrative fee is rolled in, a University Club seat worth $225,000 will cost the buyer more than twice that much when paid out over 30 years.

Professional teams are also paying close attention. Civic leaders in Sacramento are considering mortgages to generate capital for a new arena for the National Basketball Association’s . So are the owners of London-based Tottenham, a Premier League soccer club.