Sowing the oats of prosperity

Her recipe for a healthy morning has drawn a following, but changing breakfast habits is tough 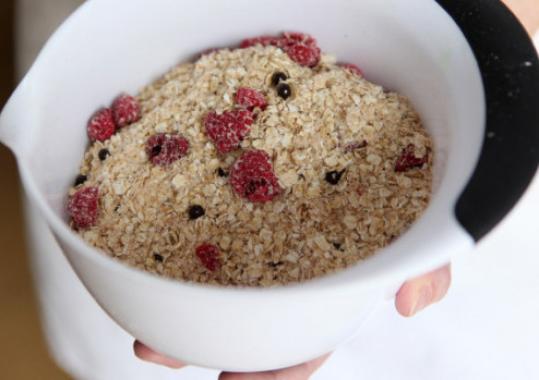 Beth Gallo wasn’t trying to start a business. The South Dartmouth resident, a breast cancer survivor, just wanted to add more healthy food to her diet — preferably in the morning.

So when the 49-year-old mother of two couldn’t find a healthy breakfast food she could get excited about, she began making her own oatmeal with organic oats, dried fruits, nuts, and whey protein powder, changing the mixture over five years to suit her taste.

In 2008, she named her homemade recipe Mad Hectic Oatmeal and designed packaging with childhood photos of herself in pigtails. Now, her oatmeal is sold in 38 locations across Massachusetts and Rhode Island, including three Whole Foods Market stores.

“Most of the oatmeals out there are really boring,’’ Gallo said. “I started making the oatmeal for no business reason at all, just for myself. It solved a problem for me personally. I didn’t know it would do it for other people.’’

Mad Hectic Oatmeal, named for Gallo’s frenzied mornings, has more than tripled its business in the past two years. Still, the tiny company may have a behemoth battle to change the morning eating habits of some consumers.

Hot cereal has transformed from a slow-cooking family meal in the mid-1980s to a quick, popular, individualized breakfast thanks to microwaveable instant oatmeal. But consumers who typically eat frozen waffles or scrambled eggs in the morning are unlikely to switch to oatmeal, said Harry Balzer, chief industry analyst and vice president of NPD Group, a market research firm in Rosemont, Ill.

Last year, nationwide sales of hot cereal declined 2.8 percent to $1.1 billion, according to the Nielsen Co. Hot cereal sales accounted for just 10.8 percent of total cereal sales in 2009, down from 11.3 percent in 2008.

“Habits are very set for breakfast, more so than for any other meal,’’ Balzer said. “The brand may change, but the food typically stays the same.’’

Price may be another barrier for Mad Hectic Oatmeal, which contains 13 to 17 grams of protein and 5 to 6 grams of fiber in each pouch, depending on the flavor. At $7.95 for 12 to 14 ounces, Mad Hectic Oatmeal is about double the cost of some other popular oatmeal brands.

But because Mad Hectic Oatmeal touts health benefits such as increased energy from protein, weight control from fiber, stronger bones from calcium, and a healthier heart from omega-3 oil, the price may not be an issue, NPD Group’s Balzer said. Consumers will often pay a premium for products marketed as quick and healthy, and a small company that promises to make their lives easier “won’t be a small company for very long,’’ Balzer said.

So far, the company is growing at a furious pace. Mad Hectic Foods sold 3,562 pouches of oatmeal in 2009, more than triple its 2008 sales of 1,100 pouches. In January and February of this year alone, Gallo’s company sold 1,555 bags — more than four times as many as it did during the same time period in 2009. Mad Hectic Foods’ sales are projected to exceed $95,000 in 2010, Gallo said, and the company has been close to breaking even in the last few months.

Gallo, her husband, Michael Gallo, and their 21-year-old son, Ethan, run the company out of an office in their South Dartmouth home and manufacture the oatmeal in a commercial kitchen in Mattapoisett. The Gallos’ 13-year-old daughter, Anna, helps taste-test the products. She particularly enjoys the chocolate flavors.

Customers enthusiastically line up for tastings led by Michael Gallo in local stores carrying the oatmeal, said Bonnie Frechette, the marketing team leader for Whole Foods Market in University Heights, R.I., which has been carrying Mad Hectic Oatmeal for about two years.

Frechette, who eats a bowl of the best-selling raspberry almond flavor a few times a week, said Whole Foods could consider carrying Mad Hectic Oatmeal in more stores if it continues selling well. “It’s really great to see a local vendor have such great success,’’ she said.

And Beth Gallo is in the early stages of developing a Mad Hectic pancake mix, which will be higher in protein than common commercially available mixes. The mix does not have a release date, but Gallo said it will be nontraditional and come in unique flavors.