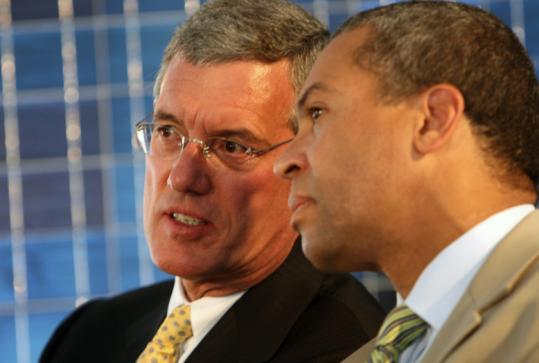 The chief executive of Evergreen Solar Inc. received a nearly half-million dollar bonus for 2009, a year in which the company struggled with mounting losses and announced plans to shift work from its new, state-subsidized factory in Devens to China.

The Marlborough company said chief executive Richard Feldt earned a bonus of $479,991 — 96 percent of his target amount — for meeting a number of goals, most of which were not related to the company’s financial performance. Instead, he received the bonus mostly for meeting operational targets, such as increasing output at the Devens plant and lowering the company’s production costs.

One of the goals Feldt met was to finalize a “subcontract arrangement in China,’’ the deal that will allow the firm to outsource jobs from Devens. The contract was signed in May with Jiawei Solar Co. in Wuhan, China. In November, the company said it would stop assembling solar panels in Devens and move the work to China in order to compete with other solar manufacturers.

The outsourcing could potentially eliminate 150 to 200 jobs in Massachusetts starting in mid-2011.

The company plans to continue making a key component — silicon wafers and solar cells — in Devens. Evergreen has about 700 full-time workers and 257 temporary employees in Devens and Marlborough.

The China contract, however, was responsible for only a small portion of Feldt’s overall bonus. The decision to shift work to China has been controversial because Evergreen received $58 million in state loans, grants, and other aid to build the Devens plant. MassDevelopment, a quasi-public agency, recently voted to give the company an additional $5 million loan, despite Evergreen’s deteriorating financial condition.

A MassDevelopment spokeswoman said the loan has not yet closed. But state officials have said that Evergreen has so far exceeded the target number of jobs it had promised to create in Massachusetts.

Evergreen declined to comment on the bonus. The chairman of the company’s compensation committee, Peter W. Cowden, could not be reached yesterday for comment.

But a trade industry spokesman noted that solar companies have been under intense pressure to control costs.

“If a firm is not able to outsource portions of their work or develop other strategic partnerships, they won’t be in business at all,’’ said Brian R. Gilmore, executive vice president for public affairs at the Associated Industries of Massachusetts.

Feldt and Evergreen’s executive team did get a portion of their bonus for hitting one financial metric — improving the company’s operating cash flow.

Overall financially, though, the company struggled. While revenues nearly tripled, Evergreen was nonetheless brutalized by falling prices and mounting competition and ended the year with an operating loss of about $98 million. Its stock closed yesterday at $1.24, down 2 cents.

One executive compensation specialist, David Wise, said it was unusual that Evergreen weighted so much of the bonus toward operational statistics, such as the cost of producing solar panels, rather than financial performance. Evergreen based just 20 percent of Feldt’s bonus on financial performance, compared with 50 percent or more common in most executive plans, Wise said.

“This incentive plan has less weight on annual financial performance than we typically see,’’ said Wise, a senior consultant with the Hay Group LLC, a management consulting firm, in New York, who advises corporate boards on executive compensation.

Overall, Feldt, who has been chief executive since 2003, received roughly $1.8 million in compensation last year, up 11 percent from 2008, including $527,885 in salary, and the projected value of his stock options and restricted stock.

Check out some of the clean-tech companies in Mass.

A look at the top 10 in the growing green tech field.
Your comment is subject to the rules of our Posting Policy
This comment may appear on your public profile. Public Profile FAQ