Weary from recalls, drivers find even a little shake can rattle 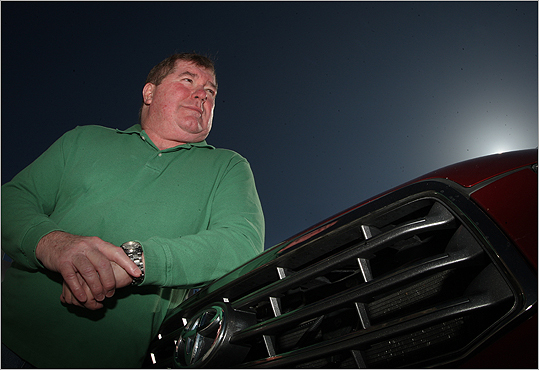 (Essdras M Suarez/Globe staff) Bill Lyons of Quincy, standing by his Highlander, believes the Toyota recall is an electronic problem, not a mechanical one.
By Johnny Diaz Globe Staff / March 10, 2010

Bill Lyons isn’t taking any chances, even though his 2008 Highlander is not one of the millions of Toyotas recalled because they could suddenly accelerate.

To be safe, Lyons, 52, had his car checked out at a dealership. Nothing was wrong, he said. As a further precaution, he now keeps the volume on his radio low to better hear any unusual sounds. He is also driving slower and maintaining more distance between his car and others.

“It’s unfortunate that it had to come to this,’’ the Quincy resident said. “I’m not too paranoid, but certainly disappointed. I guess I will just keep driving my Toyota, very carefully.’’

Like some other drivers, Lyons has come down with a case of auto repair anxiety. The recent Toyota Motor Corp. and General Motors Corp. recalls, which number in the millions, have driven some people - even those who own other brands - to develop an unsettling hyper-awareness of what might be wrong with their cars.

One Boston marketing specialist attributes the behavior to the intense media attention devoted to the rash of recalls. People may believe they have a problem simply because an issue is highly publicized, said Frederic Brunel, an associate professor of marketing at Boston University.

“If there is a lot of information on cancer in the news, people are more likely to think that cancer [accounts for] a higher percentage of deaths’’ than statistics show, said Brunel. The same, he said, holds true for car recalls.

Drivers “may interpret some bizarre random little thing as being this major problem when, in fact, it’s really nothing. . . . A few months ago, they would have kept on driving,’’ he said.

Toyota’s uneven track record on its recent safety issues has reinforced drivers’ suspicions. Initially, the Japanese automaker denied there were serious problems with its vehicles. Then, as a limited recall grew into a massive one, the company was slow to respond publicly.

Some local mechanics and consumer specialists say demand for repairs is up. One reason, they say, is because of the jittery car owners, and another is because people are seeking maintenance they had put off before.

At Hogan Tire in Waltham, assistant manager Mark Triglione said more drivers are bringing their cars to the shop because of publicity surrounding recalls, even if their models are not affected.

“We just had a guy come in with a [Toyota] Corolla because it was making ‘old-car’ noises,’’ Triglione said.

Matthew LeLacheur, executive director of the New England Service Station and Automotive Repair Association Inc., confirmed that many of the trade group’s 400 members have reported an uptick in business compared with the last couple of years.

“It’s too soon to tell whether the Toyota situation has enhanced that,’’ he said, but business is definitely being boosted by drivers hanging onto older cars longer because of the economy.

Whatever the reason, the increase in business is a plus for dealerships and shops eager for any revenue in a down economy; car owners are charged just to have their car put on a lift and inspected, even if no work is performed.

As a side effect of the recall frenzy, auto industry officials and mechanics say, consumers are getting a speedy education on the importance and frequency of recalls.

“Every car company has recalls,’’ said Jerome Brasseur, owner of JCB Auto shop in Allston, but many people may not have realized that until now.

In addition to Toyota and GM, Honda Motor Co. and other automakers have issued various recalls in recent months. And since 1966, 390 million cars, trucks, buses, recreational vehicles, and motorcycles have been recalled for safety issues ranging from minor nuisances to serious safety flaws, according to the National Highway Traffic Safety Administration. Auto manufacturers can initiate their own recalls or they can be triggered by NHTSA investigations or court action.

Joan Claybrook, who headed NHTSA during Jimmy Carter’s presidency, said Toyota’s problems are prompting competitors to review their own quality-control procedures, which ultimately could result in even more cars being called in for fixes. The same thing happened, Claybrook said, when Ford recalled the Pinto under her watch.

“I do expect that every automaker in the world is looking at their electronic systems, they’re looking at their brake overrides,’’ she said. “I don’t know if there are going to be recalls or not.’’

John Paul of AAA Southern New England also suggested that the current wave of recalls may remind drivers of old repair notices they may have received but ignored.

“This heightened awareness of recalls in general may make people more aware of past recalls that went unfulfilled,’’ said Paul, who writes an auto column for The Boston Globe’s website, Boston.com.

Paul said he has been receiving more e-mails from drivers who have held onto their aging cars because of the recession and that, too, may be contributing to worries about perceived problems.

“People are deferring maintenance a little, but now they are paying more attention to squeaks, rattles, and groans that their cars may exhibit as they get older,’’ Paul said.

When Jill Teichmann, 32, of Salem, hears such noises while driving her 2009 Toyota Camry, her paranoia kicks into fifth gear. She asked her father to examine her brakes, even though there have been no braking safety issues reported with her model.

Teichmann’s car is on the list of cars that could have sticky gas pedals and, although she’s had no problem with the pedal, she plans to take it to her dealer this week to be modified.

“Usually if it there was a recall, I would wash it aside,’’ she said. “Now that it’s everywhere, it makes me more concerned.’’

Erin Ailworth of the Globe staff contributed to this report. Johnny Diaz can be reached at jodiaz@globe.com.