US to review Prius in Calif. freeway incident 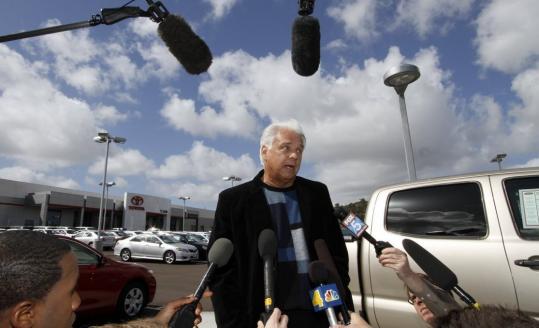 EL CAJON, Calif. - The government sent investigators yesterday to examine a Prius that sped out of control on a California freeway, and Toyota said it wanted to interview the driver as the besieged automaker dealt with a high-profile new headache that raised questions about the safety of its beloved hybrid.

A day after state troopers helped the car slow to a stop and its driver to emerge unharmed, Toyota could shed no new light on what might have gone wrong. The Prius is not part of Toyota’s vast recall of gas pedals that can become stuck, but it is covered by an earlier recall of floor mats that can catch the accelerator.

The freeway incident happened at the worst possible time for Toyota - just hours after it invited reporters Monday to hear experts insist that electronic flaws could not cause cars to speed out of control under real driving conditions.

Another Toyota spokesman, John Hanson, said the company wanted to talk to the driver, James Sikes.

His car, a 2008 model, was covered by the floor mat recall, but Sikes said the pedal jammed and was not trapped under the mat.

Sikes told authorities he was driving on Interstate 8 outside San Diego when the accelerator became stuck. He said the car reached 94 miles per hour before a trooper, calling out instructions from a megaphone, helped him slow down and turn off the engine.

Sikes’s wife, Patty, said yesterday the family’s Prius appeared to have a brief accelerator malfunction a few weeks ago. “It took off for a second, and then it just stopped. It was like a little hiccup or something,’’ she said.

Sikes, 61, said he called 911 about 1:30 p.m. Monday after accelerating to pass another car on Interstate 8 near La Posta.

“I pushed the gas pedal to pass a car, and it did something kind of funny. . . . It jumped, and it just stuck there,’’ he said.

A patrol car pulled alongside the Prius and the officer told Sikes over a loudspeaker to push the brake pedal to the floor and apply the emergency brake.

The braking, coupled with a steep incline on the freeway, slowed the car to about 50 miles per hour. Sikes said he then shut off the engine and the car coasted to a stop. CHP Officer Todd Neibert then moved his car in front of the Prius to block it.