In his second campaign for governor, businessman Christy Mihos characterizes himself as a watchdog of taxpayers’ money. Yet the multimillionaire Republican is struggling with financial troubles: A bank rejected his company’s request for a line of credit, and he’s bounced multiple checks and repeatedly failed to pay business suppliers and political staffers.

Yesterday, his onetime campaign manager, Joseph Manzoli, became the fifth former political aide to claim Mihos has not paid him after he left the campaign. Manzoli says he is owed more than $40,000.

In interviews with the Globe, Mihos repeatedly dismissed the money problems as products of disgruntled staffers or one-time events, such as a lawsuit earlier this year filed by a gasoline supplier to his stores seeking $634,000.

“This is the first time in 40 years of me either being a full-timer at Christy’s, or as president and CEO or owner, that we’ve had any type of dispute,’’ Mihos said of the lawsuit from Noonan Brothers Petroleum Products Inc. The West Bridgewater company sued for back payment on several deliveries; the parties settled last week for an undisclosed amount.

But court records show that Noonan Brothers was the fourth vendor to sue Mihos since late 2008, all for the same reason: They say they delivered fuel or other products, and didn’t get paid.

On the campaign front, the financial problems were evident last month, when the balance on his political fund dipped below $1,000 and Mihos bounced a $20,000 personal check he wrote to replenish the account. The problems have left him unable to pay campaign workers on time, leading to messy departures.

The money troubles contrast sharply with the outward appearance of Mihos as a successful businessman. In 1998, he sold 132 of his Christy’s convenience stores to Southland Corp., operator of 7-Eleven stores, which reported paying $33 million for them and for 20 other convenience stores owned by a chain in Indiana, according to the company’s filings to the Securities and Exchange Commission. The proceeds were shared among Mihos and family members. A year ago, he sold 11 of his stores to Hess Corp., for an undisclosed amount.

Mihos and his wife, Andrea, live in a 5,851-square-foot oceanfront home in the gated community of Great Island in West Yarmouth. Mihos said he bought it for $5.3 million in 1998. He had mortgages on the property for a total of $7.5 million, according to county deeds records, but Mihos said he has substantially paid down one of those, a $3 million loan.

He also owns the neighboring house, which he bought in 2004 for $5.5 million, and he rents a condo at the tony Rowes Wharf building on the Boston waterfront.

Mihos still owns three Christy’s stores on Cape Cod, but his business is evolving; he is now focused on developing and selling locations for new stores, rather than operating them.

Mihos insisted to the Globe that his financial disputes with gas vendors and former campaign staffers were the result of legitimate billing and accounting disagreements, not indicative of deeper financial problems.

“We have had disputes as it happens in business all the time when contracts are not met, things are delayed, someone does a bad job,’’ Mihos wrote in an e-mail. “In the past when they happened, we were fortunate to settle these disputes.’’

But in court papers in the Noonan lawsuit, Mihos acknowledged his business was having problems.

For example, Mihos explained in an affidavit that, in one case, he had been unable to sell two of the properties because abutters had sued over the permits, resulting in “cash flow difficulties.’’ In another he blamed a permitting snafu last year for holding up the sale of interest in property in Bourne to Hess.

Mihos disclosed in the affidavit that his company applied for a line of credit from Eastern Bank last fall to deal with those cash flow problems, but was rejected.

“This is happening to us because we’re trying to make a little company work in a highly seasonal area,’’ Mihos added in an interview. “To get up and running, it takes two to three million to get a store built and opened. Things are tough right now. Banks aren’t lending, no matter who you are.’’

In its lawsuit, Noonan Brothers quoted from what it said were e-mail excerpts of Mihos’s promises and explanations for the delay in payments over a five-month period culminating in January 2010.

“We are shooting for a large pay down on Friday,’’ Mihos wrote Noonan Brothers on Aug. 12.

Then on Oct. 30, he wrote: “[E]verything has been approved and I am waiting for the legal docs to sign and close.’’

Nonetheless, the firm continued to supply gas to his stores. On Jan. 29, a check Christy’s sent to Noonan Brothers for $26,247 bounced, according to court filings.

“All I can tell you is that we’re absolutely thrilled this is settled,’’ Mihos said. “Like they have been in the last two decades, the Noonan trucks still supply us with gas and diesel each and every day.’’ Noonan Brothers declined to comment.

The delay in the Noonan case is echoed by an employee of Gulf Oil LP, which in December 2008 sued Mihos for $129,681 over unpaid gas deliveries. Christine Stagno-Garcia, a credit representative for Gulf, said in an affidavit that her requests to Christy’s over eight months for payment were unmet.

Said Stagno-Garcia: “The only reason ever given by Christy’s for the failure to make payment was bookkeeping differences.’’

Mihos said he had been unhappy with Gulf because the company attempted to change payment terms and other language after they agreed to a contract. He also alleged the company withheld for seven months $70,000 in credit card reimbursements owed him.

Mihos settled with Gulf in March 2009.

Hubbard Oil Co. of Hyannis sued Christy’s twice to get paid. In November 2008 Hubbard sued for more than $55,000 in unpaid gas bills, and sued again in June 2009 when Mihos’s company failed to comply with a settlement the sides had reached.

Mihos and his attorney, Michael Dissette, said Christy’s and Hubbard had a series of disagreements, with Mihos accusing Hubbard of failing to timely reimburse Christy’s for credit card sales. Mihos said he bought out Hubbard’s contract through a separate consulting agreement in which he committed to paying the firm $10,461 a month until August of 2014. Hubbard did not return calls for comment.

And in July of 2009, Citgo Petroleum Corp. accused Mihos of failing to pay for $123,371 in marketing materials provided to his stores. The suit, filed in Harris County, Texas, was withdrawn after Mihos’s lawyers challenged the court’s jurisdiction. An attorney for Citgo did not respond to requests for comment.

When he ran as an independent candidate for governor in 2006, Mihos spent $4 million and garnered 7 percent of the vote. This year, he is running as a Republican and had promised to spend whatever it takes to be competitive.

With the Republican convention scheduled for next month, Mihos has spent more than $300,000 of his money, but has raised only a small amount from donors. His primary opponent, former Harvard Pilgrim Health Care chief executive Charles Baker, has raised more than $2.5 million.

Mihos declined to disclose his personal wealth or discuss his personal finances. He said a 2007 cancer diagnosis prompted him to put assets under his wife’s name and in trusts for his children.

Mihos said some of the bounced checks were the result of bank problems - including a check cashed twice and a hold on funds because an electronic system was being updated.

Manzoli, who announced his resignation yesterday, said the Mihos campaign had money problems - something he had denied in an earlier interview.

Mihos yesterday promised to pay Manzoli when his campaign has the money. He also accused Sowyrda and Fudge of exaggerating their situations in retaliation for being fired, and suggested some were trying to milk him for money they weren’t owed.

“When you run for political office, people say and do things for money,’’ he said.

Yesterday, Mihos said he will not give up in his campaign for governor: “I’m not a quitter. I’ve got Spartan blood,’’ Mihos said. “I’ll die for principle.’’ 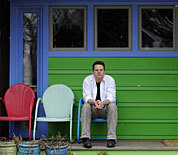 (Gretchen Ertl for The Boston Globe) Web designer Geoffrey Fudge is one of several sitting out the rest of the Mihos campaign.
Your comment is subject to the rules of our Posting Policy
This comment may appear on your public profile. Public Profile FAQ