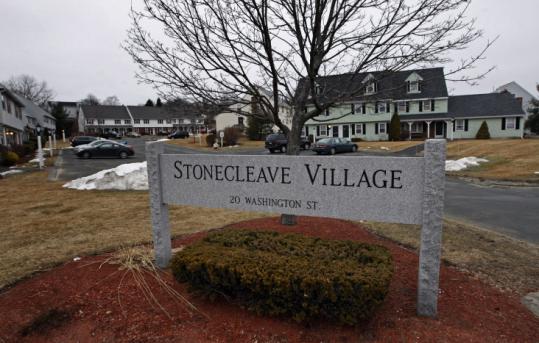 The defendants for Stonecleave Village condos in Methuen, through a lawyer, denied they discriminated against anybody. (Jim Davis/Globe Staff)
By Jenifer B. McKim Globe Staff / February 26, 2010

METHUEN - On several days last June, a photographer snapped shots of children playing Wiffle ball in the grassy common area of their 78-unit condominium complex. The pictures were not intended for a family album, authorities say, but as evidence that five families were violating a rule prohibiting organized sports on the grounds.

The photos, taken by a condo association board member, led to fees and fines of about $2,500 for the children’s families. But the move also created problems for condo management: US Attorney Carmen M. Ortiz is charging Stonecleave Village Association Inc., Property Management of Andover Inc., and its property manager, Elaine Romano, with discriminating against families with children at the complex, while allowing some adult residents to violate association regulations without penalty.

In a civil lawsuit filed last week in US District Court, Ortiz also alleges Stonecleave Village management unfairly charged families attorney fees related to the violations. And she said the defendants “retaliated’’ against one mother by charging her an additional $1,000 for the cost of defending themselves against an earlier complaint to the Massachusetts Commission Against Discrimination.

“Defendants discriminated against residents with children and coerced, intimidated, threatened, or interfered with their rights under the Fair Housing Act,’’ Ortiz said in the suit filed on behalf of the Methuen families, which include 11 children.

The condo complex defendants, through a lawyer, denied they discriminated against anybody.

“Stonecleave Village is a democracy and, like other condominiums, is governed by rules,’’ said lawyer Joshua B. Walls, in a written statement. “The individuals who choose to live in condominiums specifically agree to abide by condominium rules.’’

One mother declined to discuss the conflict, while other parents involved in the case did not respond to requests for comment.

The suit highlights the lack of play space for many children who grow up in apartment buildings and condo complexes, federal housing officials and lawyers say.

In 2007, a St. Louis apartment complex reached a $170,000 settlement with the US Department of Housing and Urban Development after complaints that managers regularly threatened to evict families who let their children play without supervision. Usually, however, such disputes rarely make it to federal court.

“A lot of times people are being threatened, they are just scared,’’ said Craig P. Fagan, a California lawyer who specializes in discrimination law. “You have to accommodate children.’’

The play problems at Stonecleave Village began in 2008 after residents complained children were “running from yard to yard,’’ creating “unacceptable noise’’ in the common area that serves as the backyard at the complex, according to the suit. To address complaints, the association reminded residents to abide by the bylaw banning organized sports in the common area unless they are approved by the board.

As an alternative, the association designated a field at the rear of the complex as a play area. Parents objected, saying the field abuts woods on two sides and is not near most of the townhouses, making it harder for them to watch their children.

As a result, Laurin Kibildis, one of the parents, filed a complaint in August 2008 with the state Commission Against Discrimination. The commission found there was insufficient evidence to substantiate Kibildis’s claim that the complex was inhospitable to children.

Despite more warnings from the association, some children kept playing in the common area and were photographed in June of last year, according to the lawsuit. Days later, a resident complained to the property manager that children were “playing and screaming.’’

Romano, the property manager, hired a lawyer to assess the children’s families nearly $500 each in fines and legal costs, according to suit, using the photos as evidence. Kibildis complained about the fines and was later charged an additional $1,000 in lawyers’ fees, purportedly to cover costs of her state discrimination complaint, the suit says.

Ortiz said the condo association refused to provide the children’s parents with the photos. And to keep children from using the common area as a playing field, courts papers say, the association planted trees to break up the space.

But adult residents did not face the same scrutiny about how they used the common area, according to the suit. One resident used the area for a Memorial Day weekend barbeque in 2008, apparently without incurring the wrath of the association, despite a rule against gatherings of more than 10 people without approval.

The families filed a complaint last year with the US Department of Housing and Urban Development, which found there was reason to believe discrimination had occurred. The defendants, who had the option of having the case heard by HUD or in court, chose the latter. Ortiz is seeking unspecified monetary damages.

“These charges point to a disturbing practice where families were literally expected to pay to play,’’ said the US Department of Housing and Urban Development’s John D. Trasviña, at the time. “It’s clearly illegal to impose different rules and restrictions on families with children and then to retaliate against them should they complain about their mistreatment.’’

Stonecleave Village residents not involved in the legal action worry about how it might affect their property values and monthly fees. And they differ on whether the bylaw against children playing is too tough.

“They broke the rules,’’ said Kristine Maginnis. “The rules are fairly enforced against both adults and kids.’’

But others, like Michele Harris, said the condo association is being hard on children.

Globe correspondent Cindy Atoji Keene contributed to this report. Jenifer B. McKim can be reached at jmckim@globe.com.